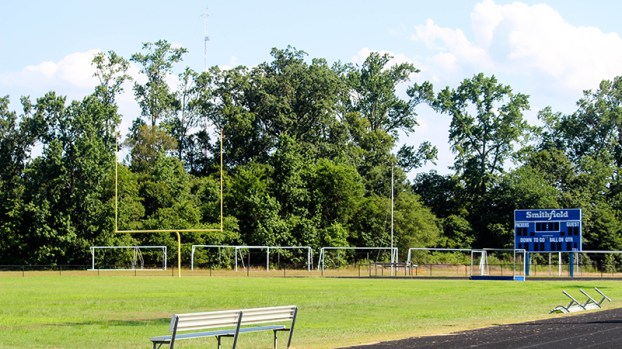 Smithfield High School's football stadium and athletic areas were silent on a recent summer weekday in July. New statewide rules proposed by the VHSL in response to the coronavirus will likely mean no high school football this fall.

No high school football this fall

The coronavirus will keep Smithfield and Windsor High School’s football teams off the field this fall.

And other Isle of Wight student-athletes can also expect changes to their season as well. The executive committee of the Virginia High School League, the entity that sets the rules for interscholastic public high school sports, plans to decide on how to resume sports and activities on July 27.

When news broke earlier this month that none of the VHSL’s three proposed models to reopen sports and activities include fall football, the shockwaves were felt statewide, including in Western Tidewater.

“Regardless of what they end up deciding … high school football is not going to happen in the fall, and that’s very tough,” school division spokeswoman Lynn Briggs said. The ongoing coronavirus pandemic will also likely force the cancellation of another important tradition — homecoming games, parades and events.

Especially in smaller communities like Smithfield and Windsor, “there’s always been so much focus on sports. It brings the community together,” Briggs continued. “It is going to, I think, create kind of a void in some respects in the community because they aren’t going to have those events like the Friday night football games to come out and watch, at least not this fall.”

The VHSL is considering three models for activities. In the first, all sports would remain in their current seasons. Golf and cross country would play but football, volleyball, field hockey and cheer would not. In the second model, the fall and spring seasons would switch places. Track and field, tennis, soccer, baseball, and softball would play in the fall, but boys’ and girls’ lacrosse would not.

“All our efforts will continue towards advocating for the opening of sports and activities in a safe and reasonable way that will protect athletes, activity participants, coaches, officials, and the public,” Billy Haun, VHSL’s executive director, said in a statement. He added that the organization’s decisions will be “based on the best available information and directives,” from Gov. Ralph Northam, the Virginia Department of Health and the Virginia Department of Education.

Christopher Coleman, Isle of Wight school division’s executive director of support services and operations, said the division has also created its own plans and standards for resuming sports.

Last week, he said all of the athletic directors, coaches and administrators met virtually to review the multiple sets of local, regional and state-level guidelines that will set the stage for how sports and activities resume.

The decisions made by local and state officials will affect hundreds of students at the division’s two high schools. In addition to football, basketball and baseball, the division also sponsors teams that participate in soccer, wrestling, swimming, golf, cross country, volleyball, theater, scholastic bowl, robotics, debate and e-sports.

In Isle of Wight, before any team can start activities, Coleman said coaches must turn in practice plans to the athletic director for approval. The plans include daily health screening and cleaning protocols, physical distancing guidelines, hydration, and what types of practice activities will be conducted.

“I know some coaches are literally on the edge of their chair with the practice plan ready to send to the athletic director so it can be signed off on,” he said. And upon returning, Isle of Wight athletes will also be limited to two hours of physical conditioning for the first two weeks of resuming activities. “A lot of the students have been at home, they haven’t been as active as normal,” Coleman continued. He said this will ensure coaches “really take it slow” before moving into heavy physical training.

Each team will also have a parent meeting, where the guidelines will be presented and discussed.

In its announcement that a decision is expected on July 27, Shannon Butler, the VHSL’s executive committee chairwoman, said “the goal in all our discussions has been to provide our student-athletes and activity participants the best opportunity to return to the playing fields, courts, track, and stages during this school year in a safe environment as possible.”

But because all of the proposals on how to structure the upcoming seasons require compromises, in Isle of Wight, “whatever decision the VHSL goes with, we’re still going to have to figure out how that’s going to look,” Briggs said.

The School Board will hold a community input meeting at 6 p.m. on July 28 in the cafeteria at Westside Elementary School, 800 Main St., in Smithfield, to receive public comments on the reopening of schools in the fall. Guests should enter through the front door at Westside, and all those in attendance must wear a face covering. Speakers will have three minutes for their remarks and comments are limited to school reopening. The meeting will be broadcast live on Facebook and YouTube.