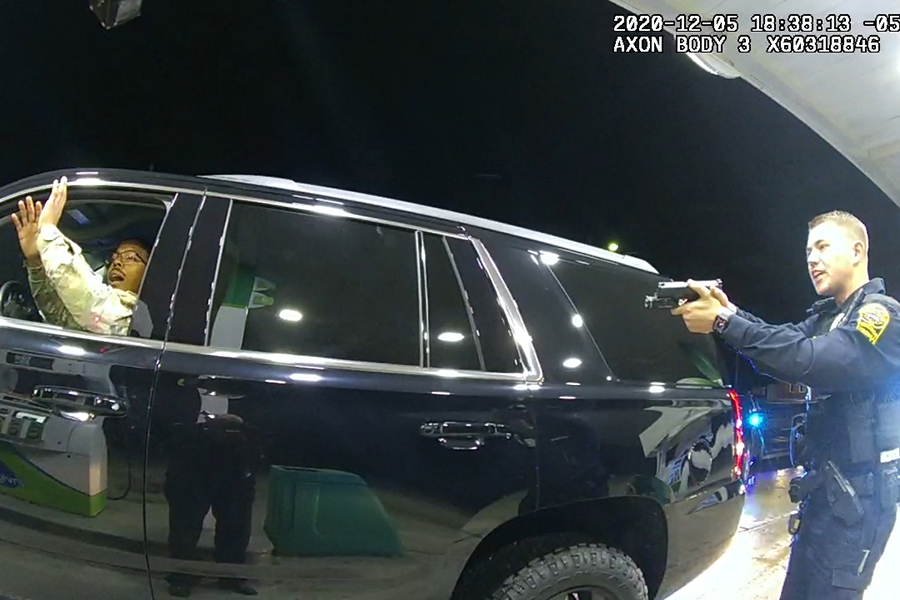 Nazario, who is described in the lawsuit as of Black and Latinx descent, filed the lawsuit in Norfolk’s federal court April 2. It names Crocker and ex-Windsor police officer Joe Gutierrez as co-defendants, accusing each of racially-motivated police brutality during a traffic stop last December when both officers held the lieutenant at gunpoint and Gutierrez pepper-sprayed him.

The two had pulled Nazario over for allegedly not having a rear license plate. Nazario had a temporary New York license plate displayed in his vehicle’s rear window, but the officers said they didn’t see it and accused the lieutenant of eluding police when he drove roughly a mile down Route 460 to a BP gas station before stopping.

Body camera footage of the incident went viral online in April, resulting in Gutierrez’s firing on April 11 — but not Crocker’s — and state and federal probes into the department’s conduct. The Virginia State Police has completed its investigation of the incident and provided its report to Hampton Commonwealth’s Attorney Anton Bell, who’s been appointed a special prosecutor in the matter. But concurrent investigations by Virginia Attorney Mark Herring’s Office for Civil Rights and the FBI are still pending.

Crocker, on May 17, had asked the court to stay Nazario’s lawsuit until each of these separate investigations was complete, arguing that should he choose to exercise his Fifth Amendment right against self-incrimination, doing so could undermine his interests in the civil matter. But should he waive that right and testify in the civil matter, his words could potentially be used against him should any of the pending investigations result in criminal prosecution. Gutierrez joined in Crocker’s request for a stay May 24.

Nazario, however, argued a delay would make it more likely that documents would be misplaced, the officers’ memories of the incident would become less clear and the officers may have fewer monetary resources available should the civil trial award any financial judgment in Nazario’s favor.

“The Court is inclined to agree with Plaintiff,” writes Judge Roderick C. Young in his June 29 ruling.

Young further writes that neither Gutierrez nor Crocker is currently involved in an active criminal proceeding concerning the incident, and that since the government is not involved in the civil suit, “the government cannot gain an advantage to be used in a later criminal proceeding” against either defendant. “Therefore, the cost of Defendants using their Fifth Amendment privileges at this point in the proceedings is not so great as to require a stay at this time.”

An initial pre-trial conference has been scheduled for 9:15 a.m. July 20 in Courtroom 5 of the Walter E. Hoffman United States Courthouse in Norfolk, at which a trial date will be set.