The adventures of Miss Kitt: a cat story you won’t believe 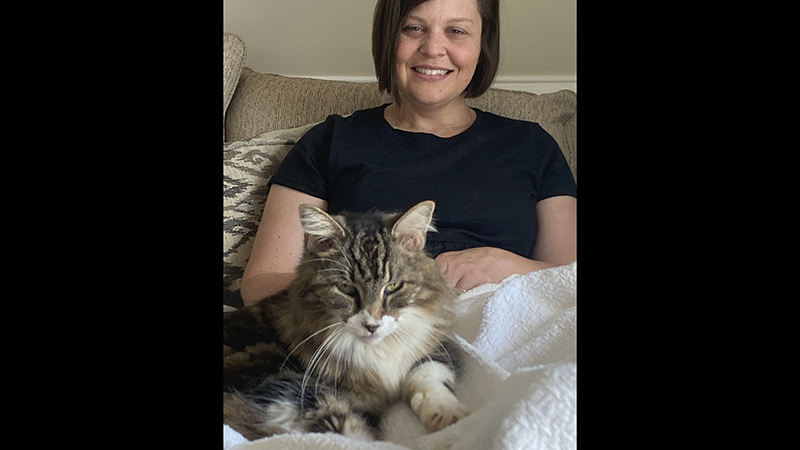 Miss Kitt with Rhonda Stewart — a happy reunion on the Pagan. (Photo by Steve Stewart)

Owning a newspaper in a small town can carry a certain celebrity status, but the first Stewart to make a splash in Smithfield wasn’t my wife or me.

Miss Kitt, our fourth-born family pet and only cat, was the talk of the historic district for a few weeks in the spring when she slipped out of our home at the foot of Wharf Hill on a busy day of painting and unpacking.

For a week or more, Rhonda knocked on doors and handed out fliers. The good folks at Wharf Hill Brewing Co. and Cure Coffeehouse gave Miss Kitt a prominent place in their windows. A post on Nextdoor, the social media site, brought many words of encouragement — and more than a few heartbreak emojis from animal lovers who understood our despair. Rhonda tacked fliers to every light pole downtown, which I’m pretty sure made her a lawbreaker before she was even a registered voter.

On our morning walks, we’d take the cat’s treat jar and shake it as we walked. There were a few sightings — and well-intentioned false leads. A mad dash to Thomas Street after a sighting one Sunday afternoon came up empty in the pursuit of Miss Kitt, but we met a kind neighbor who put out a water bowl in her flower bed and gave us standing permission to walk through her yard to check an old shed, and stray cat habitat, on the lot behind hers. We did so daily.

After a couple of weeks, I gave up hope. It took Rhonda a few weeks longer, inspired by neighbor Mike Smith’s confident prediction that the cat would come home one day. There was a previous time, in another town, when the cat left for a night or two, only to come home smelling like marijuana. She’d spent the night with some college kids in the basement of the house next door.

Over dinner at Wharf Hill one night in June, I urged Rhonda to take the cat’s picture out of the window and free up the space for another worthy cause. She did, and at that moment, we made our peace with never seeing Miss Kitt again.

Flash forward two months and a day. As we sat down for dinner with John and Anne Edwards Friday night at Smithfield Station, an unusual text message prompted Rhonda to ask to be excused from the table.

She returned with a look of equal parts bewilderment and joy that I’d not seen in 14 years of marriage. Miss Kitt had been found by a young woman in the College Drive area of North Suffolk, 30 minutes, 18 miles and, as John noted, three really long bridges away. There were pictures to prove it.

Our hero had been walking her dog at her apartment complex when Miss Kitt emerged from some reeds, demanding attention, much the way she came into our lives as a stray six years ago in Franklin.

We were reunited in the Kroger Marketplace parking lot a few hours after the text message, which came from a national database of microchipped pets. Miss Kitt’s rescuer had taken her to a pet store to be scanned for the microchip that Rhonda had a vet embed years ago — a technological marvel that I didn’t know existed.

Cypress Creek Veterinary Hospital, despite being double-booked with appointments on Saturday morning, worked in Miss Kitt for an evaluation, which we appreciated deeply. She’d lost half her weight and chipped a tooth during her two months away. And somewhere along the way, her claws had been clipped, one of the few clues in our unsolved mystery.

The clipped claws meant someone else possessed her at least for a period, and likely took her to North Suffolk. Surely she didn’t walk there. Surely? Did her new family throw her out? Or did Miss Kitt, who, as our furniture bears witness, was quite proud of her claws, leave in protest, taking her chances again in the wild?

There’s another theory that seems less plausible. The day Miss Kitt disappeared, Rhonda drove through North Suffolk on the way to a carpet store in Portsmouth. Perhaps Miss Kitt, in seeking some solitude from all the commotion in the house that day, went to the garage, crawled into an underneath nook in our SUV, froze when the car started backing out and clung for dear life along Bridge Road before jumping out at a red light.

She declined to be interviewed for this column, so we’ll never know. But our beloved Miss Kitt is back home, a cat story for the ages.

Reflections on a father’s enduring influences

No place for Luter attacks in Pierceville debate

Hoping Americans ‘do the right thing,’ as Churchill said…