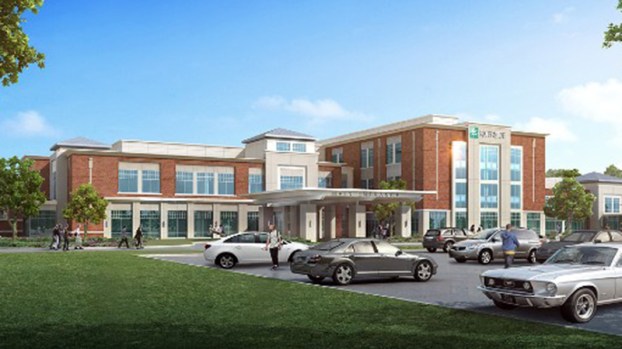 This is an artist’s rendering of the proposed new Riverside hospital in Isle of Wight County. Submitted | Riverside Health System

The VDH issued its report on Oct. 19, six days after holding a virtual public hearing on the matter.

Since 1973, Virginia has utilized the certificate of public need process, which requires state approval for the construction of new hospitals or the expansion of an existing one. The state considers Riverside’s proposal to be “competing” with a proposed 27-bed addition to Sentara Leigh Hospital in Norfolk, since both would serve the VDH’s Planning District 20.

The report concludes Sentara “has adequately demonstrated an institutional need to increase its medical-surgical inventory to properly care for its patient population.” But, on the other hand, “the status quo is a preferable alternative” to the Riverside project, which “unnecessarily duplicates existing services already available in surplus in PD 20.”

“Inpatient bed services currently exist within a 30-minute drive for at least 95% of the population of PD 20 and approval of the proposed project would not improve geographic access to inpatient bed services for persons in PD 20 in any meaningful way,” the report states.

During the public hearing, however, a number of speakers argued it can take upwards of half an hour for Isle of Wight’s ambulances to reach hospitals in neighboring localities, particularly if they get stuck in traffic on the James River Bridge due to a draw bridge opening on their way to Riverside’s Newport News hospital. Kinsey Chilcutt, who spoke on behalf of Surry’s Office of Emergency Services, said Surry’s distance from hospitals in Suffolk, the Peninsula and the Petersburg metro area — coupled with the county’s having only two paid emergency medical technicians on duty each day — make it “extremely challenging to provide professional care in a timely manner.”

“We are deeply disappointed by the initial recommendation that was communicated Tuesday, Oct. 19, by staff at the Virginia Department of Health to deny the proposed Riverside Smithfield Hospital,” said Riverside Chief Executive Officer Bill Downey in a statement. “Thousands of residents, the leadership and first responders across Isle of Wight and Surry counties made clear their support, both in personal testimony and in written signature, for Riverside Smithfield Hospital. It is unfortunate that many of the men, women and children in these counties, both of which are federally recognized as Medically Underserved Areas, have inadequate access to quality healthcare services and limited choice in providers. We remain steadfast in our commitment to support the improvement of access to high quality healthcare and believe there are numerous reasons for the Commissioner to approve Riverside Smithfield Hospital. We will continue to work with those at the Virginia Department of Health and the Commissioner, who will ultimately make the final decision, to clearly demonstrate the public need for Riverside Smithfield Hospital. We want to thank the many residents, local officials and first-responders who provided such a tremendous outpouring of support.”

Local officials were equally dismayed upon learning of the report’s recommendation.

“That’s very disturbing for me,” said Smithfield Mayor Carter Williams. “I mean, this was a golden opportunity for this area to receive the health care that other areas in Hampton Roads took for granted. Hopefully someone, somewhere will open their eyes to the public need in this area.”

“I am disappointed by the denial recommendation for the Riverside hospital just outside of Smithfield,” said Smithfield Town Manager Michael Stallings. “The facility would have been a huge assist to our citizens and would have improved the level of service that our first responders are able to provide.”

Isle of Wight County Board of Supervisors Chairman Dick Grice said he hadn’t seen the report at the time The Smithfield Times called on Oct. 20.

“The recommendation from VDH staff is disappointing, but we are hopeful that the Commissioner will favorably consider the application,” said Assistant County Administrator Don Robertson. “As our community grows, so does the need for a full-service hospital within our local borders. The Riverside Smithfield Hospital as proposed would save lives, provide additional healthcare options for our community, and create hundreds of employment opportunities for current and future professionals.”

Surry County Administrator Melissa Rollins said she and others in the county government were “shocked by the decision.”

“Surry County citizens would benefit from having close access to medical care,” she said.

According to Piero Mannino, supervisor of the VDH’s Division of Certificate of Public Need, now that the VDH recommendation for denial is on record, the Riverside project will head to an “informal fact-finding conference” where the applicant will have another opportunity to make its case for the project to an “adjudication officer.”

That conference is scheduled for 10 a.m. Nov. 5 in Board Room No. 1 on the second floor of the VDH’s Perimeter Center, located at 9960 Mayland Drive, Henrico.

That officer’s recommendation will then go to State Health Commissioner Dr. Norman Oliver for a final decision, which is to be announced Dec. 8.

Editor’s note: This story has been updated to include remarks from local officials.

Chairwoman Jackie Carr announced at the conclusion of the Isle of Wight County School Board’s Oct. 14 meeting that she... read more