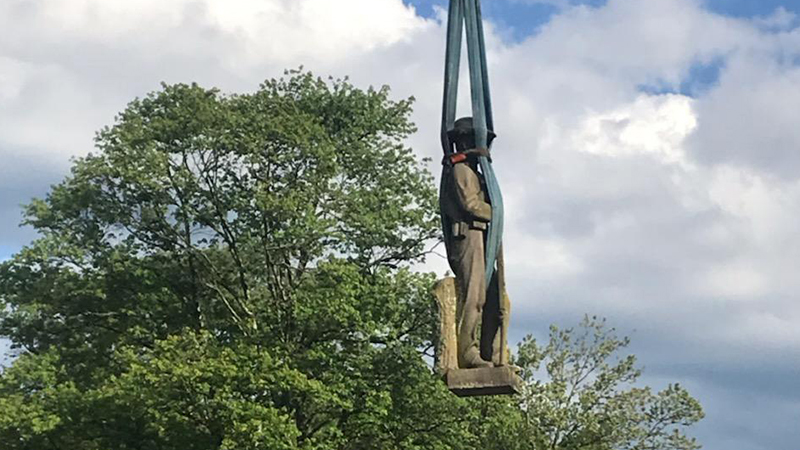 A crane lifts the soldier figure off the granite monument.

In October 2020, Washington, D.C.-based photographer Melissa Lyttle traveled to a cemetery in Frederick, Maryland, where two Confederate monuments had been pulled down and vandalized.

There, she met a historian who — upon learning of her intention to photograph the damage — invited her to view the monuments’ remains, which were housed in a small shed near his on-site office, tucked alongside a wheelbarrow, shovels and other grave-digging equipment.

The fragments were wrapped in a tarp and still covered in spray paint. When she’d asked why they hadn’t been cleaned, she recalls he’d answered, “That’s history too.”

The encounter marked the beginning of her 15-month mission to document the fate of dozens of similar monuments taken down in the wake of the nationwide protests and monument-toppling that followed the May 25, 2020, murder of George Floyd, an African American man, at the hands of former Minneapolis police officer Derek Chauvin.

After receiving grants from the Pulitzer Center for Reporting, the National Press Photographers Foundation and the W. Eugene Smith Fund in 2021, she set out on a 7,300-mile road trip to — in her words — create a record of an unraveling where long-held narratives about Southern pride and memorialization of Civil War leaders are literally being knocked off their pedestals.

The resulting nationwide photography series, titled “Where They Once Stood,” will feature Isle of Wight County’s Confederate monument — but not Surry’s.

“It’s just been trying to get access to as many as possible,” Lyttle said. “I’m not always successful. I get through about half the time.”

Isle of Wight’s 116-year-old monument came down on May 8, 2021, nearly three months after the county’s Board of Supervisors voted to remove it. Five months prior to that vote, the matter had been put to a public hearing, which drew nearly even crowds of residents for and against the statue’s removal — some arguing that it glorified the Confederacy and white supremacy, others arguing removal would be tantamount to erasing history.

It now stands re-erected and visible from Walters Highway — from which Lyttle was able to photograph it — on private property owned by county residents Volpe and Jennifer Boykin.

The Boykins submitted the sole proposal Isle of Wight County received during the 30-day, state-mandated window for museums, battlefields and the like to express an interest in claiming Confederate monuments that localities have opted to remove.

“Very few have been taken in by private individuals … it says a lot about who they are, that they’ve taken these in,” Lyttle said.

But when she tried to arrange for permission to visit and photograph Surry County’s monument in November, she met resistance from Sons of Confederate Veterans Camp No. 9 Commander Mike Armistead.

Surry’s Board of Supervisors voted in 2020 to deed the circa-1909 monument to the Sons of Confederate Veterans after deciding earlier that year to remove it from outside the county’s courthouse. Per that agreement, it will be moved to private property at 384 Mount Ivy Lane near Chippokes Plantation State Park.

A draft of the county’s agreement with the Sons of Confederate Veterans had initially required that the monument be made available for public viewing “by any individuals or groups who wish to do so for whatever reason, subject only to reasonable restrictions on times of visitation.”

But the contract Armistead ultimately signed on Dec. 30, 2020, reworded that provision to allow visitation only by “individuals or small groups who wish to do so for respectful historic memorial purposes.” The signed contract also permits the Sons of Confederate Veterans to deny permission for the monument to be used “in a manner that would be unreasonably divisive to county citizens.”

“The amended language was requested by the new owners and was agreed to by the County as part of the negotiations concerning the removal of the monument,” said Surry County Administrator Melissa Rollins.

The Surry monument is “at this time not open to any public for any reason whatsoever” and “no photographs at all are in anyway to be considered acceptable,” Armistead wrote via email in response to Lyttle’s visitation request.

Speaking to The Smithfield Times by phone on Jan. 3, Armistead did not elaborate on what visits the Sons of Confederate Veterans intends to permit or deny, and reiterated that the monument was “not available right now” for viewing.

According to Rollins, the county’s understanding is that permission to photograph the monument was denied because it had not yet been installed at the new site.

Lyttle has also encountered some resistance when trying to photograph monuments still owned by municipalities.

“Cities aren’t forthcoming, they cite security reasons … I’ve been toying what to do with the ‘nos,’ if it’s a matter of circling back and showing them what I’ve done and trying to explain a little bit more,” Lyttle said.

Her most recent excursion was to Roanoke, where a town square was recently renamed, and its Confederate monument removed to an undisclosed location.

“They have not granted access to where it currently is,” Lyttle said.

In Florida, where she began her career as a photojournalist with the St. Petersburg Times, now known as the Tampa Bay Times, she found a Confederate monument stored in a prison maintenance yard in the state’s panhandle.

“Some are very well hidden out in fields and forests … just getting it out of the public view; others are going to Confederate graveyards,” Lyttle said.

She’d initially intended to conclude her work on the one-year anniversary of Floyd’s death, but continued when two statues of Confederate Gen. Robert E. Lee in Richmond and Charlottesville came down later that year. The bronze Charlottesville statue has been deeded to the Jefferson School African American Heritage Center, where plans are in the works to melt it down and re-cast it into new art.

Now, she doesn’t know when she’ll stop. But once she does, her photos — including the one of Isle of Wight’s monument — will become part of a nationwide exhibit.

“Ideally, the end goal is some sort of public art display,” Lyttle said.

She’s hoping to one day get out west, where Confederate monuments in Arizona, California, Nevada and the state of Washington are located — and to learn the backstory of how they came to be in areas of the country that were never part of the Confederacy.

“So far I’ve photographed 83 Confederate monuments that have come down since George Floyd’s death,” Lyttle said. “I’ve got about 40 more to get to.”