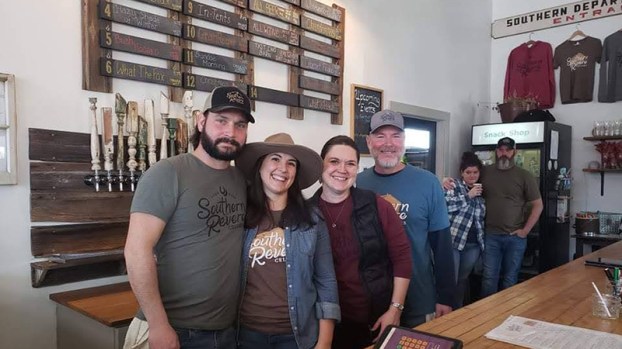 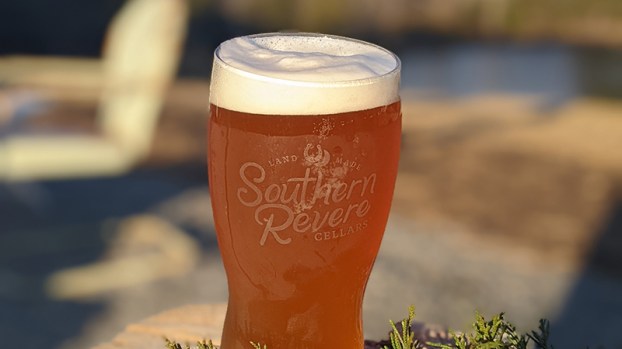 When high school sweethearts Jason and Sheridan Grime married and left Smithfield for Nashville, Tennessee, to pursue careers in the music industry, she encouraged him to apprentice at a local brewery when he wasn’t engineering sound systems at live events for touring musicians.
They’d made a point of visiting the expanding number of wineries and breweries in the city upon relocating and quickly became craft beer enthusiasts. Six months later, Jason had risen through the ranks to head brewer – his mechanical skills and creativity lending themselves to more than just music.
Now, they’re back in Virginia pursuing their latest dream as co-owners of Southern Revere Cellars in Louisa County.
Sheridan is the daughter of former Smithfield Mayor David Hare and Judy Winslow, director of Isle of Wight County’s tourism department. Jason and his parents had moved to Carrollton for work when he was a teenager, and enrolled him in Isle of Wight Academy, where he and Sheridan met and bonded playing music together. Jason’s parents then moved to Chesterfield when he and Sheridan moved to Tennessee.
As Sheridan tells the story, she and Jason had been visiting his parents in Chesterfield when his mother, Brenda, hatched a plan for her retirement that would have the added bonus of luring Jason closer to home. In the midst of their holiday tradition of sharing wines and craft beers, she suggested the two families combine their finances to purchase a vineyard.
After thinking about it over that night, Jason and Sheridan decided the next day they were in. A few months later, Brenda’s husband, Paul, was driving around one day in 2018 when he spotted land for sale a few miles off Interstate 64 between Richmond and Charlottesville. It’s the property Southern Revere now calls home.
Since then, they’ve recruited Jason’s sister, Paula Spencer, and her husband, Dave, as well as Jason’s brother, Chris, who’s begun constructing a food truck called “From the Farm,” which will offer a farm-to-table smoked meat menu.
Southern Revere’s name is a nod to Louisa County’s colonial history, and its location on East Jack Jouett Road. Jack Jouett, Sheridan explained, was a Revolutionary War folk hero who made a daring 40-mile dash on horseback to then-Virginia Gov. Thomas Jefferson’s Monticello home to sound the alarm that British forces were on their way to capture him.
“We have it on good authority that Jack Jouett, later dubbed the ‘Paul Revere of the South,’ used to frequent his father’s Louisa tavern at Cuckoo,” Sheridan said.
Jack Jouett Road, previously known as Old Mountain Road, spans the path Jack is believed to have taken, according to a map the couple obtained from Louisa’s historical society.
Southern Revere is a farm brewery and winery. To label itself as such, a winery must grow a certain portion of its own grapes used in its products. A farm brewery must grow at least one ingredient — wheat or hops — used in its products. Currently, Southern Revere is growing Chambourcin and Chardonel grapes and Cascade hops.
The family planted their first grapes in 2019 and received their first harvest in 2021. They hope to release their first wine made from the harvest later this year.
“Those grapes are in a barrel aging right now … when it’s perfect, then we’ll bottle it,” Sheridan said.
Meanwhile, they’ve crafted 12 beers and six wines available for sale – some with whimsical names.
“We did have a little fun with our sweet wine name – What A Peach,” Sheridan said.
The traditional Southern phrase is used to call someone sweet, either sincerely or sarcastically.
Another wine, this one a rosé, is named “You’re So Pretty” for its shade of pink.
There are a few nods to Jason’s and Sheridan’s musical careers, like their “Hazy Shade of Winter” IPA, named for the Simon & Garfunkel classic. Then there’s the “Grain Reaper,” a Belgian dark strong with a higher alcohol content.
“The goal was to create a space to bring people together over finely crafted beverages, whether they enjoy beer or wine, just like they did at the holidays … you get a sense of place and an appreciation of the hard work and agriculture that goes into making these types of small batch ‘land made’ beverages,” Sheridan said.