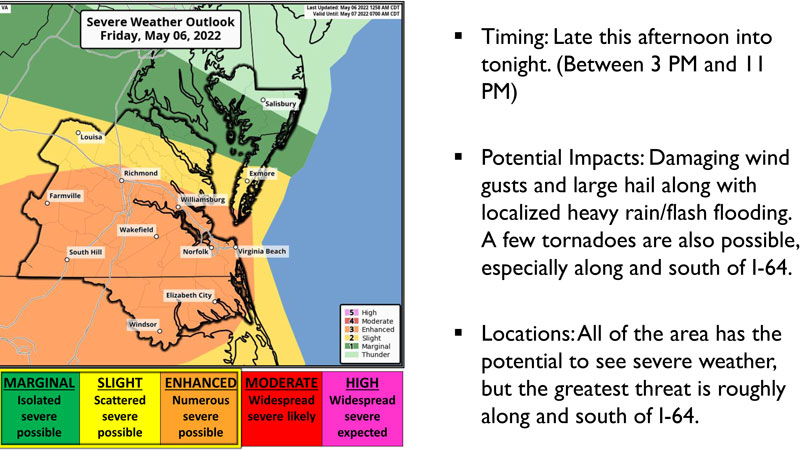 A National Weather Service forecast shows the area under an "enhanced" risk of severe weather May 6. Courtesy | NWS

Update: A severe thunderstorm warning is in effect through 5:30 p.m. for Isle of Wight, Southampton and Surry counties and the city of Suffolk.

A severe thunderstorm was located over Como, North Carolina, moving north at 40 miles per hour.

The National Weather Service is urging residents to expect damage to trees and power lines, and to move to an interior room on the lowest floor of a building.

A tornado watch remains in effect through 10 p.m. tonight for Isle of Wight, Southampton and Surry counties and the city of Suffolk.

The National Weather Service had earlier issued a hazardous weather outlook for the area, warning a warm front will lift north across the region, allowing for strong to severe thunderstorms to develop late this afternoon into tonight.

Heavy rain and thunderstorms are expected between 3 p.m. and 11 p.m. and could produce large hail and damaging winds.

This weekend, a large storm system will stall off the Mid-Atlantic coast and produce a prolonged period of onshore north to northeast winds. This will bring a threat for high surf, beach erosion, and coastal flooding late in the weekend into early next week.

Does Green Dragon Kratom Help You Stay Motivated During…