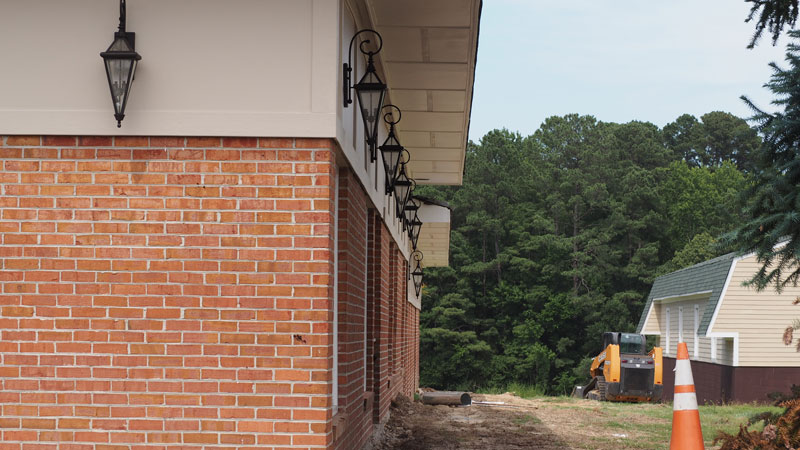 Renovation of one of the former James River Christian Academy's classroom buildings into a daycare is in progress. Behind the building to the right is the circa-1980 gym, which is proposed for conversion into a private sports club. Stephen Faleski | The Smithfield Times

Isle of Wight County’s Planning Commission has signed off on a proposal to give the former James River Christian Academy gymnasium a new lease on life.

Anthony Landes and Derek Joyner have applied for a conditional use permit to convert the 6,300-square-foot, circa-1980 building and adjacent outdoor athletic field into a private sports club that would offer off-season baseball, softball and soccer training, as well as gymnastics lessons.

With the Planning Commission’s unanimous favorable recommendation on record, the matter will head to Isle of Wight County supervisors for a July 21 public hearing and possible final vote.

Per the Planning Commission’s recommended conditions for approval, the club would be limited to 100 members, and a maximum of 25 participants on site at a time. The restriction, according to county planning staff, is necessary to meet parking requirements using the eight spaces available to them.

According to Landes’ and Joyner’s application, the club would operate Monday through Friday from 5:30 to 9 p.m. and on Saturday from 9 a.m. to 1 p.m. by appointment only.

James River Christian Academy operated from the 1970s through its closure in 2007. The Smithfield Sports Complex, as the gymnasium would be named, is the second proposal for reusing the 25-acre campus that Isle of Wight County has entertained in the past 18 months.

In October, Isle of Wight’s Board of Supervisors approved a proposal by property owner Vincent Carollo and teacher Jamie Mintz to convert one of the two 9,240-square-foot classroom buildings into a day-care center. Renovation of the classroom building is in progress.