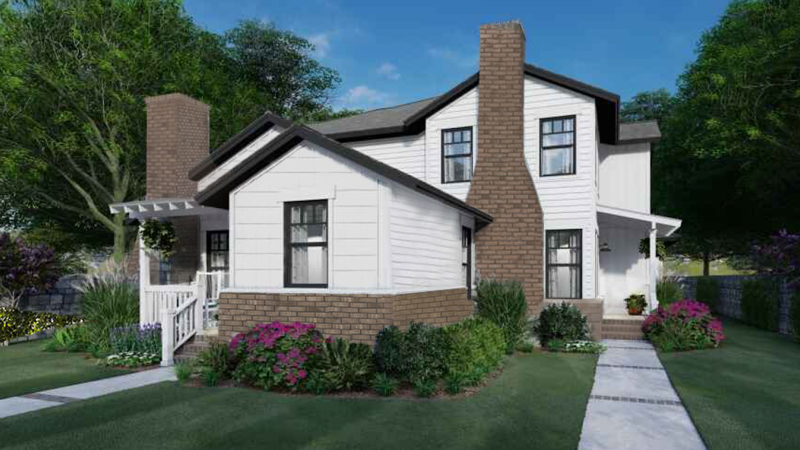 The Smithfield Town Council has approved a “zero lot” permit for the “Luter Acres” development, which will consist of four single-family homes and four duplex units. Pictured in this October 2021 rendering are two of the duplex units. Photo courtesy of Town of Smithfield

The term, according to Community Development and Planning Director Tammie Clary, refers to dwellings in the downtown neighborhood residential district that do not meet the yard requirements specified in the town’s zoning ordinance.

Luter proposes to construct four duplexes and four single-family homes on the site and to extend Clay Street to connect with James Street. The project also entails creating a 13-space parking lot for use by the adjacent Veterans of Foreign Wars post.

Luter had requested a special use permit for the proposed “zero lot” units. According to Town Attorney William Riddick III, the permit allows the duplexes to share a wall but be recorded as two separate units.

Prior to the vote, the Town Council held a public hearing on the matter, and it drew one speaker: Bob Hines of Washington Street.

Hines asked whether town approval of Luter’s requested permit was proper given that Luter did not yet own the land in question.

“People do it all the time,” Riddick replied, noting “most large tracts of land are purchased on a contract contingency that requires plans to be approved before they buy it.”

The Town Council voted last year to sell the land to Luter’s holding company, LSMP LLC. According to Riddick, that sale is contingent on the parcel being subdivided to allow the town to retain ownership of the two existing buildings on the site, one of which the town leases to The Children’s Center and the other to the Veterans of Foreign Wars.

The Town Council’s approval vote was unanimous, with Mayor Carter Williams having abstained and left the council chamber during the discussion. Williams had previously abstained from last year’s vote to approve the duplexes, citing his friendship with Luter and his son, Joseph W. Luter IV.