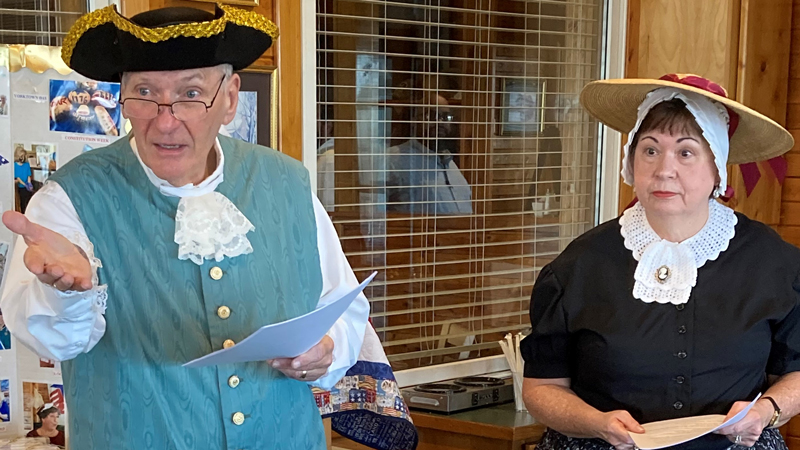 Dolley and James Madison, portrayed by Smithfield’s Linda and Tom Conley, made a special appearance before a meeting of the Col. William Allen Chapter of the Daughters of the American Revolution last week at Smithfield Station. They are expected to appear again on Constitution Day, Saturday, Sept. 17, at 4 p.m. on the steps of the 1750 courthouse in Downtown Smithfield. Madison is regarded as the father of the U.S. Constitution. (Submitted photo)

The Col. William Allen Chapter of the Daughters of the American Revolution has a number of activities planned to observe Constitution Week.

DAR national headquarters covers an entire block in the center of Washington, D.C., between C and D streets and 14th and 15th. The address is 1776 D Street and the building is open to the public for tours.

In 1955, the Daughters of the American Revolution petitioned Congress to dedicate Sept. 17-23 of each year to the commemoration of Constitution Week. Congress adopted the resolution and on Aug. 2, 1956, President Dwight D. Eisenhower signed Public Law #915.

“We celebrate this week to encourage the study of the historical events that led to the framing of the Constitution and signing on September 17, 1787, 235 years ago; to remind the public that the Constitution is the basis of Americans’ great heritage and foundation for its way of life; and to emphasize each citizen’s responsibility to protect, defend and preserve this most important document,” Newman said.

Each year, the Colonel William Allen Chapter of DAR strives to promote, educate and participate in Constitution Week. This year, that includes:

“When prospective members take the oath to become “Daughters,” they promise to uphold the Constitution,” Newman said. “We hope you will too.”