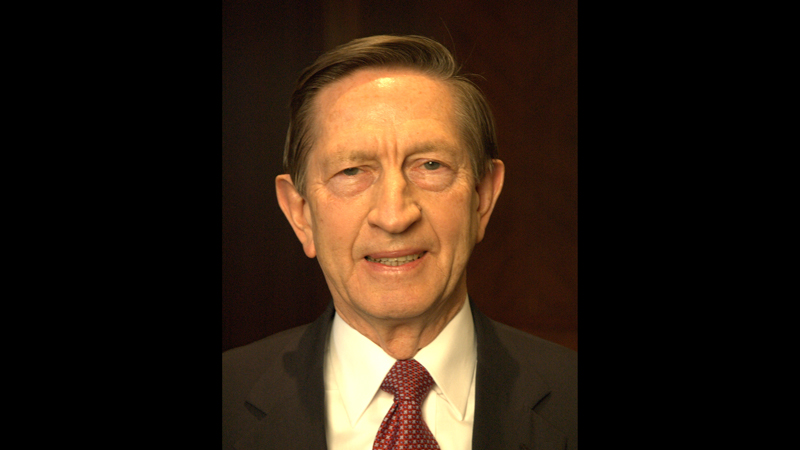 Barlow — “Billy K.” to his friends — was born March 13, 1936, on Isle of Wight County’s Oak Crest Farm, according to his obituary. He graduated from the old Smithfield High School on James Street, where he was captain of the school’s football, basketball and baseball teams. The building now houses the town’s library, YMCA and a branch of Paul D. Camp Community College.

After graduating, he attended Virginia Tech, where he served as regimental commander of the Corps of Cadets and 1958 class president, earning a degree in agricultural economics. He later earned his law degree from the University of Virginia in 1965.

“We grew up in the community,” said Ivy Hill Cemetery President William “Peyton” Barlow, a distant relative and lifelong friend. “He went to Tech. I went to Tech. We were all Hokies.”

Peyton remembers his childhood friend-turned-statesman as a “strong church person,” noting Billy had been involved throughout his life with Smithfield Baptist Church.

According to his obituary, Barlow served as a Sunday School teacher, trustee, moderator and as chair of the church’s Board of Deacons.

In 1991, Barlow won his first term in the House of Delegates, representing Isle of Wight as a Democrat in the 64th District seat. He was reelected to 10 consecutive two-year terms before losing the seat to Republican Richard “Rick” Morris, who held the seat through 2017. Morris was succeeded by Republican Del. Emily Brewer, who was most recently reelected in 2021.

Barlow, in 2010, sponsored an early version of legislation the General Assembly ultimately passed in 2020, intending to create a bipartisan “redistricting commission” for the purpose of redrawing Virginia’s legislative boundaries following each census.

Barlow’s bill, which had proposed tapping retired judges or state Supreme Court justices as commission members, ended up stalling in the House Committee on Privileges and Elections, according to Virginia’s online legislative information system.

Ten years later, the General Assembly created a 16-member redistricting commission composed of eight legislators and eight non-legislators from each major political party. The commission, though intended to take politics out of the redistricting process, ended up deadlocking along party lines in 2021 and kicking the task to two “special masters” appointed by Virginia’s Supreme Court.

During his tenure in the House, he served alongside the late state Sen. Richard Holland Sr. of Windsor, father of former Farmers Bank Chairman Richard “Dick” Holland Jr.

“Mr. Barlow was the kindest, most considerate legislator I knew,” Holland Jr. said. “Party did not matter; he cared about everyone.”

“He was a wonderful person and public servant,” added Joe Puglisi, chairman of the Isle of Wight County Democratic Party chapter. “One of his main areas of focus was improving educational resources for the children of our area.”

“He loved his community,” said Smithfield attorney William H. Riddick III, who was partners with Barlow in the firm Barlow & Riddick P.C. “He was a great lawyer and impeccably and very well respected. … I’ll miss him terribly.”

Riddick, the more conservative of the two, acknowledged he and Barlow “weren’t on the same page politically,” but it “never interfered with our business relationship.”

“Everyone who has different political opinions should get along as well as we did,” Riddick said.

According to his obituary, Barlow was a founding member of the Citizens for Better Public Schools in Isle of Wight County, a local group organized in the early 1970s to build support for integrated public schools. Isle of Wight County Schools had been operating under a precursor to integration known as “freedom of choice” until a lawsuit by the parents of 84 Black children forced the school division to fully integrate in the 1969-70 school year.

A graveside service is planned for Sept. 24 at 1 p.m. at Ivy Hill Cemetery, followed by a 2 p.m. reception at Smithfield Baptist Church.