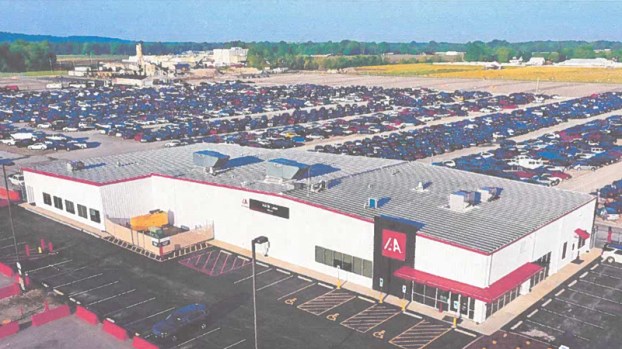 Insurance Auto Auctions shared this photo of its St. Louis, Missouri facility as an example of what’s proposed for a 75-acre site in Isle of Wight County’s industrial park along Benn’s Church Boulevard. (submitted photo) 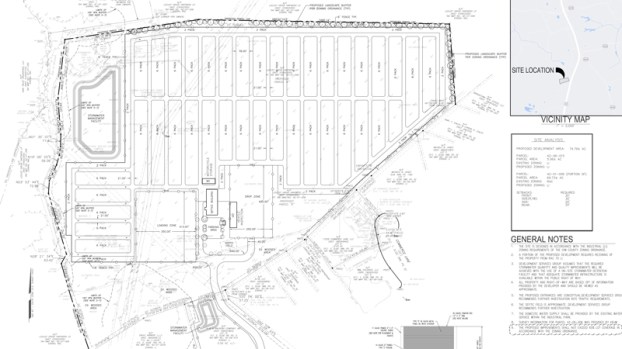 The submitted site plan for the proposed Isle of Wight County Insurance Auto Auctions facility shows a landscaped buffer to shield the site from view of Benn's Church Boulevard.

A nationwide automotive auction business eyeing the Isle of Wight Industrial Park for its seventh Virginia branch has received a unanimous favorable recommendation from the county’s Planning Commission.

Advanced Construction Development LLC has applied for a zoning amendment to create a “scrap and salvage service” on two parcels totaling 75 acres. The application is on behalf of Insurance Auto Auctions, an internet-based auctioneer of vehicles involved in collisions, floods or repossessions. IAA is proposing to store roughly 3,500 vehicles on consignment from insurers at the proposed site, accessible from Benns Church Boulevard via IWIP Road.

The site would consist of a single-story metal building, concrete parking lot for employees and customers picking up their purchases, and outdoor vehicle storage paved with asphalt millings. According to William Dytrych, manager of real estate development for IAA, the auctions would be exclusively online, with many bidders originating from outside the United States.

The Planning Commission voted on the proposal Sept. 27. The board previously discussed IAA’s proposal in August but had requested additional information from the applicants on their fire prevention strategies, citing how close together the cars will be stored and the added challenges of extinguishing electric-vehicle fires.

According to reporting by The Hill, firefighters used 40 times the amount of water normally needed to contain gasoline-powered vehicle fires when a Tesla Model X electric car powered by lithium battery cells crashed and burst into flames in Austin, Texas, in 2021. To reduce the likelihood of a damaged electric vehicle battery sparking a multi-vehicle fire, any electric cars stored on site would be located apart from gasoline-powered vehicles and nearer to the site’s stormwater pond, the applicants said. The site would add a third “dry hydrant” to two already serving other parcels in the industrial park.

Dry hydrants, according to Virginia’s Department of Forestry, use non-pressurized pipe systems to draft flow from an adjacent body of water.

The Planning Commission’s recommendation for approval came despite the objection of Chris Waltz, who said during the meeting’s public comment period that he objected to a salvage yard next to his business and three miles from the site of Riverside Health Systems’ proposed 50-bed hospital at Benn’s Church and Brewer’s Neck boulevards.

Isle of Wight’s supervisors, who have the final say over whether the requested zoning amendment is approved, are set to consider the matter on Oct. 20.