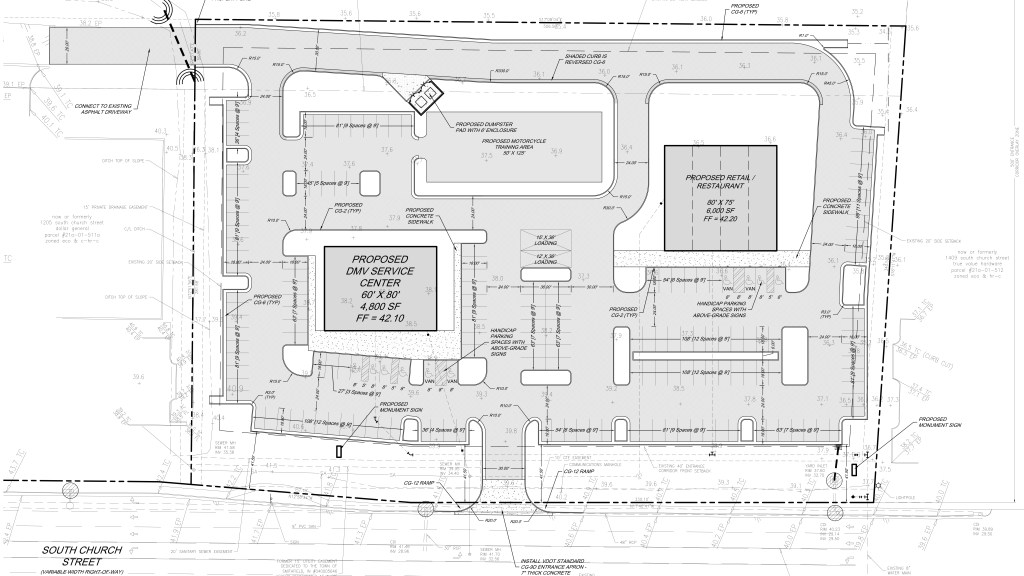 Smithfield’s Town Council has given its approval for a new Virginia Department of Motor Vehicles customer service center to have more than three times the maximum number of parking spaces allowed under the town’s zoning ordinance.

Warren Sachs, owner of Virginia Beach-based KLS battery Park Development Group LLC, had applied for a special use permit that would allow for up to 108 parking spaces dedicated to the new office, which the state would lease from him. The town’s zoning ordinance specifies one space per 150 square feet of gross floor area, or a maximum of 32 spaces for the proposed 4,800-square-foot South Church Street office.

According to DMV spokeswoman Jessica Cowardin, the initial lease between Virginia’s Department of General Services and Sachs is for 10 years with rent set at $115,200 annually, paid in monthly installments.

According to Sachs, the DMV had initially requested 140 parking spaces to accommodate the anticipated number of regional customers looking to obtain or renew their driver’s licenses or conduct other DMV business, but he was able to negotiate the number down to the requested 108.

The council voted unanimously on Oct. 5 to grant Sachs’ requested waiver, conditioned on his obtaining an approved site plan.

The new DMV office would be located on a 3.8-acre parcel adjacent to the South Church Street Dollar General. The DMV had initially anticipated breaking ground last fall and opening the facility by mid-2022. As of May, the DMV acknowledged the project had yet to break ground but maintained the new facility would still be open by the end of the year. Now, according to DMV spokeswoman Jessica Cowardin, the state agency hopes to have the new facility open sometime in 2023.

Sachs is proposing to construct a 6,000-square-foot building adjacent to the proposed DMV office on the same parcel to house a yet-to-be-named restaurant and retail store.

The new DMV office will replace the shuttered DMV center further down and on the opposite side of South Church Street. The shuttered DMV building is now home to the Office Express Plus shipping and printing business.

The old facility shuttered on March 18, 2020, along with every other DMV office in the state due to the COVID-19 pandemic, but remained closed even when others reopened – according to the DMV, due to its small lobby and lack of a public bathroom.

Currently, the closest DMV centers to Smithfield offering in-person services are in Hampton, Portsmouth and Suffolk. DMV Connect, which Cowardin described as the agency’s mobile “office in a suitcase,” also makes regularly scheduled visits to the Smithfield area, she said.