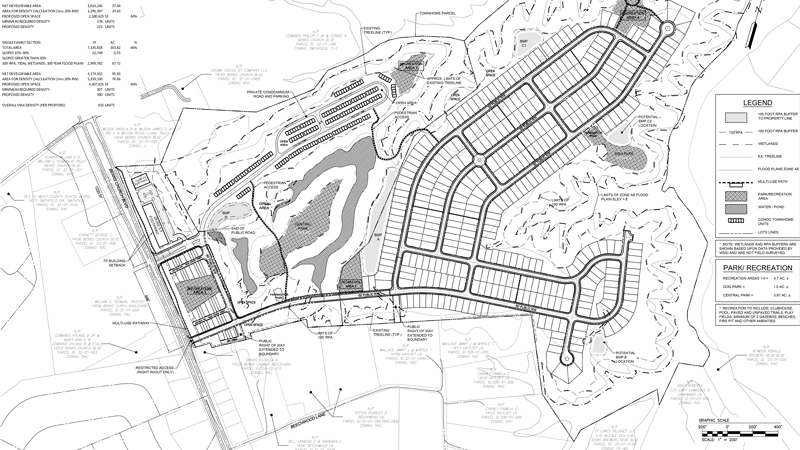 A July 2022 master plan shows 615 homes proposed for the Sweetgrass development outside Smithfield, including townhouses and age-restricted detached dwellings. (Image courtesy of Isle of Wight County)

A Northern Virginia developer has slightly scaled back plans for a new community just outside the town limits of Smithfield but is still proposing more than 600 houses.

NVR Inc., the Reston-headquartered parent company of Ryan Homes, submitted plans to Isle of Wight County in 2019 for a 685-home development on the roughly 250-acre Yeoman Farm next to the Sherwin Williams store on Benns Church Boulevard. NVR has submitted four revisions of the proposal over the past three years, most recently in July.

The 2022 master plan calls for 615 homes, down from the original 685, 390 of which would be age-restricted, detached dwellings. The remaining 225 units would be townhouses and would not be age-restricted. The plans also call for up to 38,000 square feet of commercial space that would front along Benns Church Boulevard.

The new plan was still under review by county staff as of November, according to Assistant County Administrator Don Robertson. To date, none of the Sweetgrass iterations have gone to the county’s Planning Commission or Board of Supervisors for formal approval. No date has been set for the current master plan to go before either body, Robertson said.

The Smithfield Times requested and obtained the 2022 plans from Robertson following a School Board discussion in November about changing the attendance zones for Carrollton Elementary and Hardy Elementary to make room for an influx of new enrollments from Sweetgrass and other pending developments in the county’s northern end.

Access to Sweetgrass would be via Benns Church Boulevard at two points: one leading to and from the commercial spaces and townhouses, and the other facilitating access to and from the age-restricted houses.

The 2022 plans call for the creation of two intersections with Benns Church Boulevard to facilitate access to and from Sweetgrass. The development would also have a bicycle and pedestrian path that would span its frontage along Benns Church Boulevard and connect the age-restricted area with the townhouses across a central park.

Under the School Board’s proposed rezoning plan, which would take effect July 1, students living in Sweetgrass, the 812-home Mallory Pointe development set to break ground next year along Battery Park Road, or the existing Wellington Estates and Gatling Pointe neighborhoods would attend Hardy rather than Carrollton. Carrollton, which is currently at 93% of its 720-student capacity, would be brought down to 82% under the rezoning, according to school officials.

Even if the current Sweetgrass iteration makes its way to the Planning Commission and Board of Supervisors in the near future, it could be years before the development breaks ground. The 776-home Benn’s Grant development, also located on Benns Church Boulevard and built by East West Communities, went through a number of changes over seven years before being approved in 2009 and another six years before breaking ground, according to past reporting by the Times. Benn’s Grant is still under construction.

Editor’s note: A previous version of this story incorrectly listed East West Communities as an affiliate of Ryan Homes. East West is the developer of the residential portion of Benn’s Grant. Ryan then bought developed lots from East West.