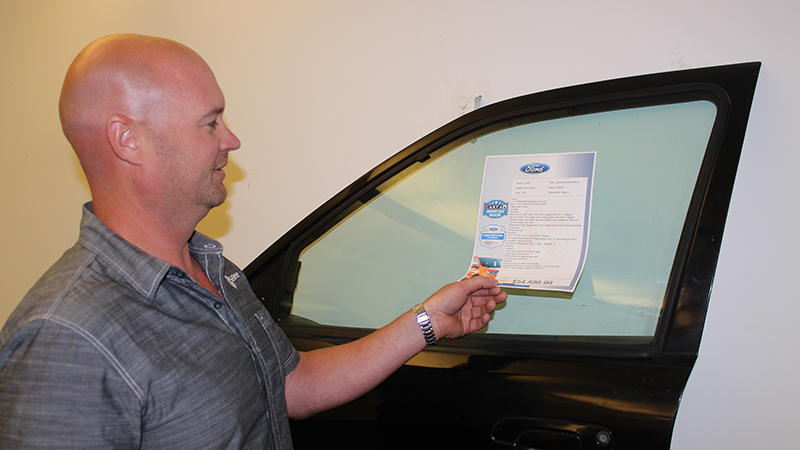 Josh Tawes, CEO of SaleSleeve, demonstrates the use of one of the company’s products.

A local self-described serial entrepreneur turned an idea on the beach into a new business.

SaleSleeve Elite is a weatherproof, printable label that’s adhesive free. It’s designed for the automotive industry, which in 2019, sold about 40 million new and used cars.

New vehicles are required to have a federally-mandated label, called the Monroney sticker, which displays the car’s equipment and pricing. Used cars sold by businesses to the public are required to display a Buyer’s Guide sticker with similar information. Failure to properly display the labels on new or used cars can result in steep fines.

“When the idea came about, I was actually on vacation in Nags Head with a guy who’s a childhood friend that actually owns a car dealership,” said SaleSleeve Chief Executive Officer Josh Tawes. “When the idea came up, I kind of turned around and asked him ‘Is this really a problem?’ And he said ‘It’s a problem that we’ve dealt with for 20 years.’”

Standard stickers are problematic. They’re not waterproof, and once affixed, they’re almost impossible to remove with destroying, rendering it unusable and illegible. Worst of all, they leave residue that wastes time and money to clean.

The beach conversation piqued Tawes’ interest when he realized “that there was a niche we could get into in the market that nobody had been able to fill.”

Introduced a few weeks ago, the Elite is the company’s second major product. The original SaleSleeve allowed auto dealers to move the stickers from inside vehicles to the outside. This is important in areas that get lots of sun, like Texas and Florida, where most cars come standard with tinted windows, which make the stickers hard to read.

SaleSleeve introduced its new product at the National Automobile Dealers Association show in February and they began selling it in March, right as the COVID-19 pandemic forced changes to all aspects of daily life.

In an unexpected twist, however, the new product made managing vehicles on dealer lots easier.

That’s because many dealers contract with independent companies for services such as inventory management, photography and applying the mandatory window stickers. Because the new labels stick to the outside of windows, even in wet conditions, they don’t fade, and they can be run through a laser or inkjet printer, contracted workers don’t need access to dealership buildings or vehicle keys.

“We tried to make it as easy as possible for any of the lot service companies, as well as the do-it-yourself dealerships that don’t use the lot service companies. So we got rid of all of the windfalls of the current products that were on the market and we were able to develop the new product and actually sell it for the same amount, actually a penny cheaper than what the current market products are,” Tawes said.

Speaking last week at the company’s offices and warehouse on Monette Parkway, Tawes said a shipment of 500,000 pieces was due in a few days, “and we anticipate those will probably be gone in a couple of weeks.” According to company promotional material, the MSRP for the window stickers varies depending on size and starts at 95 cents.

The original SaleSleeve is patented; a patent is pending for the Elite product.

“We have managed to build and design and get these patents awarded to ourselves 100% internally within the company,” said Brown, who has education and professional experience in manufacturing, as well as developing ideas for the marketplace. “Everyone that’s involved is someone that had a say so in how the product was developed.”

Tawes said the auto industry is “the tip of the iceberg” since a weatherproof, printable label that doesn’t leave adhesive residue is a product that has applications in many markets — marine, industrial equipment or any small business that could use a printed, weatherproof, easily removed reusable label.

The company employs nine; six are owners who each hold a percentage of the business.

Tawes said doing business in Smithfield makes good logistical sense. Whether products arrive from overseas on a ship or via air freight, with so many nearby marine terminals and airports in and around Hampton Roads, it’s easy to get products in the supply chain. “You’re very easily and cost effectively able to ship from Virginia all up and down the East Coast as well as to the central portion of the U.S.,” Tawes said. “It’s a good, centralized location.”

Tawes has started or been part of a range of businesses — everything from renting and flipping properties to owning a limousine company. “Anything I see that I think may be something that is the next big thing or the next big hit, I try to get involved in,” he said.