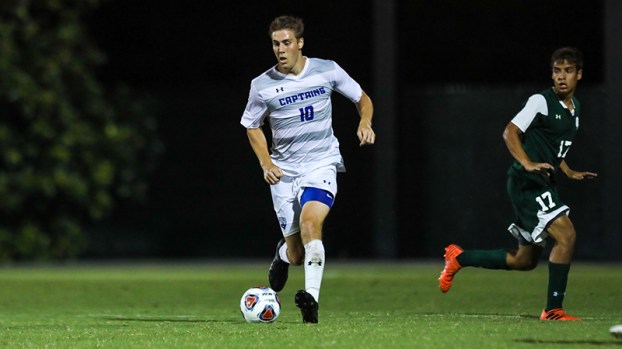 Smithfield High School graduate Davis Pillow has had great success on the Christopher Newport University men's soccer team, but he doesn't plan to play soccer at the next level after his senior year is over. (Submitted Photo)

Special to The Smithfield Times

For three years, Davis Pillow has been a valuable player for the Christopher Newport University men’s soccer team.

As the Smithfield High School graduate enters his final year of eligibility, he is expected to be an important figure again.

Christopher Newport Head Coach Justin Chezem said he has known Pillow since he was 8 or 9  and that he committed to the program when he was a high school junior. “He’s a driven young man,” the coach said.

The son of Julie and Steve Pillow, the 6-foot-2 senior has been a starting defender since his freshman season, when he played all 18 games and led the freshmen with 17 starts. He played left outside back and finished fifth in scoring on the squad, with five goals and three assists.

“I came in confident and excited to play,” he said. “I was ready to earn my time. I got lucky enough to play my freshman year. When I did get the chance to play, I performed well.”

All his goals were on headers from corner kicks or crosses into the box, he said. “That’s kind of a cool stat,” he said.

He played mostly left outside back and some right outside back his sophomore season. Last year, he played whichever defender position necessary because, he said, the team had an abundance of injuries. “He’s going to play anywhere on the back where we need him,” Chezem said.

Pillow was one of three Captains to start all 21 games in 2019, and he finished with two goals and one assist. The team earned a berth to the NCAA Division III soccer championship and was host to the first and second rounds of the tournament. “It’s just an unforgettable experience,” he said about his first championship.

Also special is that the season was his most decorated. He was named to the all-Capital Athletic Conference first team and the Virginia Sports Information Directors all-state second team. “That was really cool for me to be recognized. I wasn’t a huge goal scorer,” said Pillow, a 2019 selection to the United Soccer Coaches Division III Scholar All-South Region first team.

The coach said Pillow is assigned to mark the opponent’s best player because of his ability to contain scorers, even preventing them from taking shots. “He is the best one-on-one defender,” Chezem said. “He’s tenacious. He’s extremely athletic. He can run with anyone.”

And the rare time an opponent gets past him, the coach said, he recovers so quickly. “You can’t just beat him once,” he said. “If there’s a ball to be won, he’s going to win it.”

From his freshman season, Pillow learned how physical the college game is and worked on improving his strength to better handle the physicality. “I’ve been blessed to always be athletic. I’m tall and a big guy,” he said. “I’ve gotten much more physical and have much more muscle.”

In addition, he worked to improve kicking long balls, which he said was a weakness. “It’s one of the important aspects, not only to clear the ball and also hit the guy (teammate) on the long ball,” he said.

He is on track to graduate in May and does not plan to play soccer at the next level. “When these four years are done, I’ll be very proud and happy of what I’ve been able to accomplish in my soccer career,” he said.

Isle of Wight County has scheduled a public hearing on the fate of its Confederate monument for Sept. 3 at... read more