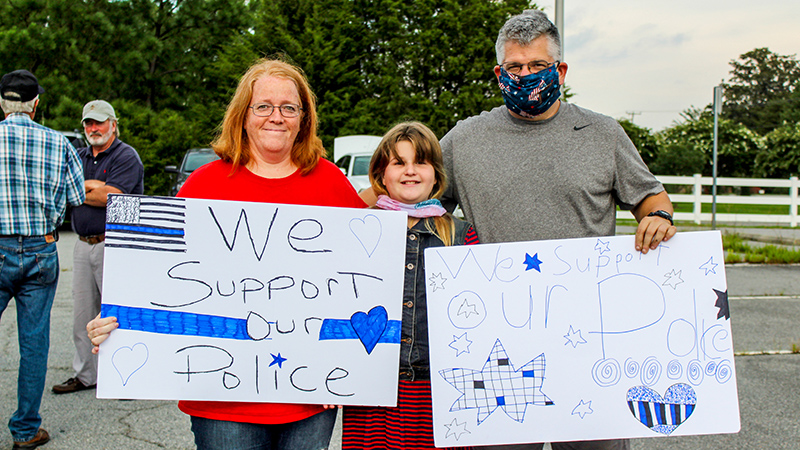 Tami, Chelsea and Patrick Connolly created their own posters to show their support at the rally in Smithfield.

The call to show support for law enforcement, particularly in Isle of Wight County, attracted about 80-plus people to the Back the Blue appreciation rally on Aug. 8. This took place in spite of sometimes threatening skies over a parking lot at the corner of routes 10 and 258 in Smithfield.

Albert Burckard of the Carrollton Civic League, one of three event organizers, said he got the idea a couple of weeks after learning of similar events in Portsmouth and Virginia Beach.

Looking over the audience, many of whom wearing masks, he added, “I want to declare right now this event an absolute success!”

Volpe Boykin of the Southern and Central Isle of Wight Citizens’ Group read a letter of commendation from Harry Twiford of the Virginia Fraternal Order of Police.

County supervisor Dick Grice told a story about the time he once got a traffic ticket, then emphasized he had no hard feelings about the matter. The officers, he added, “were doing their job.”

Dotted here and there were people holding up signs of support. Patrick and Tami Connolly brought their daughter, Chelsea, who had written in blue marker “We Support our Police.”

Dr. Ramona Austin, of Smithfield, brought her poster, “Back the Blue.”

Daren and Christine Wingard came up with their son, Nate, from Windsor, and they held signs reading “We Back the Blue” and “We Love Our LEOs.”

Karen and Bryant Baumgartner also stood in solidarity with other participants. Her statement was “Defend our police. Don’t defund them.” His black-and-blue flag read “Police Lives Matter.”

Amidst the gathering, Karra Johnson of Smithfield in silent contrast held up two signs: “Black Lives Matter” and “I Can’t Breathe!” The first is in reference to the Black Lives Matter Movement, which has experienced a resurgence since the death of George Floyd. On May 25, he was taken into custody by police officers in Minneapolis, Minn. A video taken of the incident shows one policeman kneeling on Floyd’s neck, who called out several times, “I can’t breathe!” He later died, and violent riots erupted in many cities throughout the country. Protests that have taken place in Western Tidewater have been peaceful ones.

Smithfield Mayor T. Carter Williams told the story of people crossing the ocean in colonial days. Their supplies included a barrel of apples, and one day a rotten one was found among the good ones.

“Would you throw out a whole barrel,” asked Williams. “No!”

Then comparing law enforcement officers to the produce, he added, “We have a whole lot of good apples. You don’t condemn the whole barrel. Keep a perspective where it ought to be.”

Boykin said another such rally will occur from 5 to 7 p.m. at the Capitol District in Richmond on Aug. 16. For details, email cami@brewerforva.com.

To conclude, Burckard then asked seven or eight law enforcement officers to come forward and be recognized. They were rewarded with several minutes of applause and cheers.