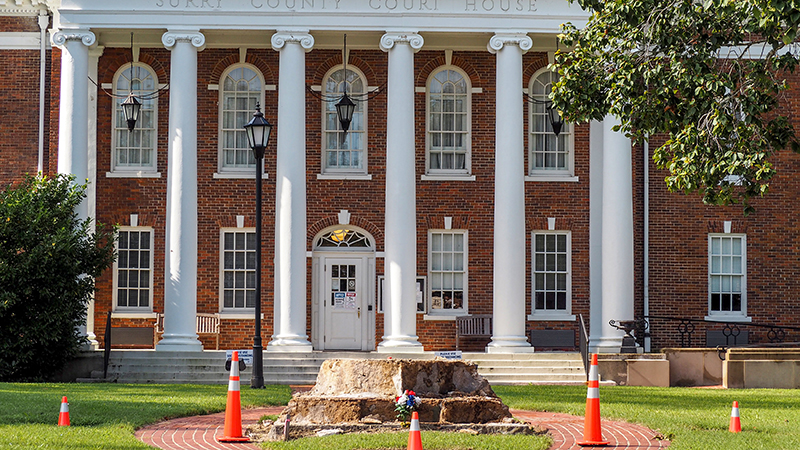 Surry County’s Confederate monument, which once stood at the entrance to the county courthouse, has been moved to an undisclosed location in the county, where it will be stored pending offers from museums, historical societies, other government entities or military battlefields to take it.

The Surry County Confederate monument, formerly located in front of the county’s courthouse, is gone.

The monument was removed from its spot over the weekend. According to county officials, the monument is being stored at an undisclosed location while Surry’s Board of Supervisors wait out the 30 days state law requires localities to offer their Confederate monuments slated for removal to museums, historical societies, other government entities or military battlefields.

Surry County’s Board of Supervisors had voted unanimously, with one absent, on Aug. 13 to remove the monument — but not before residents for and against removal had their say.

That evening, more than a dozen residents spoke — most in favor of removal — during a public hearing on the matter, which was held virtually in light of the COVID-19 pandemic. Changes to state law, which took effect July 1, require such a hearing before any locality can legally remove, relocate, cover or add signage contextualizing its monuments.

Paula Hannaford-Agor was among those advocating for removing the monument.

“The time frame when the statue was put up, it was a time when all across the south and certainly here in Surry County and in Virginia was rampant Jim Crow … essentially trying to rewrite the history books, actually very successfully, trying to establish white supremacy and African American subjugation for all eternity,” Agor said.

She then told the story of a lynching that occurred in 1887 outside the courthouse where the statue now stands. An African American man named Ruben Cole, she said, had been accused of raping a married white woman. He had been arraigned in District Court but had requested a jury trial.

“Based on the contemporaneous newspaper accounts of that time, a white mob of about 50 people were terribly concerned that he would be acquitted, and so the night before, on July 26, 1887, they stormed the local jail, dragged him out of jail and hung him by his neck just outside on the courthouse grounds,” she said. “He was 29 years old, he was married, he had two children. I’ve been trying to do some additional research. That particular injustice, followed by a statue saying that there will be no justice for African Americans leads me to say that taking down that statue now is absolutely necessary. The courthouse has to be a place where there is equal justice under the law … it needs to come down as a first step, just the first, but it needs to come down.”

Howell Godfrey of Claremont used the three minutes he was allotted to read a passage from Confederate Vice President Alexander Stephens’ Cornerstone Speech, in which Stephens stated that the cornerstone of the Confederacy’s founding “rests upon the great truth, that the negro is not equal to the white man; that slavery — subordination to the superior race — is his natural and normal condition.”

“It was with this pseudoscience that he and others took up arms against America … these people were not heroes and should not be remembered as such,” Godfrey said. “They were traitorous and callous in their actions. There is no difference between the Confederacy and ISIS and other oppressive regimes throughout history … The Confederacy is not southern heritage. The South has so much more to offer than a legacy of losing, a legacy of unequal opportunity or a legacy of brothers turning on brothers.”

Trevor Benson, however, called upon the Board to be “constructive rather than destructive” by not only keeping the monument but also erecting additional monuments to Surry’s history. He didn’t feel the monument needed any additional signage contextualizing it.

“The monument’s true context is already inscribed on the monument … that’s a monument to the fallen soldiers of Surry’s two Civil War regiments that took part in the bloodiest war in American history,” Benson said. “Removal of the monument or attempting to revise history to make it something other than what it actually is would be a deep offense to the many families of Surry whose fallen family members the monument stands in memory of.”

“I wish I could somehow convince the people who wish to destroy any remembrance of the Confederacy and any image or statue honoring our ancestors that fought in it that you cannot erase history,” added Helen Engleston. “The Civil War and slavery are part of America’s history. I deeply regret that there are those of you who find so much pain and hatred in those memories … neither you nor I was ever a slave or owned a slave … celebrate your people’s accomplishments, stop criticizing the country and society that has given you the opportunities and the successes you have. You and your people have risen from slavery to the highest office in our country, focus on that.”

The monument depicts a Confederate soldier standing atop a stone base engraved with the Confederate battle flag and the inscription “Our heroes 1861-1865, to the Confederate soldiers of Surry County, that we through life may not forget to love the thin gray line, erected by the Confederate Memorial Association of Surry County A.D. 1909.” Several years ago, stacks of Civil War-era cannonballs, donated by Isle of Wight County resident Albert Burckard, were added on three sides of the monument. These too have been removed and stored pending offers from museums and battlefields to take them.

Localities, however, are under no obligation to accept such offers, as the law makes clear that local governing bodies shall have sole authority to determine the final disposition of their monuments.

Surry isn’t the first to take down its monument mere days after the vote to remove it. The city of Virginia Beach, on July 25, took down its 115-year-old Confederate statue less than two days after its City Council voted unanimously to do so, according to Associated Press reports.

Surry Confederate monument to be removed