There’s a subterranean crustacean amongst us! 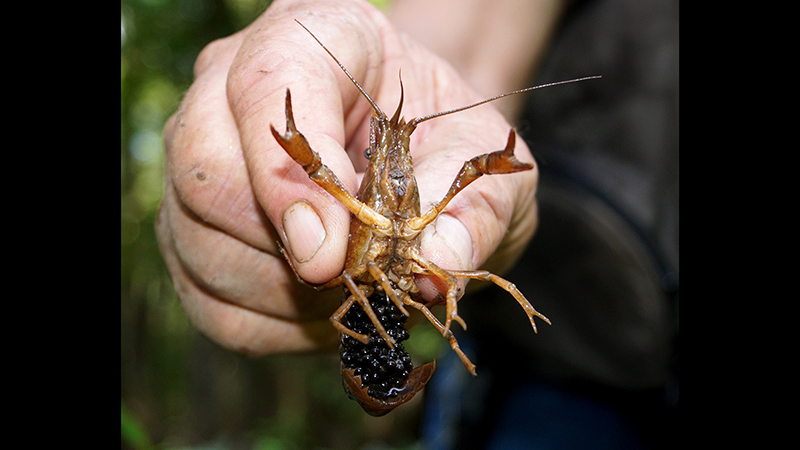 If you haven’t already guessed what the title is about, I’m talking about the crayfish, and that’s due to its burrowing habits in wet areas. And actually there’s more than that single species of crustacean living around us. We also have the sowbugs or pillbugs or as we called them as kids, roly-poly bugs. But that’s another subject for another time.

We’ve all seen those little mud chimneys along the roadside and on the sides of people’s yards. There are tunnels that lie beneath those mounds leading down to the water table. If you happen to see these, you can be certain that the water table is not far below. Crayfish breathe with gills, so therefore need that water for their survival. As these creatures are normally solitary, there will only be one animal in that burrow. And if you see several similar-sized chimneys in close proximity, they all probably connect with the same set of tunnels. The only time crayfish aren’t solitary is when they to come together for mating in the fall. Following mating, the eggs will stay attached to the female through the winter until the spring warmth, when they’ll hatch into larvae. The female can have up to 200 eggs and following hatching, those larvae will stay with the mother until around their 3rd larval stage. These young can grow up to about three-quarters of an inch in length by the fall, but since there are a number of animals that prey on them, only about 10% will survive.

The exoskeletons of crustaceans are rigid and hard and as they will not expand, the animals have to molt in order to grow, shedding that hard skin as they become larger. This molting process will continue throughout their entire life, which in the wild can be up to three years. Therefore, if you see a very large crayfish, you can be certain that it probably won’t be any older than that.

We have several species of crayfish living in our area, one of them being the Devil Crayfish (Cambarus diogenes) probably the most widespread and common one in the United States. If you encounter a crayfish, this is likely the one that you’ll see. Being nocturnal, they hunt for their food at the night, scavenging small dead animals or invertebrates and also eating aquatic worms, insects and vegetation. So if by chance you go out at night along a stream with a flashlight, you might see these guys out of their tunnels and crawling about.