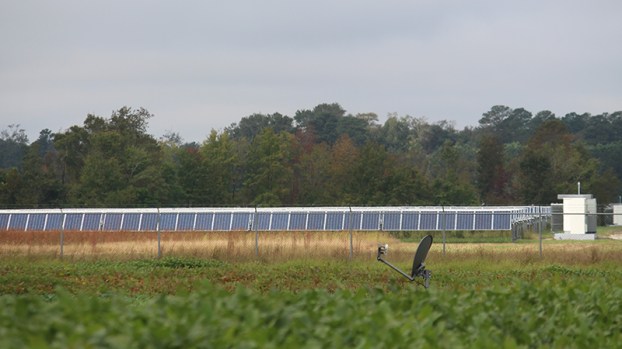 Woodland is the only operational solar farm in Isle of Wight County, but other similar projects are planned. Woodland occupies 180 acres and produces almost 20 megawatts. It includes ground-mounted single-axis tracking solar arrays and will have an expected operational life of 35 years, according to Dominion Energy. Three more solar projects are proposed in Isle of Wight.

Isle of Wight’s outlook for solar energy development is bright — and potentially lucrative for land owners.

However, that growth does come with the cost of taking land out of agricultural use and the future for the land and landowners who choose to develop solar farms on their property is uncertain beyond the 30-year anticipated lifespan of today’s solar energy projects.

“Isle of Wight County is considered a prime location for the development of solar farms due to the continued emphasis on the development of renewable energy by the state, large tracts of reasonably priced agricultural land and existing electrical distribution infrastructure,” said Amy Ring, Isle of Wight’s planning director.

Ring was one of three guests invited to provide a public update on local solar energy plans and issues at an Oct. 5 Isle of Wight Citizens Association meeting at Windsor Town Center.

Woodland includes “facilities comprised of ground-mounted single-axis tracking solar arrays, which are a reliable, proven technology and expected to have an operating life of 35 years,” according to Dominion Energy’s website. The utility company also launched two other solar energy projects at the same time in Powhatan and Louisa counties. At peak output, the three sites can power 14,000 homes.

In addition, the Cavalier solar project is under review. It’s located in northern Isle of Wight straddling the border with Surry County. About 530 acres would be in Isle of Wight. Overall, the project would produce 255 megawatts; about one-third of the energy would come from Isle of Wight.

“Farming and solar facilities like the same types of properties,” Ring said.

Isle of Wight’s current comprehensive plan, adopted in January, includes criteria for considering new solar sites. The plan’s criteria includes consideration of maximum density for future solar facilities — or in plain language, how much county farmland would be available for solar facilities.

Applicants must also submit a litany of documents and plans that details everything from the solar project’s construction project time frame, its impact on the visual character of the site, an economic analysis and an environmental and agricultural impact analysis.

Isle of Wight’s commissioner of the revenue values solar farms at a commercial rate of $15,000 per acre. Agricultural or horticultural land is valued at $1,238 per acre. However, Ring said it’s difficult at this point to make revenue projections for several reasons.

The first is that solar facilities that produce 20 megawatts or more can receive an 80% machinery and tools tax exemption on the initial and depreciated value of facilities. At solar farms that make more than 25 megawatts, the State Corporation Commission assesses facilities and equipment using a sliding scale depreciation method.

“It’s true that farmland would be coming off the rolls, as far as being utilized as farmland,” Randy Keaton, Isle of Wight’s county administrator, said at the meeting. “But at the same time, I come from a farming family in North Carolina so I’m familiar with the economics of farming right now. For example, if a landowner rented their land out for, let’s say, $100 to $150 an acre, the solar farms will pay anywhere from $600 to $1,000 an acre. So for the landowner, it is a huge economic benefit if their land is designated for a solar farm.”

It’s the same thing for a farmer, Keaton said. “If a farmer is farming his own land and is making, let’s say, a few hundred dollars an acre, they can rent out part of their land for a solar farm” and continue farming the rest. The opportunity to profit from solar is appealing but carries lots of considerations, Keaton said. “It’s a complicated issue for everyone involved.”

Until about five years ago, many utility companies pushed back against solar power, according to Steve Harmon, chief executive officer of Windsor-based Community Electric Co-op. The issue was solar’s cost. But with recent technology advancements, utilities have come around.

To that end, CEC recently built a small solar power system at its office. Harmon described it as a microgrid. The panels, in turn, are connected to a battery storage system that serves as a battery backup should the grid power fail, and it also allows the utility to reduce its peak demand electricity usage.

Gov. Northam in 2019 signed the Virginia Clean Energy Act. Among other goals, the legislation requires future energy come from 100% renewable resources like solar or wind. Energy companies may face penalties for failing to meet certain goals. Dominion Energy must be carbon-free by 2045. Another major utility, Appalachian Power, must be carbon-free by 2050, according to the law.

“We’re somewhat adhering to or trying to do our part to meet the governor’s objectives of 100% renewable by 2045,” Harmon said. “I think it’s a pipe dream personally — most of the time, politics get way ahead of the science, and this is an example of that. I know it’s a lofty goal. I’m not sure we’ll get to 100% renewable by 2045.”

More opportunities to learn about regional solar projects are coming up. The company behind the Cavalier Solar project in Isle of Wight and Surry, sPower, has planned an in-person open house for 4 to 6 p.m. Oct. 14 at Hampton Roads Winery, 6074 New Design Road, in Elberon in Surry. Masks and social distancing will be required for those who wish to attend.

Also this month, Hexagon Energy, the company behind Loblolly Solar, a 150 megawatt facility planned for west of Spring Grove in Surry, will host a digital community meeting via Zoom at 6:30 p.m. on Oct. 19. More information is available on the county’s website.