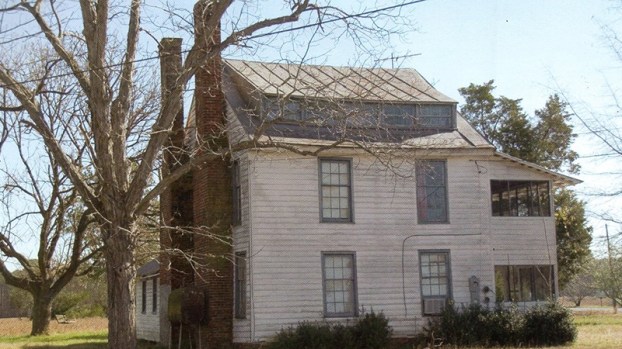 The Carroll Shop house sits at the intersection of Reynolds Drive and Norsworthy Drive. This house is a rare example of a vernacular clerestory-type dwelling — only six survive in Isle of Wight as of 2020, according to local historian Carolyn Keen.

At about 220 years old, the Carrollton House continues to stand the test of time.

The building near the intersection of Reynolds Drive and Norsworthy Drive in northeastern Isle of Wight County was, for generations, the heartbeat of the community. It has served, at various times, as a country store, a tavern, a post office, and as a private residence.

Likely built by Samuel Carroll in the late 18th century, the community was named after the home’s builder; he also ran a shop there, thus giving the area an additional identifier — Carroll’s Shop.

The house’s age likely “makes it probably one of the oldest houses in Isle of Wight,” said Fran Eversen, who, along with several family members, own the house and about 46 acres of surrounding land. “The way the deed is written,” Eversen said, “it’s a little hard to take care of the property, because it’s not owned by one person. That makes things a little difficult.”

But a question for the Carrollton House and other vintage properties throughout Isle of Wight, Hampton Roads and Virginia is, does age automatically equal historical value? Eversen, who said her family has owned the property since the late 1960s, said the house doesn’t currently have any protective or historic status.

“My father bought all of the farm in the late very late 1960s, so it has been in my family since like ’69, ’68, something like that,” she said. “I think the house should be saved; at this point, I’ve got to get windows in it or it’s going to fall down.”

Eversen, who resides in Norfolk, said the home was last regularly occupied about 10 to 15 years ago. It’s vacant now and not in liveable condition. “The last tenants took out some of the historic mantles and stuff and they didn’t do too good a job in taking care of it,” Eversen said. Unfortunately, in the years since the last residents left, “vandals have broken every window in the house. I have to do something, or else the inside of the house is going to be gone too.”

If the house disappears, so will more than two centuries of community history. It’s a 2-½ story frame house, with a gabled roof, two brick chimneys and pine flooring, according to a historical report prepared in 1936 by the Works Progress Administration under the administration of President Franklin Delano Roosevelt.

Former owner Bob Groce, whose surname is also listed as Gross in various documents, “was about to fail in the store business, so Mr. Joe Jordan bought out his stock and ran a store here. Mr. Jordan owned the greater part of Carrollton and the property around it,” according to the WPA’s report, which was provided to The Smithfield Times by local historian Carolyn Keen.

Jordan became postmaster in 1877 and by 1933, he was the oldest living postmaster in the United States, according to the WPA history and Helen Haverty King’s book “Historical Notes On Isle of Wight County, Virginia.” Jordan died in 1934. Today, the Carrollton Post office is about 2-½ miles away at 15108 Carrollton Blvd.

The Carrollton House might qualify for recognition and protection, based on criteria from the Virginia Department of Historic Resources. To preserve and recognize historically significant sites, the agency suggests that property owners or interested parties can nominate a property or historic district for listing in the Virginia Landmarks Register or the National Register of Historic Places. Listing in these registers is voluntary, and encourages but does not require preservation of the property — the buildings can be renovated or demolished.

A listing on these registries does, however, offer protection from some federally or state-funded activities that could jeopardize the property. It also may qualify owners for voluntary state or federal rehabilitation tax credit programs.

To qualify, a property should have achieved historical significance at least 50 years ago, be connected to an important person, event or trend, have important architectural design and retain physical integrity through historical materials, appearance or design.

A representative with DHR could not be immediately reached for comment by phone or email regarding the Carrollton House’s potential historical significance or to offer details on state historic preservation initiatives.

“I would like to keep it from deteriorating, I would like to do something with it, but financially it would take $150,000 I think for anybody to get it back where it should be,” Eversen said. “I don’t want it to fall down on my watch — leave it to the next generation to see if they can save it.”

Despite tropical storm challenges, it’s still easy to find great pumpkins in and around Isle of Wight. “I’d say the... read more