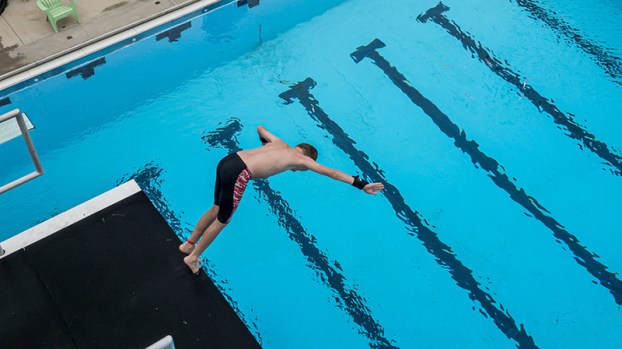 Matt begins his descent into the pool during a competition. He’s earned the All-American honor for his athletic achievements five times overall through his top tier finishes in competitions across the U.S.

Diver rises to the top

By perfecting his diving, Matt Pettit has risen to the top of his field.

The 12-year-old Smithfield Middle School seventh-grader already has an impressive list of competitive diving wins on his record and a collection of medals that are tangible reminders of his success.

His talent may run in the family as his mom Laura also swam, and dove, and later, coached.

“I started swimming and diving when I was 5,” she said. “I was a better swimmer, so I swam in college. And then when I graduated college, I took over coaching,” she said.

She doesn’t coach her son — that responsibility is in the hands of Keith Kopecky, who coached at Virginia Commonwealth University and Old Dominion University, according to his website.

Matt said he’d like to be a professional athlete and possibly compete at the Olympic level. “My teachers want me there, my family wants me there,” Matt said. And he wants to be there too.

Due to the coronavirus pandemic, many local aquatics facilities are closed or limiting access. Matt is currently training at the Dryland Center in Virginia Beach, which has dry boards, belts and trampolines for diving practice. For board practice, he trains at Midtown Aquatics in Newport News.

Asked if he had any diving role models, Matt smiled and pointed to his mom. Laura demurred, saying she hasn’t done any coaching in many years. She’s currently a math teacher at Smithfield Middle.

If they weren’t shut out of pool facilities due to the pandemic, “he would be diving five days a week. It pretty much takes up as much time as baseball or soccer or football,” Laura said. If it were a normal year, they’d be on the board and in the pool preparing for the first meet.

In contrast with swimming, to train for diving, “You have to do a lot more practicing on the dry belts and on the dry boards,” she said. It’s more about body positions, core strength and muscle strength. “Gymnasts have a very easy time switching to diving,” Laura said.

Matt said the reverse one and a half is one of his favorite diving moves. It took “a very long time” to perfect that one, he said. “We probably worked on it for at least two years,” Laura said.

Diving also has a daredevil flair not for the faint of heart — at the Olympic level, men may jump off a platform more than 30 feet high. But at every level, one of the hard things about training is avoiding belly and back flops. A few times, “I pancaked flat on my stomach on a dive,” Matt said. “I did not like that.”

When he’s not at the pool, Matt also enjoys playing baseball. By his own assessment, “I’m good at batting, but I’m not so good at pitching. But I am good at running.” He’s also a Boy Scout and eight requirements away from a promotion from Tenderfoot to Second Class scout.

High school athletes will have an opportunity to play 60% of their regular season starting in December. The 33 members... read more