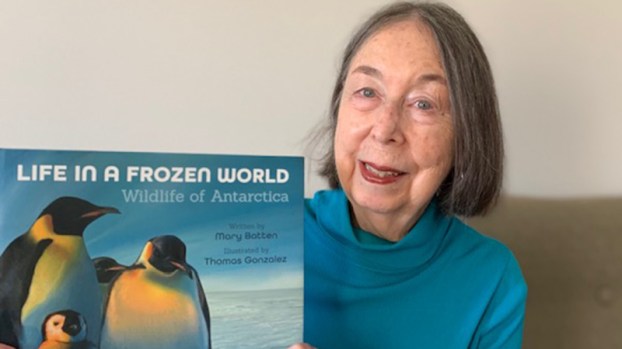 “Life in the Extreme,” local science writer Mary Batten’s new children’s book series, deals with the adaptations organisms have developed to survive in the harshest environments on Earth.

“Life is tenacious, grabbing onto cracks and crevices, taking up residence in places with such extreme conditions that you might think nothing could survive there,” says Batten.

The first book in the series, “Life in a Frozen World: Wildlife of Antarctica,” deals with the adaptations that organisms from the blue whale, the largest animal that has ever lived, to tiny plants called algae, have developed to survive in the ice, on the ice and under the ice. The book comes out Nov. 1 from Atlanta-based publisher Peachtree, which has published four of Batten’s previous books.

“One of the most amazing Antarctic creatures is the icefish,” says Batten. “They are the only vertebrates that do not make red blood cells. We humans and all other vertebrates make hemoglobin, the substance that makes blood red and carries oxygen to every cell in the body. The icefish’s blood is almost as clear as water. They don’t have scales and absorb the oxygen they need directly through their skin and gills. Icefish, and all other Antarctic fishes, also produce a natural antifreeze protein that keeps their blood from freezing solid,” she says.

Batten became fascinated by Antarctica while working for The Cousteau Society in 1990 when the renowned ocean explorer Jacques Cousteau mounted a mission to protect Antarctica for future generations. To dramatize the campaign, he took six children, one from each continent, to Antarctica. “We collected tens of thousands of signatures on petitions from schoolchildren in many countries,” she says, adding that 29 years later, in 2019, schoolchildren from some 100 countries marched in the streets to urge their governments to take action against climate change, which is already affecting Antarctica.

“In West Antarctica, the ocean and atmosphere are warming faster than anyplace else on the planet,” she says. She points out this has caused an alarming reduction in the penguin population on Torgersen Island from 15,000 breeding pairs to fewer than 3,000.

Antarctica may seem too far away to affect us, but rising temperatures of atmosphere and ocean in this frozen world affect weather and climate in other parts of our planet. Scientists estimate that the melting of Antarctica’s land ice will lead to a rise in sea level of between 3 and 16 inches by 2100. “We know from more than 50 years of research that climate change is causing increasingly extreme weather conditions around the world, from the fires raging in California to flooding in coastal cities,” says Batten, adding, “With knowledge, action can be taken to halt the process if politicians pay attention to the science, drastically reduce the use of fossil fuels, and invest in alternate energy sources such as solar and wind.”

Her book points out that dealing with climate change will take cooperation from the global community. “Antarctica sends us a clear message concerning the climate change crisis there and in the rest of the world,” she writes. One of the researchers she consulted during the writing of her book, Gary Wilson, professor of marine science at Otago University, New Zealand, said, “No one country is going to solve it on its own. It’s going to take each and every one of us to make a difference.”