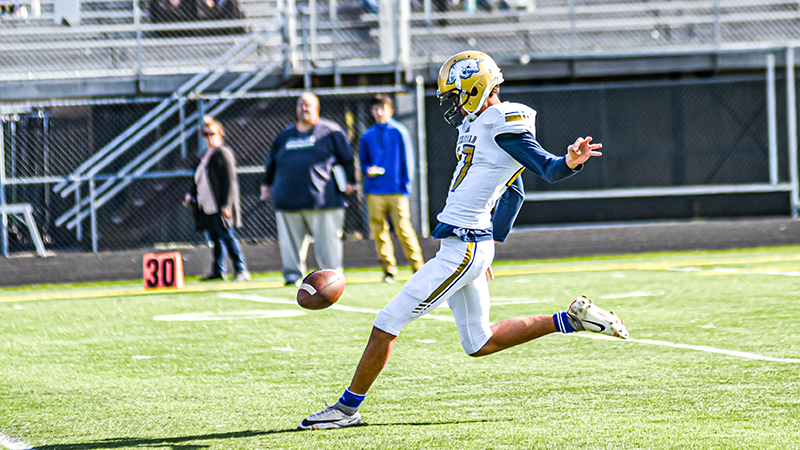 Josh Condit connects with the ball during a Smithfield High football game last season. The senior athlete’s performance at a recent camp in Charlotte earned him an award and an invitation to an upcoming event in Texas where coaches and recruiters will likely be watching.

The Smithfield High School senior’s performance at a recent kicking camp in Charlotte earned him the event’s Golden Boot award and an invitation to the 2020 Kicking World Showcase in Austin, Texas, on Dec. 5-6. He’ll be showing off his skills with some of the country’s best athletes.

Josh first joined the Smithfield High Packers last year. This year, he’s likely to be the varsity team’s only kicker. His performance on the soccer field at Smithfield caught the attention of the football team.

“I was practicing soccer, at high school practicing, and we were just practicing free kicks. I was kicking from half field toward the goal. And the football team was conditioning and the coach talked to me after that and said I should try out and see what happens.”

“They didn’t have a kicker at that time,” Josh continued. “I think that’s how a lot of soccer players get into football — I think like 90% of football kickers have a history in soccer, they’re soccer players.”

Josh grew up on soccer fields, literally and figuratively. He’s now 6 feet, 4 inches tall, and athletics is part of his DNA. Sports are an important element of his family’s life, too. “We’re a big soccer family,” he said. I think our whole family has played it, other than my mom,” he said.

“I played it one semester, one time,” Elly said. In addition to being her son’s biggest cheerleader, his mom also offers an analytical take on Josh’s athletic talent, focus and opportunities.

“Football has helped his soccer just like soccer has helped his football, because he’s really good at placing the ball to somebody, finding somebody in the field,” she said. “It’s really fun to watch him play because his ball will curve to the person and it’s right where it needs to be. So it’s really neat to see the accuracy of his kicks. It’s really neat to see him play both sports, because they piggyback on each other.”

Everyone in the family has been or is currently involved in sports — soccer, swimming, tennis or something else. So the past year, when the COVID-19 pandemic has curtailed athletic activities at all levels from pre-school to pro, has been hard.

Josh also plays soccer at Smithfield, and “my high school season actually got cut short — the whole season. We had two scrimmages. And so ‘corona’ has kind of condensed everything and so we ended up making up by having one tournament this summer,” he said. “Practicing was really hard, and there were all sorts of regulations about how many people could do it.”

“With him, he kind of taught me the fundamentals of technique and everything,” Josh said. “I definitely had no idea what going to that first day was going to be like. I was just kicking the ball as hard as I could.”

Although connecting your foot with the ball is a fundamental element of both sports, Josh said a key difference between soccer and football is that in soccer, arm motions are more conscious and part of your body movements.

Elly said college coaches are aware of Kicking World and said the program has a good reputation and visibility. Josh is interested in pursuing a college soccer career, possibly at James Madison University. He’d like to go to a Division I or Division II school for soccer “but it’s so hard with the coronavirus and visibility,” for athletes, he said. Scholarship opportunities will also be a deciding factor.

For people who aren’t connected to the sports world, Elly explained that competition for college football opportunities is so fierce at top tier schools that in most cases, coaches and recruiters approach students. For soccer though, it’s often the other way around.

From an academic perspective, Josh said he’s interested in education or teaching as career possibilities.

But getting the attention of athletic recruiters or even finding a spot on a team roster may be further complicated by COVID-19. In response to curtailed or canceled seasons, many college student-athletes were awarded an additional year of eligibility, so “it’s really hard” to get a spot on rosters at Division I schools, Josh said.

Kicking World helps players refine their skills and approach. The organization bills itself as providing “the best football kicking instruction in the world” and says it coaches and trains more than 1,500 students annually from age 9 through professional athletes in 50 camps in 30 cities in 20 states.