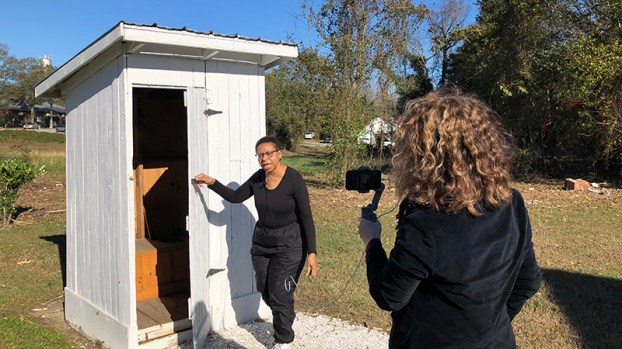 Phyllis Wellons, left, docent of the Schoolhouse Museum in Smithfield, explains the significance of a replica outhouse at the museum. The outhouse was often part of daily life for Black students in Isle of Wight County several generations ago while Jennifer England, director of the Isle of Wight County Museum records a video to share with the community on social media as part of an ongoing project to showcase the history of important buildings in the community.

If a picture is worth a thousand words, videos are probably exponentially more expressive.

The Isle of Wight County Museum has turned to two of today’s preferred platforms — video and social media — to help share and preserve the community’s stories, people and places as part of a recently debuted video series, “Behind These Walls.”

Produced by the museum and hosted by Kathy Mountjoy of the Smithfield and Isle of Wight Convention & Visitors Bureau, the series is focused on some of the county’s most interesting and significant structures.

“Isle of Wight has a tremendous amount of stories that are wonderful to share,” said museum director Jennifer England. The videos, she added, “seem like the perfect format.” The museum has produced videos for several years and also has the Ham Cam, doing a live video every Tuesday and Thursday on its Facebook page. “Once COVID hit, I thought instead of doing it in front of the Ham Cam, we can use Facebook to go mobile, so once I was able to go mobile with all of this, I thought there’s nothing to stop us now.”

So far, the museum has featured Four Square, a residence in Smithfield’s historic district that dates to 1807; Christ Episcopal Church, which was established in 1832 and recently renovated; the William D. Folk House, which was built in 1876; and Oak Level, which was built in several stages starting in 1768 near the Isle of Wight Court House. Several more videos are set to publish soon.

On a recent warm early fall day less than a week before Thanksgiving, England, Mountjoy, and museum curator Mike Holtzclaw visited another local landmark to capture its story — the Schoolhouse Museum.

“In a one-room schoolhouse this size, you could have from grade one through grade seven in one room with one teacher,” Phyllis Wellons, the Schoolhouse Museum’s docent, explained during a video taping session. “For the most part, that’s the way it was done.”

The Smithfield Schoolhouse Museum was built in 1932 as an addition to the Christian Home School, a Rosenwald school that dated to 1924. A century ago, Julius Rosenwald, a former president of Sears, Roebuck and Co., partnered with Booker T. Washington, a renowned Black educator and writer, to build thousands of schools in the south for Black students.

Local communities, including Isle of Wight residents, petitioned the county for money to expand the Christian Home School. This addition to the original Rosenwald building, which stood near Chuckatuck, was moved to Main Street in 2005 and opened as a museum in 2007. The remains of the 1924-era Rosenwald-funded building were unfortunately too deteriorated to preserve.

Wellons, a native of Isle of Wight County, said it’s often an eye-opening experience for young and old alike who may not appreciate how basic — even austere — rural one-room schoolhouses and education were a few generations ago.

Seeing firsthand how basic the building and services were back then may help today’s generation better appreciate how different things are today, “because you have everything right at your fingertips, so you are truly blessed.”

The teacher and students — who often walked miles to school — were expected to clean the building themselves. Older students often served as instructional assistants for the youngest students. Heat was provided by a wood or coal burning stove. Sometimes if there wasn’t any running water, students would fill up water buckets at a nearby home. And an outhouse was the school’s only restroom facility.

Before getting involved with the Schoolhouse Museum leadership, “I had never been inside of an old schoolhouse myself,” Wellons said. “When my mother went to school, they already had the first Black public high school built in this county, — it was Isle of Wight Training School,” she said. The school was later renamed Westside High School.

England said the museum is accepting suggestions on other Isle of Wight buildings to feature. The museum’s phone number is 757-356-1223. Visit historicisleofwight.com or the museum’s Facebook page to watch the videos produced so far.

Elementary and middle school students may take local assessments this spring instead of Standards of Learning tests in history, social... read more

Smithfield doctor that made house calls dies at 91

FRHA seeks to buy house in Isle of Wight

Smithfield facility will ‘earn your sweat’