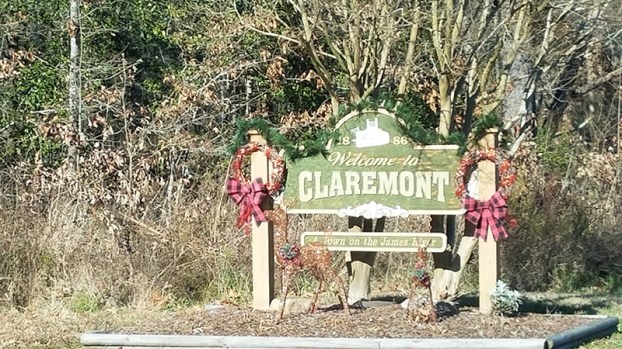 An online petition signed by 61 Surry County residents seeks to dissolve the town of Claremont.

Incorporated in 1886, the roughly 2-1/2-square-mile riverfront town located at Surry’s border with Prince George County had just over 350 residents in 2019, according to U.S. Census data. Were the town to give up its charter, Claremont would cease to have its own elected government separate from the county.

“It’s about who can do the job better,” said Howell Godfrey Jr., one of the petition’s organizers.

Specifically, Godfrey’s “Claremont Consolidate” petition cites “planning and economic disparities,” to include an “inability to implement and comply with the Chesapeake Bay Preservation Act” and the town’s “need of financial assistance” for a water system upgrade.

Virginia’s Chesapeake Bay Preservation Act is a state law that requires counties, cities and towns in the Tidewater area to ensure construction projects within their incorporated limits comply with the Act’s protections for the bay and its tributaries.

According to Gregory Bilyeu, a spokesman for the Virginia Department of Environmental Quality, the DEQ has not yet completed its review of Claremont’s Chesapeake Bay program, nor made any official findings of non-compliance with the Act. However, a preliminary report of the findings DEQ inspectors made June 15 through Nov. 29, 2020 states only one of the 11 zoning and building permits DEQ staff reviewed that year indicated a resource protection area on the plan — and that permit showed only a 50-foot vegetative buffer between the project and the James River, rather than the required 100 feet.

According to the DEQ’s website, RPAs, which include the 100-foot buffer, “serve a direct water quality function by removing excess sediment, nutrients, and potentially harmful or toxic substances from groundwater and surface water entering the Chesapeake Bay and its tributaries.”

According to the report, the town currently reviews zoning permit applications for compliance with its zoning ordinance, then tells the applicants to take the permit to Surry County to have their building permits issued. According to the DEQ report, Claremont Mayor George Edwards told DEQ inspectors on June 30, 2020, that the review of all applications other than zoning permits, to include site and subdivision plans, is “the responsibility of Surry County,” though no such arrangement is indicated in the town’s ordinances nor in a memorandum of understanding between the town and county.

During its 2009 compliance evaluation of Claremont, the DEQ reviewed a 2007 subdivision plat for Claremont Beach that had been approved by Surry County at the town’s request, seeming to confirm the mayor’s statement. But that application did not include a review of the plat for Bay Act requirements and an MOU between the town and county regarding Bay Act responsibilities, which was being negotiated that year, was never signed.

During its 2020 compliance evaluation, DEQ inspectors also spoke with William Saunders, who had served as the county’s director of planning until August of last year, when he left to become the new town manager of Windsor in Isle of Wight County. According to the report, Saunders is alleged to have told the DEQ that the county issues building permits for construction occurring within town limits and conducts erosion and sediment plan reviews and inspections, but does not review site plans, subdivision plats or provide a review of Bay Act requirements.

“The net effect of this situation is that the Bay Act is not being implemented within the Town of Claremont, and has not been for some time,” the preliminary report concludes. In the absence of a signed MOU delegating this responsibility to the county, “the town is responsible for the implementation of … Bay Act ordinances and needs to have the capacity to implement those ordinances, which mean staff capacity and necessary tools.”

Town, county and DEQ officials each confirmed to The Smithfield Times that a meeting of the three governing bodies took place Oct. 19 in Claremont’s Town Hall to discuss the state agency’s preliminary review. But that’s where accounts of what happened begin to differ.

The petition’s claims of Claremont’s alleged “planning and economic disparities” and “need of financial assistance” appear to have come from a similarly worded letter Surry County Administrator Melissa Rollins sent Edwards on Oct. 26. Rollins’ letter, which the petition refers to as “exhibit A,” claims the DEQ has now “mandated” that the town and county enter into a formal MOU to regulate Bay Act compliance, which “could be written” in such a way that would encompass the other alleged issues “adversely impacting the economic vitality of the Town.” Per her recap of the Oct. 19 meeting, the county “proposed providing assistance to help remedy Bay Act compliance and other aforementioned issues that would require a retooling of the Town’s capacity.”

“Relinquishment of the Town’s charter as its own separate governmental entity and taking a historical designation was proposed by the County as a viable resolution,” Rollins states.

But per the mayor’s account of the meeting, Rollins, Surry Board of Supervisors Chairman Robert Elliot and Saunders’ interim replacement, David Harrison, “walked in, uninvited.” When DEQ officials began to discuss the need for an MOU, Harrison allegedly said he would recommend the Board of Supervisors not enter into the proposed agreement, and instead “suggested that Claremont give up the Town Charter and be absorbed into the County.”

“Council and I have had enough of the untruths and would like to take this opportunity to correct the nonsense,” Edwards posted to the town’s Facebook page Dec. 14. “This is a simple document used by many municipalities who do not have their own staff and have part or all of those duties taken care of by a larger entity. This has always been the case with Claremont and Surry County … Now DEQ would like, for what has been done for years, to simply be put in writing.”

As such, the alleged Bay Act violations “reflect on Surry County more so than Claremont,” he said.

In a Dec. 15 letter, Elliot weighed in on the matter, disputing Edwards’ and Rollins’ earlier assertions that the DEQ was mandating a town-county MOU.

“While towns and counties may enter into such a Memorandum of Understanding, the County Attorney has advised me that it is not required, and in the absence of a voluntary agreement, the Town is responsible for its own Chesapeake Bay compliance program,” Elliot writes. “To my knowledge, while the County does review building permits in the town and reviews compliance with erosion and sediment requirements, the County has never monitored Chesapeake Bay compliance in the Town. The same is true for the Town of Surry … It is therefore incorrect to say that this is something that has been ‘done for years’ and should ‘simply be put in writing.’”

Elliot further denies Harrison having said that he would tell the Board of Supervisors not to enter into the MOU unless the town gave up its charter.

Even if he had, “it is not his decision, it is the Board’s decision,” Elliot wrote. “If the County receives a formal written request from the Town Council (not just from you as Mayor) to enter into a Memorandum of Understanding, or on any other issue, including a request to guarantee a loan from the Virginia Resources Authority regarding improvements to the Town’s water system, the administration will review that request and it will go to the Board of Supervisors for a decision. … While I agree with Mr. Harrison that there are potential advantages to the Town by giving up its charter, the County is not trying to use this issue ‘to attempt a strong-armed takeover of the Town of Claremont.’ Any issues the Town has with DEQ over the implementation and enforcement of Chesapeake Bay regulations are not the fault of the County.”

Godfrey, who attended the Oct. 19 meeting as chairman of Claremont’s Planning Commission, spoke during the public comment segment of the Dec. 2 Claremont Town Council meeting as a “concerned citizen,” claiming that “rather than working with DEQ to prevent multiple $32,500 fines, our leadership has elected to spend $3,000 on retainer fees in preparation to fight DEQ.”

But according to Bilyeu, there has been no discussion at the DEQ of civil penalties.

According to Edwards’ Facebook post, the town has retained the environmental law firm Pender and Coward to “negotiate a solution with the County,” though a Nov. 7 letter from Edwards to the county threatens that “if the Town incurs any monetary damages resulting from the lack of cooperation from the County with Claremont’s desire to seek a resolution to this simple matter, the Town will have no choice but to sue Surry County for all monetary damages and attorney fees.”

Speaking to The Smithfield Times, Edwards said he’s waiting to hear from a contractor who will provide Bay Act enforcement services to the town.

“At that point, the county will not need to provide anything to the town other than building permits,” he said.

Godfrey added that he wasn’t looking to completely do away with Claremont’s Town Council. The mayor and that body, he suggested, could stay on “in a ceremonial capacity” for the purposes of organizing town parades and the like.

As for the petition,  “There’s no scenario in which that would happen,” Edwards said. “The town is debt free. We paid off our last loan two years earlier than expected. We are financially in very good shape and we have a very good lead on producing the funds for our water improvement project. We’ll be finding out about that in the next 30 to 60 days.”

As we turn the page into 2021, there’s some good news for real estate — home prices are up. If... read more

Find out what’s in your (well) water

IW school board meeting this week