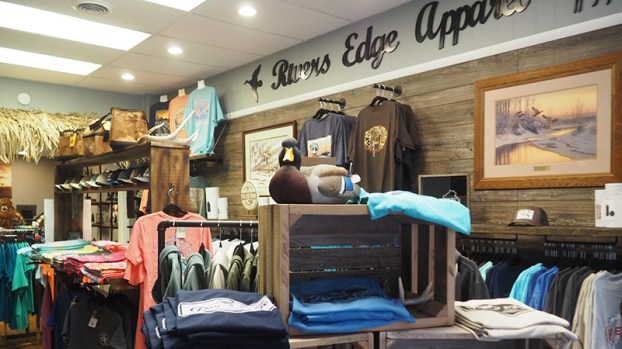 Nicholas O’Reilly of Smithfield, who had the honor of being the first official customer to walk through the doors of River’s Edge Apparel on its opening day, Feb. 11, describes the establishment as a “guy store.”

“It’s perfect for what we needed in Smithfield,” he said.

The store, in the words of its owner, Samantha Foster, owes its origins to “a hole in the market.”

“There are very few places in town that offer men’s merchandise,” she said.

She’s heard more than one man remark to her that when his wife visits downtown, he’ll stay in the car because there’s nothing in which he’s interested.

Foster runs River’s Edge and an embroidery supply store, Sew Personal Boutique, with her business partner, Lauren Oliver. When 207 C Main St. came on the market last fall, the two had briefly discussed moving Sew Personal across the street — resulting in rumors abounding and several phone calls inquiring about leasing Sew Personal’s current home in the old clerk’s office next to the 1750 Courthouse — but ultimately decided to open River’s Edge instead.

“We actually had the name River’s Edge Apparel established already,” Foster said. “Back in 2014, my husband and I had the idea to make some T-shirts and sell them, and we sold a crazy amount of tees … everyone wanted more, but Sew Personal started picking up and we just didn’t have the time to make it happen.”

In addition to Foster’s and her husband’s own creations, the store sells a variety of clothing brands themed around Southern culture, including “Southern Fried Cotton,” “Southern Couture,” “Struttin’ Cotton” and “Southern Strut.” Not all are intended exclusively for men.

She admits trying to open a new business during a pandemic “sounds pretty crazy” but “prime real estate is hard to come by in Smithfield and we knew this location wouldn’t last long when people started hearing about it.” She plans to keep Sew Personal open at its current location and rely on its established customer base to get the word out about her new place.

“One of the things we take pride in is being a local business where everybody knows everybody,” Foster said. “We look forward to meeting new customers and knowing them by name the next time they walk in the doors. Lauren and I both grew up in Smithfield so opening businesses here and keeping Main Street booming is so important to us.”