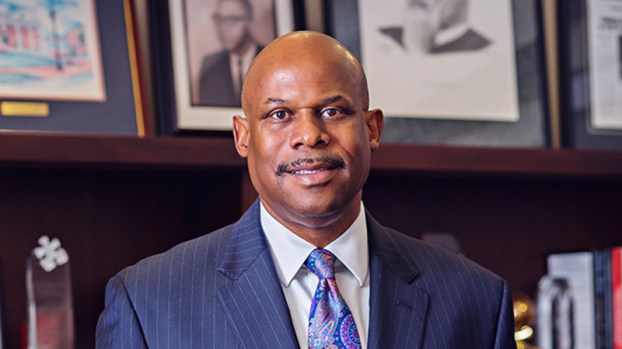 Warren M. Thompson, a native of Windsor, comes from a long line of successful Black entrepreneurs.

There’s his great-great-grandfather, Cleave Thompson, who was born into slavery around 1835. As Warren’s father, the late Fred Thompson Sr., told him the story, Cleave was allegedly on loan to the University of Virginia and, upon gaining his freedom at age 30, learned the blacksmith trade and set up his own shop in Afton roughly 30 miles away from the college.

There’s his grandmother, Hattie Warren, of Zuni, who, in 1945, became a licensed, self-employed midwife, delivering over 1,000 babies in Isle of Wight and Southampton Counties for $25 apiece.

There’s Fred Sr., who dreamed of attending UVA but was rejected for admission on count of his race. He eventually attended Virginia State University, graduated and moved to Windsor, where he became an educator with Isle of Wight’s public school system — and started a sideline business on his family farm raising hogs.

Then, there’s Warren himself, whose memories of growing up in Windsor include hiding under a bed with his brother one night while the Ku Klux Klan burned a cross near his grandparents’ home. Another, more pleasant memory comes seven years later when 12-year-old Warren announced to his parents his dream of becoming a restaurateur while out to lunch at a Shoney’s restaurant in Portsmouth.

At age 14, he began his journey into entrepreneurship with a grass-cutting business, and by 15, had graduated to selling produce out of a school bus.

At 16, he negotiated his first leveraged buyout — purchasing the family hog business from his father, and after high school, used the proceeds to finance the managerial economics degree he received from Hampden-Sydney College in 1981. By 1983, he’d earned his Master of Business Administration from UVA’s Darden School of Business.

Nine years later, he’d make good on the promise he’d made to himself the day he announced to his parents that one day, he’d own his own Shoney’s restaurant. In 1992, Thompson completed a leveraged buyout of 31 Bob’s Big Boy restaurants from his previous employer, Marriott Corporation, and converted them to Shoney’s under the new ownership of his then-startup, Thompson Hospitality.

In 1997, Thompson partnered with Compass Group, the world’s largest food service company. While Shoney’s restaurants have largely disappeared from the Hampton Roads landscape, Thompson’s startup has since grown to become the largest minority-owned food service and facilities management company in the United States, employing roughly 6,000 associates and bringing in upwards of $760 million in revenue across 48 states and six foreign countries.

As president and chairman, Thompson oversees multiple restaurant brands, most in the Northern Virginia, Washington, D.C., and Maryland area, as well as food service and facilities management at 19 higher education institutions, most of which are historically Black colleges and universities.

In 2002, he was named to UVA’s Board of Visitors, fulfilling another promise — this one to his father — to transform his MBA alma mater from the institution that had denied Fred’s admission on account of race, to one more inclusive.

This April, Thompson’s two passions — food service and diversity activism — will collide with the opening of The Ridley in Charlottesville, a restaurant named for Dr. Walter Ridley, the first African American to graduate from UVA. The idea, he explained, is to name menu items in honor of Ridley and other unsung civil rights pioneers to get people talking about them. A portion of the proceeds will go to the Walter Ridley Foundation, an African American scholarship fund.

Starting such conversations about race and “what symbols mean to certain people” is important to Thompson, now more than ever. Much of what he saw growing up in the 1960s “seems to be coming back around again now, the racism, the divisiveness.”

“When I see the Confederate flag, I have flashbacks to childhood growing up in the South,” he said. “The South has always been romanticized, the laid-back atmosphere … but there’s a lot about the South that brings back horror stories for many people. It’s hard to get excited about the South when the South was not good to African Americans. We can learn from the history and I think it’s important that we learn from it and not have it repeat as we see it right now. The whole [Jan. 6] attack on the Capitol was, from my perspective, history repeating itself. We have to make sure that doesn’t happen again.”

Asked what it takes to run a successful restaurant in 2021, with a global pandemic that’s now killed half a million Americans, Thompson is blunt.

“The industry is moving fast,” he said. “If you’re not on the forefront of what’s happening you’re already behind.”

The key, he said, is to look at revenue per square foot of rent. To get that balance right, his restaurants started downsizing 10 years ago, which he said has helped them stay afloat during the pandemic. The cost of labor is also increasing, as is the cost of food, but restaurants that hike their food prices may end up driving customers away with sticker shock now that so many are able to compare prices at home and order online.

“You have to enter the business well capitalized,” Thompson said. “The uncertainty of getting to profitability today is greater than it was 10 years ago. You have to be prepared for a downturn or a recession or a pandemic.”

Though Thompson now runs his company from Reston in Northern Virginia, his aunt and uncle, Lois and Sam Duck, still live in the Windsor area, as does his cousin, Carla Duck. The handwriting of his mother, Ruby W. Thompson — who, like his father, was an educator with Isle of Wight County Schools — is memorialized on the chalkboard at the Isle of Wight Schoolhouse Museum in Smithfield.

“I will never forget where I came from,” Thompson said.

On a recent sunny afternoon, evidence of a modest return to the pre-pandemic normal was audible from the front doors... read more