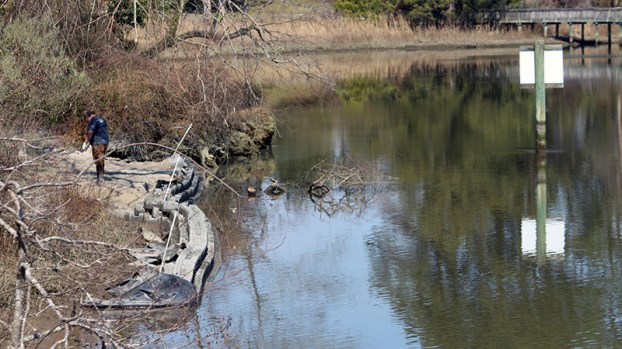 Work was in progress last week on a shoreline restoration project, along Cypress Creek in Windsor Castle Park. Environmentally friendly erosion control measures are being implemented through a partnership between several nonprofit and state agencies.

The Living Shoreline Collaborative is a group of regional and state entities working together to implement long-term erosion resiliency strategies along the James River’s tidal shorelines. Work was underway as of March 10 and weather permitting, it will conclude in about a week. In April, the area near the park’s kayak launch, will be planted with native marsh grasses as a final step, said Smithfield Parks and Recreation director Amy Novak.

Here’s how caretakers are working to slow erosion: first an oyster castle — special cinder blocks made of a blend of concrete and oyster shells — were put in place between the water and the eroding shoreline. That area is backfilled with sand then planted with native plants and grasses.

Essentially, the project extends the high tide line further away from where it’s eroding, said Ryan Walsh, who is the Lower James restoration coordinator with the Williamsburg-based James River Association. About 150 linear feet of park shoreline will receive the treatment.

Because the project is grant funded, Walsh confirmed there’s no cost to the Town of Smithfield.
Choosing a living shoreline versus a traditional bulkhead is “uncharted territory for a lot of folks,” Walsh said. “We figured with these demonstration projects we can show people that yes, this is something that can indeed work and something you can use.”

Two other local living shoreline projects are being implemented. One is in the Carrollton area on private property on Brewers Creek, which feeds into the Chuckatuck Creek. Another is in Prince George County. In exchange for allowing the park shoreline to remain in place for 10 years, the foundation will handle the maintenance for the first three years. At the park, “I believe the marsh grasses are going to take off pretty quickly — fingers crossed — within the first growing season, certainly within the second growing season,” Walsh said.

Living shorelines and bulkheads start and end their lifespans much differently, Walsh said. A seawall or bulkhead starts strong but eventually doesn’t work well the older it gets. The reverse is true with a living shoreline. It needs time to mature but in a short while, its long-term effectiveness is excellent, with the added benefit that it’s more environmentally sensitive and more visually appealing than a big bulkhead.

There’s also a legislative mandate to try a different approach to controlling erosion. Senate Bill 776 became law in July 2020. It puts into law that living shorelines are the preferred solution to dealing with erosion problems in Virginia. “What that means,” Walsh explained, “is you have shoreline property that’s eroding, you must first prove that you cannot build a living shoreline there if you want to build a revetment or a bulkhead.”

Novak said the James River Association approached the town about the project opportunity. She said the project is good news for anyone who appreciates the park trails. “A considerable amount of the trail is waterside, so if we don’t do things to prevent erosion, we’ll lose a portion of the trail over the years,” she said.

Walsh said the projects in Isle of Wight and Prince George County are part of a collaborative effort with a grant received by the National Fish and Wildlife Foundation. Key partners include Virginia Institute of Marine Science, Wetlands Watch, Friends of the Rappahannock, Virginia Commonwealth University, Bay Environmental and the Virginia Department of Recreation and Conservation’s Shoreline Erosion Advisory Service.

Surry County Supervisor Kenneth Holmes has resigned from the Board of Supervisors. The board has scheduled a virtual meeting for... read more