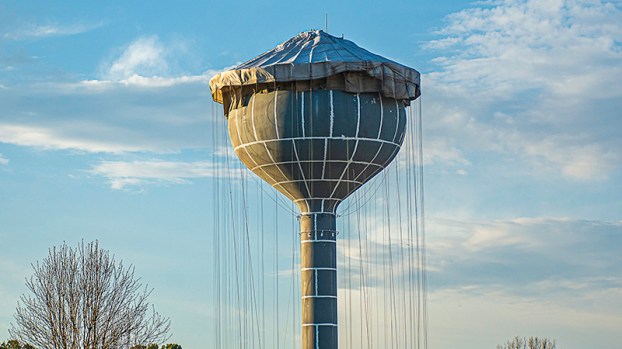 Smithfield’s Church Street water tower will have a new light blue paint job and a fresh new logo with the town’s name and tourism slogan — “Savor Our Small Town Southern Charm” — on the side in huge letters.

Just in time for spring, a highly visible piece of town infrastructure will have a new look.

Smithfield’s Church Street water tower will have a new light blue paint job and a fresh new logo with the town’s name and tourism slogan — “Savor Our Small Town Southern Charm” — on the side in huge letters. The logo was designed by the Smithfield and Isle of Wight Convention and Visitors Bureau, and the colors will be similar to what the visitor’s bureau uses in its branding.

“It won’t look exactly like it did before,” said Jack Reed, Smithfield’s director of public works and utilities. “It’s going to be a lighter blue. It’s going to look like the Battery Park tank, it’s kind of a really pale blue.”

More important than looks is the work undertaken to ensure that the tank stays functional and safe.

“The tank has undergone a fairly large rehab,” Reed said. “All of the interior has been sandblasted and repainted — all of that has actually been completed. The inside where the water is — we call it the wet interior — that was all redone and repainted.”

The tank also received minor structural repairs to the ladder and a vent on top. The project cost about $600,000.

Suburban Contractors is performing the work on the tank. Quinn Consulting Services performed the inspections, and Kimley Horn is the town’s consulting engineer for the project. All of the work was preventive in nature.

A temporary tent, which gave the tank a more grain silo-like silhouette for several days, enclosed the structure from top to ground level to capture sandblasting debris. “We’re kind of in the home stretch right now where the exterior is being repainted, and that’s what you’re seeing,” Reed said. “It was completely sandblasted to metal and that’s why you saw the containment. That’s the big tents you saw over it.”

Built in 1984, the 128-foot-tall tank can hold 400,000 gallons of water. In general, the paint lasts about 15 years, and the previous paint job was “just at the end of its life,” said Reed. Although the 36-year-old Church Street tank could be considered “middle aged” for a piece of infrastructure of its type, Reed said it’s in good shape for its age.

The Church Street water tank should be back in service by April 1. Other water tanks are also slated for maintenance in coming years. “As of now, in our capital improvement plan, we’re looking at doing the Wilson Road tank in 2023 and the Battery Park tank in 2025,” Reed said.

Another project, the replacement of water and sewer lines on Grace Street, is underway and going well, Reed said.

Most of the sewer main lines are completed, nearly all manholes have been placed and work has now begun to run lateral lines from the sewer main to individual homes. Once the sewer work is completed, water line replacement work will begin, Reed said.