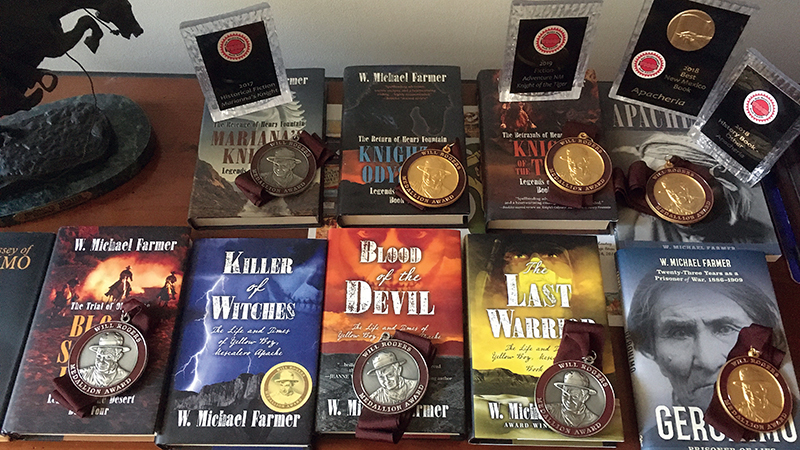 On a cold winter’s day in 1896 near White Sands, N.M., Albert Fountain — a statesman in the then-U.S. territory’s legislature — and his 8-year-old son, Henry, vanished. Their bodies were never found.
Three years later, Fountain’s political rival, Oliver Lee, stood trial for Albert’s and Henry’s presumed murder, but was acquitted after only eight minutes of jury deliberation — despite an 18-day trial that included more than 60 witnesses.
As far as history books are concerned, that’s where the story ends — an unsolved mystery to this day. But for Isle of Wight County novelist W. Michael Farmer, it’s only the beginning.
Farmer’s foray into fiction began in 2005 with his debut self-published novel, “Hombrecito’s War,” which assumes Henry survives his father’s murder and is found by a Mescalero Apache sharpshooter named Yellow Boy, who mentors him to adulthood and accompanies him on a journey of bloody retribution against the men responsible for Albert’s murder. He’s since authored three sequels, now published by Gale-Cengage/Five Star as the four-part “Legends of the Desert” series, as well as a spinoff trilogy — “Killer of Witches,” “Blood of the Devil,” and “The Last Warrior” — which tells the history of the Mescalero Apaches from 1865-1918 through the eyes of Yellow Boy.
Farmer’s fascination with the American West began in the 1950s and ’60s, growing up in middle Tennessee at a time when Westerns were the premier genre for books, movies and TV shows.
“Like everyone else, I regularly watched and read Western stories,” Farmer said. “Gary Cooper, John Wayne, Randolph Scott, Clark Gable, and a host of other lesser-knowns were my early models for courage and personal behavior in hard times. I remember reading about Indians when I was in the fourth grade and thinking how unfairly they were treated.”
A Ph.D. physicist by trade, Farmer was teaching at the University of Tennessee Space Institute when a contractor at the White Sands Missile Range offered him a job in Las Cruces, N.M., where he’d live the next 15 years. Not long after relocating, Farmer learned the story of the presumed Fountain murders from his colleagues who were lifelong Las Cruces residents, and became fascinated with the mystery.
He began reading everything he could on the subject, from Leon Metz’s biography of 19th-century sheriff Pat Garrett — which assumed Lee to be the guilty party — to “Tularosa” by Dr. C.L. Sonnichsen of the University of Texas El Paso, which theorized people of the day may have been too quick to pin the crime on Albert’s political rival.
“There were at least 30 people who swore they’d murder Fountain one day,” Farmer said. “Over the years I lived in Las Cruces, I roamed the countryside, becoming familiar with the mountains and deserts and often wound up coincidentally visiting the areas that were major points of interest in the case.”
In 1998, Farmer accepted another job as an analyst with the Army Distance Learning Program at Fort Monroe and moved to Smithfield, where he married Carolyn Keen of the Isle of Wight County Historical Society. At the time, he was working on a nonfiction technical book, “The Atmospheric Filter,” which he published in 2000. It wasn’t until after reading “Warlock” by Oakley Hall, who had stated that the business of fiction was to “find the truth, not the facts,” that Farmer decided to try his own hand at writing a novel that would fill in the gaps in the Fountain mystery.
“I expected to write no more than 20,000 words,” Farmer said. “When I got to the end, it was 160,000 words.”
The resulting “Hombrecito’s War” ended up winning a Western Writers of America Spur Finalist Award for best first novel in 2006, and the 2017 New Mexico-Arizona Book Award for historical fiction when republished as “Mariana’s Knight” — the first of Farmer’s four-part Legends of the Desert series.
“More importantly, I discovered in writing “Hombrecito’s War” how much passion I had for writing. I had to write.”
Now retired, Farmer has become a prolific writer, with several fiction and nonfiction works taking additional awards. In 2019, the “Mariana’s Knight” sequels “Knight’s Odyssey” and “Knight of the Tiger,” and a collection of nonfiction essays and photos titled “Apacheria,” which Farmer had authored to provide historical background on late 19th- and early 20th-century Apache culture for his Yellow Boy novels, won Will Rogers Gold Medallion Awards. “The Last Warrior” and book four of the Henry Fountain series, “Blood Soaked Earth,” won silver Will Rogers awards Feb. 6 this year for 2020.
His latest novel, “The Odyssey of Geronimo,” which tells the tale of the Apache leader’s 23 years in captivity as a prisoner of war, was published in mid-November 2020. A sequel, “An Apache Iliad,” is planned for release in 2021 or 2022.