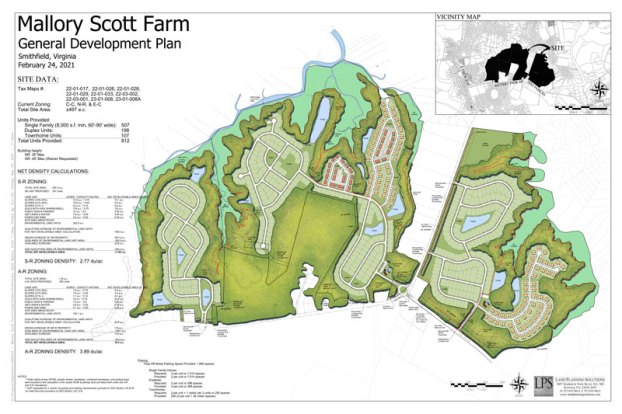 The 812 residences proposed for the Mallory Scott Farm development are predicted to generate between 500 and 650 additional cars per hour traversing the intersection of Battery Park and Nike Park roads.

That’s according to a May 7 traffic impact analysis the project’s Virginia Beach-based developer, Napolitano Homes, and the Virginia Department of Transportation conducted.

A previous proposal that went before Smithfield’s Planning Commission last fall showed 1,106 residential units. The revised 812-unit proposal, a 25% reduction, will go back to the Planning Commission for another public hearing Tuesday, May 11, at 6:30 p.m.

At the previous hearing, held Oct. 13, 2020, John Napolitano, senior vice president of Napolitano Homes, argued the resulting population growth would be gradual over the next 10 to 15 years as the development reached its ultimate size.

According to Jason Fowler, an engineer with VDOT’s Franklin Residency, the state agency uses the Institute of Transportation Engineers Trip Generation Handbook to predict the number of additional cars on local roads as a result of a proposed housing development. Per that calculation, a single family dwelling contributes about 10 trips per day.

No more than 100 homes are to be occupied by 2022, which translates to about 1,000 trips per day. Napolitano Homes’ proposed proffer agreement stipulates up to 125 homes per year in subsequent years.

But the traffic figures don’t factor in internal capture reductions.

“This reduction assumes a vehicle would travel within the development to a certain destination and not contribute additional trips to the main roadways,” Fowler said.

The development plans call for the creation of a roundabout at the intersection of Battery Park and Nike Park roads.

A 2006 rezoning allowed for the construction of 265 single-family homes on the property, but the 2008 recession caused that project to stall. A 2018 independent study commissioned by Isle of Wight County Schools estimated the 265-home project would have added 85 students to the county’s school system.

Editor’s note: This story was originally published May 8 and updated at 4:07 p.m. May 10 with additional statements from... read more