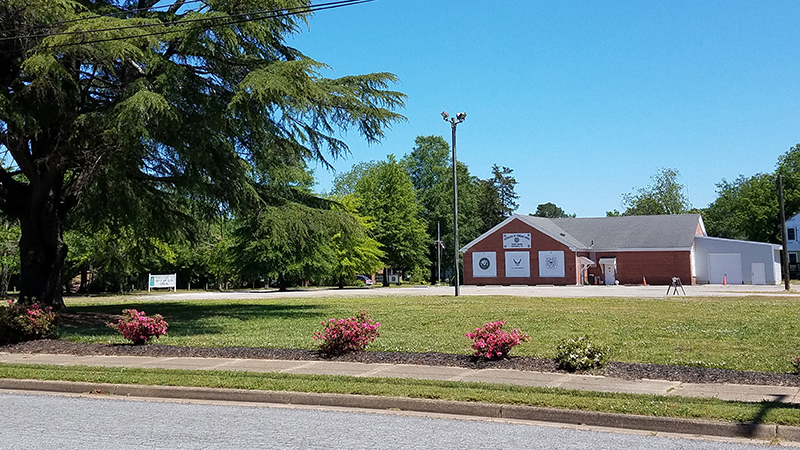 The town of Smithfield has agreed to sell the vacant lot at the corner of James and Washington streets to former Smithfield Foods chairman Joseph W. Luter III. The Veterans of Foreign Wars and The Children’s Center buildings are not part of the deal.

Smithfield’s Town Council voted unanimously May 4 to approve the sale of town-owned land at the corner of James and Washington streets to former Smithfield Foods chairman Joseph W. Luter III.

The sale excludes two buildings currently located on the parcel, one the town leases to Smithfield’s local Veterans of Foreign Wars chapter and the other to The Children’s Center. At that same meeting, the council voted 6-0, with Mayor Carter Williams abstaining, to renew the VFW’s lease another decade for $1 a year.

Officially, the land will be deeded to LSMP LLC, a company Town Attorney William Riddick III set up for Luter last year while representing him in his efforts to acquire the former Little’s Supermarket building on Main Street and a 1730s-era farmhouse known as Pierceville. Luter had both structures razed last December and has since been trying to acquire additional land for a proposed development of unspecified size on the west end of town.

In February, Luter made preparations to acquire an early 1900s canopy gas station located across the street from the Pierceville property, which is currently occupied by Gimme Shelter, a nonprofit thrift store that benefits Isle of Wight County’s animal shelter and humane society. Following some public outcry, Luter agreed to sell the gas station to Smithfield businessman Mark Hall, who gave Gimme Shelter a stay of eviction while he makes plans to restore the structure.

The land at the corner of James and Washington, however, is not contiguous with the Pierceville or Little’s parcels. Per the terms of the sale, Luter has agreed to pay the town $225,000 for the land, with the condition that the town use the proceeds to extend Main Street’s brick sidewalks to his planned development.

According to Town Manager Michael Stallings, plans for a sidewalk extension in this area were already under development at the county level.

“We will just have to cover the additional cost to go from their planned sidewalk to brick,” he said.

According to Smithfield/Isle of Wight Tourism’s most recent monthly report, there was a Pierceville design workshop on April 19 at Aberdeen Farm, a private event venue on Days Point Road just outside town. But Stallings says the town hasn’t received any draft submissions of a site plan for the development yet, and therefore, couldn’t say exactly how many structures are planned.

Joseph Luter IV, son of the former Smithfield Foods chairman, wrote to Town Council on behalf of his father last year that the elder Luter envisioned “a high quality development” including office space, multi-family housing “for all income levels,” a “small boutique hotel,” townhouses, single-family homes, assisted-living accommodations and potentially, a walking trail built in conjunction with the Luter Family YMCA in town.