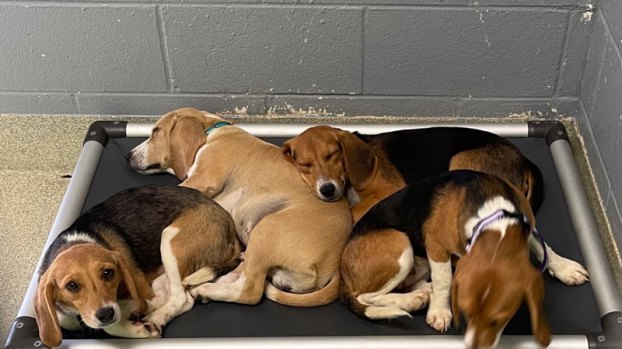 Isle of Wight County Animal Control personnel have removed 110 dogs and 150 other animals from a Windsor-area farm whose owner recently died.

According to Capt. Tommy Potter, spokesman for the county Sheriff’s Office and its Animal Control division, the family of the deceased voluntarily surrendered much of the livestock, which included cows, chickens, rabbits, goats, sheep and ducks, but wanted to keep a number of the dogs.

Owing to the living conditions animal control officers discovered May 27 when they conducted their initial welfare check of the property, the Sheriff’s Office opted to seize what the family wouldn’t surrender. But no foul play or deliberate neglect is suspected.

“His family were trying to find homes and care for these animals as best they could,” Potter said.

Sheriff’s Office personnel will need to appear before a judge at some point over the next few weeks, at which point custody of the dogs will either remain with Isle of Wight County or revert to the family if the family can demonstrate they are able to provide for them, Potter said.

Animal Control personnel removed many of the animals June 1 and returned the morning of June 2 to check traps they’d left. Potter wasn’t certain if any additional animals had been removed from the site as of that afternoon.

All animals are in relatively good health, Potter said. The Sheriff’s Office has been working with a number of rescue organizations and local farmers to find new homes for the animals. Some of the cows and ducks are now housed at the farm behind Windsor Elementary School where Isle of Wight County Schools operates its agriculture career and technical education program.

Some local farmers also loaned out the equipment needed for moving large quantities of livestock.

As of June 2, 50 of the dogs and a number of rabbits, chickens and roosters remained housed at the county’s Animal Shelter on Poor House Road, filling the facility to 90-95% of its maximum capacity.

Typically, the shelter runs between 60-70% capacity, Potter said, adding that the number of animals there had been down somewhat because of the COVID-19 pandemic.

“The staff here at animal services and the volunteers have spent long hours this weekend vetting the animals,” Potter said.

And even when there’s an incident like this, “you still have to take all your normal duties of picking up strays,” Potter said. “Things don’t stop.”

“We really want to stress this was a huge undertaking,” he said. “We, the Sheriff’s Office, could not have handled all of this logistically if it had not been for all the organizations that had stepped up to help.”

Smithfield’s Town Council voted 4-2 on June 1 to kill a proposed ordinance amendment that would have reversed the town’s... read more