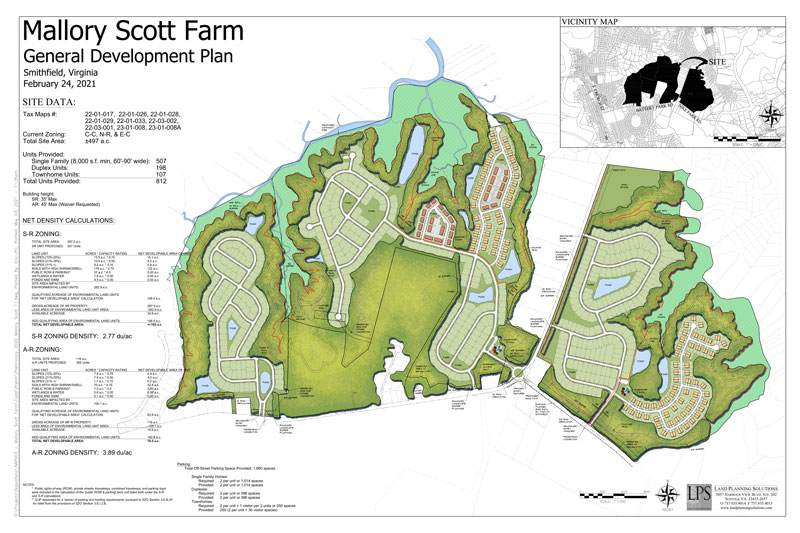 The proposed 812-home Mallory Scott development is heading to Smithfield’s Town Council with a recommendation for approval from the town’s Planning Commission.

The commissioners voted 6-1 June 8 in favor of granting the eight approvals Virginia Beach-based developer Napolitano Homes had requested. These include a rezoning request, amendments to the town’s comprehensive plan and zoning ordinance, three special use permits and two waivers from provisions of the zoning ordinance.

Napolitano Homes had previously requested to build 1,106 homes on the 500-plus acre site along Battery Park and Nike Park roads, but scaled the proposal down to 812 homes following a public hearing last October after opponents of the project argued the development’s large size would negatively impact Smithfield’s small-town character and burden Isle of Wight County’s roads and schools. Smithfield’s Planning Commission held a new public hearing on the revised proposal May 11, which drew more than 20 speakers — all in opposition.

At the June 8 meeting, Smithfield’s Town Council chambers were again filled to standing room only, with several attendees choosing to wear orange “Preserve Mallory Farm” T-shirts or “No Rezoning” stickers. Twelve speakers, some repeats from the previous hearings and some new, spoke in opposition to the project during the portion of the meeting reserved for citizens’ comments.

Several reiterated concerns that had surfaced at the previous two public hearings. Others spoke on the development’s potential environmental impact given its proximity to fingers of the Pagan River, and the lack of a hospital in Isle of Wight County that could accommodate the increase to Smithfield’s population once the development is built out.

Prior to the vote, John Napolitano, senior vice president of Napolitano Homes, assured the commission that a contract to resolve the Bradley property issue Commissioner Dr. Thomas Pope had called a “deal breaker” May 11 would soon be signed.

The Bradley family owns two parcels of land along Battery Park Road bisected by an easement to allow access to the Mallory property in its current agricultural state. The family could have found their property divided by an access road to the proposed development, but Napolitano says the contract offers a land swap by which they gain ownership of the access driveway in exchange for granting the town a 10-foot right-of-way easement.

Napolitano further spoke to the environmental concerns. In its current agricultural use, the Mallory Scott property may be subjected to commercial fertilizers, some of which may still contain phosphorus, he said. According to the website for the Maryland-based Chesapeake Bay Program, phosphorus runoff gets into the Chesapeake Bay or its tributaries, it can lead to algae blooms and low-oxygen “dead zones” where underwater life cannot survive.

But a Virginia law that went into effect in 2013 bans the sale, use or distribution of residential lawn fertilizers that contain phosphorus, which Napolitano argued was a point in favor of his proposed development.

“I am for this development … I feel he [Napolitano] has a certain amount of rights to do this,” said Pope, who made the motion to recommend approval of Napolitano’s proposal.

“I understand the overwhelming opposition to the applicant’s development … Not to be unsympathetic to the citizens, but as a commission of planners we must be cognizant of the NIMBY phenomenon, of citizens who will not be receptive to any change,” added Commissioner Charles Bryan, referencing the acronym for “not in my back yard.”

Commissioner Michael Torrey, who was the one dissenting vote on the approval recommendation, declined to comment on why he voted the way he did.

The matter will next head to Smithfield’s Town Council for further discussion and a final vote.