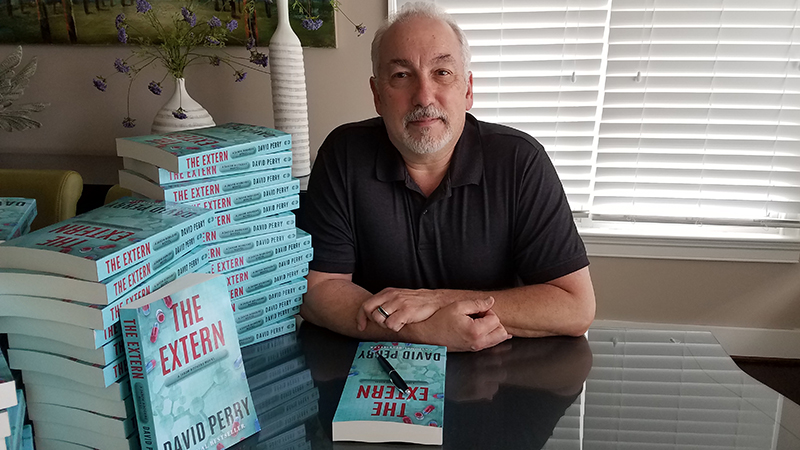 David Perry, of Carrollton, has drawn on his professional experience to write his novel, “The Extern,” which gives a gritty look into the real, fast-paced world of retail pharmacies through a fictional character.

A medical thriller novel by Carrollton author David Perry offers a behind-the-counter look into the fast-paced world of retail pharmacy.

“The Extern,” which was published this month, introduces Jason Rodgers, a last-year pharmacy student desperate to land an externship with Thomas Pettigrew, the meticulous owner of the prestigious Colonial Pharmacy. After the intimidating pharmacist batters him with rapid-fire questions during his interview, Rodgers meets a young woman who offers him a crucial piece of information in exchange for something only he can provide.

Rodgers uses her information to land the job, and an intense love affair ensues between the two. But unbeknownst to anyone at Colonial, two men with subversive and untoward intent are watching the pharmacy and its employees. In the coming weeks and months, Rodgers struggles to keep up with the fast-paced environment, and makes his first mistake — something Perry says happens all too often in the industry.

Rodgers’ endless stream of prescriptions, constant interruptions, demanding and rude customers and lack of meal breaks are all based on real-life experiences from Perry’s own career or hundreds of interviews with fellow pharmacists he conducted.

“Every pharmacist, including me, has been subjected to staffing shortages, more clinical programs, increased distractions and higher work goals,” Perry said.

In January 2020, The New York Times published an expose on the retail pharmacy industry, unveiling numerous instances nationwide where pharmacists, racing to meet performance goals some say are unsafe and unreasonable, have given patients wrong medications — sometimes with fatal consequences.

Perry, a retired pharmacist himself, has dreamed of being a writer since his days in pharmacy school in Boston. “The Extern” is intended as a prequel to Perry’s debut 2012 novel, “The Cyclops Conspiracy,” and its sequel, “The Cyclops Revenge,” published in 2018, both of which became national bestsellers.

All three are set in Virginia’s Peninsula area, where Perry lived for 20 years, and published by Pettigrew Enterprises, a self-publishing company Perry named for the character in his novels.

He’d been offered a contract to publish “The Cyclops Conspiracy” by a company in Austin, Texas, which ended up going bankrupt halfway through the process.

“I was devastated,” Perry said. “They had all my material, book cover, interior files … It took about four months to get all of that back through the bankruptcy court.”

At that point, he was left with a choice: find another publisher or self-publish. He chose the latter, and has since used his startup publisher to help other authors with editing and publishing advice. Still, it’s a lot of work, he admits, as those who self-publish must do all the marketing of their books themselves.

“Getting the word out requires a lot of leg work, lots of phone calls, book signings, social media promotions,” he said. “Having a good story also helps … and, of course, some luck.”

“The Extern” is available on barnesandnoble.com. The other two Cyclops series novels are currently available for purchase on Perry’s website, davidperrybooks.com, and on Amazon.com.