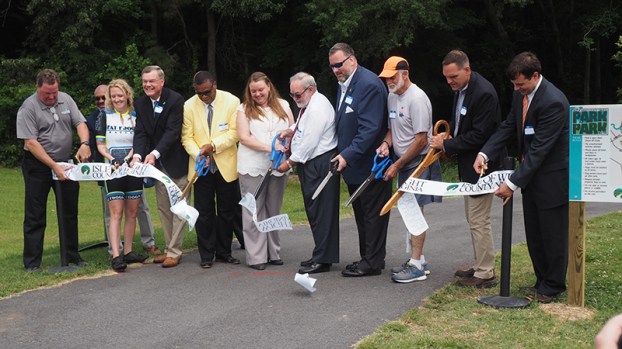 After more than two decades in the making, Isle of Wight County’s portion of the Carrollton to Smithfield park-to-park trail is finally complete and open to the public.

The $8.6 million, 10-foot-wide asphalt bicycle and pedestrian path now spans 3.1 miles down Nike Park and Battery Park roads. A town-funded segment will eventually extend the path down South Church Street and across the Cypress Creek Bridge in Smithfield to connect Nike Park with Windsor Castle Park.

“The trail isn’t complete, but we look forward to working with Smithfield to complete the last 1-mile segment,” said Dick Grice, chairman of Isle of Wight County’s Board of Supervisors at a ribbon cutting ceremony June 21.

Plans for the trail began around the turn of the millennium, he said, when a small group of county residents conceived the idea of a bicycle trail in the northern end of the county. In 2001, Isle of Wight’s Chamber of Commerce became an early champion of the project. By 2005, the county’s Department of Parks and Recreation had also endorsed the idea.

The project had initially been budgeted at $4.1 million, with over $4 million of that money coming from grants. In 2017, bids for the construction work came in roughly $2 million over budget, resulting in county officials reallocating money they’d planned to spend on road repairs to Route 620, which spans from just outside Smithfield to the Isle of Wight-Southampton county border near the town of Ivor.

“This is the largest locally-administered transportation project that the county has managed to date in size, scope and cost,” said Judy Winslow, director of the town’s and county’s shared tourism department.

“But it was not done without cooperation and support from multiple federal, state, county and town of Smithfield agencies,” Grice said. “Along with persistent and dedicated commercial contractors, it has truly been a team effort — a team effort that deserves our appreciation.

Construction of the county-funded portions of the trail began in 2017. According to Winslow, the county actually saved $400,000 from the original contract costs by obtaining more grant funds during the construction process.

The trail, she said, was designed to meet or exceed all Americans with Disabilities Act standards. Construction was also planned to occur outside of bat hibernation, eagle nesting and sturgeon spawning seasons to minimize environmental impacts. The height of the path’s wooden bridge over Jones Creek, which some have criticized for obstructing the view of the creek from the road, was specifically calculated to avoid direct or indirect impacts to Jones Creek’s wetlands, to include impacts from creating additional shade, Winslow said.

“When complete, the trail will truly provide a beautiful, eco-friendly opportunity to enjoy all the natural beauty we love as residents of Isle of Wight County,” Winslow said.

Construction of the town-funded segment of trail through Smithfield has yet to begin, and no date has been set yet for its groundbreaking. As of 2019, Smithfield’s portion was projected to cost anywhere from $2.5 million to $3.3 million. The town’s segment of the trail is proposed to be eight feet in width rather than 10.

Jamie Oliver, Isle of Wight’s director of transportation, served as project manager for the county-funded portions. According to Christopher Hall, district engineer for the Virginia Department of Transportation’s Hampton Roads District, about 77% of VDOT programs in Hampton Roads are delivered by local partners.

“This is a great example of how that works,” he said.

The 115th annual Smithfield High School Commencement Exercises sent the Class of 2021 into the next phase of life June... read more