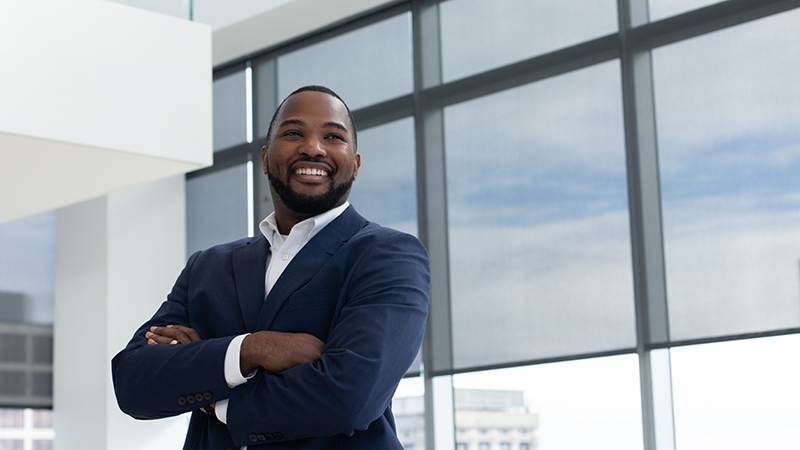 In this photo compilation, Windsor native Lloyd Eley is shown with two wind turbines in the Atlantic Ocean for which he was the site construction manager. The turbines have been in use since last fall. (Submitted Photos)

Heading up biggest offshore wind project in the U.S., Dominion Energy’s Lloyd Eley has prepared for this moment

When he travels the 27 miles from the Virginia Beach coastline to the site where two 600-foot wind turbines spin with the breeze in the Atlantic Ocean, Windsor native Lloyd Eley can’t help but be amazed by the technology and the engineering put into them.

Eley, the site construction manager for Dominion Energy’s offshore wind project, played a key role in getting the two wind turbines online last fall, and he’ll be instrumental in getting 180 wind turbines — even larger than the ones poking hundreds of feet out of the water — to generate electricity for hundreds of thousands, and potentially, millions of people.

“It’s one thing to see them from afar, and then when you’re up close to them, you realize how big they are,” Eley said. “And then to think that for the commercial-scale project, they’re actually going to be 200 feet taller than the ones currently out there, I’m in amazement of the amount of detailed engineering that goes into it and how sleek the turbine components are in general.”

But the 33-year old Eley has traveled much farther to get to this point in his career.

He grew into his interest in engineering through his father, Lloyd Eley Sr., who used to work at Community Electric Cooperative in Isle of Wight County. Eley would go to work with his father, getting introduced to the utility field early in life.

Being raised in a rural area, Eley was also exposed to science, technology, engineering and mathematics growing up, taking part in a summer STEM program at Paul D. Camp Community College in Franklin.

“That was something that definitely allowed me, as a student in middle school, to even be introduced to engineering or the science field,” Eley said, “and learn the different opportunities that were out there and available that I wouldn’t have ordinarily got based in a rural area.”

A mentor of his while he attended Windsor High School, former Isle of Wight School Board and Board of Supervisors member James B. Brown Jr., was also instrumental in Eley’s development.

“What he did was introduce me to the engineering career field,” Eley said. “And he took me on my first college tour, which ended up being the university that I attended, which was Howard University. Having that mentor there, I could see, hey, being an engineer is possible.”

Brown, a native of Carrollton who graduated from the Isle of Wight Training School and graduated from Howard University with a Bachelor of Science degree in civil engineering in 1962 before working at Norfolk Naval Shipyard, mentored students at both Windsor and Smithfield high schools, including Eley. Brown served as the school board’s first Black chairman, also serving as the chairman of the board of supervisors and, among other accomplishments, was the chairman of the Pruden Center for Industry and Technology before he died in 2015.

“There are these different career fields that are out there that you typically wouldn’t see growing up in a rural area,” Eley said, “and between those two — pairing that education at Camp as well as having a strong mentor that had a STEM background was what guided me in this direction.”

Having first-hand experience with being mentored, Eley is now in a position to mentor, and does so in college settings, at the middle and high school levels and through STEM camps.

“I know that was a driver for my decision to go down my career path,” he said.

Eley graduated from Windsor High School in 2006, and like his mentor Brown, attended Howard University in Washington, D.C., where he majored in electrical engineering.

At Howard, Eley performed research and development on different solar opportunities available at the time, along with micro-grids and how to develop them to create more substantial infrastructure at the facilities. That introduced him to the renewable energy field, beyond just learning about electrical engineering.

Four years later, Eley graduated from Howard, and he began working at Newport News Shipbuilding as an engineer for nuclear attack submarines. In that role, he was responsible for the design of the propulsion plant onboard the submarine.

“Being at that facility, I was able to learn about how to perform construction and work on large-scale projects in the marine environment,” Eley said. “That was that full-circle moment where I had gotten to research and exposure to renewable energy while I was at college, I got experience working in large construction sites in a marine environment … and when I joined Dominion Energy (in 2013), I was able to naturally progress into the engineering role.”

Eley worked through the permitting process of getting the two turbines operational and helped with its design and engineering before shifting to solar and then coming back to manage the construction of the turbines in 2019.

During that, he had to work through COVID-19 restrictions in two countries — the U.S. and Canada. Eley had to wait for ships to come more than 800 miles from Nova Scotia due to the Jones Act, which mandates ships coming from a U.S. port to anywhere in the country, including its waters, to be built and registered in the U.S., and, to be owned and staffed by U.S. citizens, hence the longer trek from Canadian waters.

There was no U.S. ship available with the needed capability to assemble the wind turbines, which is why Dominion opted to ship turbine parts from Nova Scotia to allow it to use a larger, foreign-owned vessel. It is also why Dominion is part of a consortium in building a larger Jones Act-compliant vessel.

When the first Jones Act-compliant offshore wind turbine installation vessel is complete by the end of 2023, it will make Eley’s job, and that of others heading up similar offshore projects, significantly easier, as it will be based in Hampton Roads and outfitted to handle current and next-generation technologies.

“It involves taking up all of the various components from around the world and bringing them to the Hampton Roads area to be installed offshore at the actual construction site,” Eley said.

And though his path wasn’t one he imagined, he can see how his previous experience has linked him to where he is now.

“When I look back at all my previous roles, whether it was with Dominion Energy or with previous companies I used to work for — Newport News Shipbuilding as an engineer — and I look at all the different roles that I held,” Eley said, “I can see how they all aligned, so that all the knowledge and stuff that I gained from those different roles, I was able to put in my tool belt to prepare me to be able to manage such a large-scale project.”

When he was heading up the project to put the two wind turbines in the Atlantic Ocean, he realized that while it was the first project being installed in federal waters in the United States, it wasn’t his first as a project manager.

In his first role at Dominion Energy, Eley was a renewable asset manager for solar assets the company had in California. In that role, there were different requirements within its permit that it had for operating them.

One of them was one of the first sites to use sheep to perform lawn maintenance on a solar facility, and Eley had to develop a sheep grazing plan where Dominion could have a renewable energy resource interacting with agriculture to perform vegetation management. It was the first solar facility in Dominion’s footprint in which it used sheep for that purpose.

“And that was one of the big ‘a-ha’ moments I had,” Eley said, “because when I look back at some of the previous roles that I’ve held, I noticed that a lot of those roles have involved first-of-a-kind type projects, which I think helped me with being able to navigate the construction … of the pilot project, in particular, with it being the first of a kind and then experiencing the different challenges when working with team members located throughout the world, and trying to navigate that in the midst of a global pandemic.”