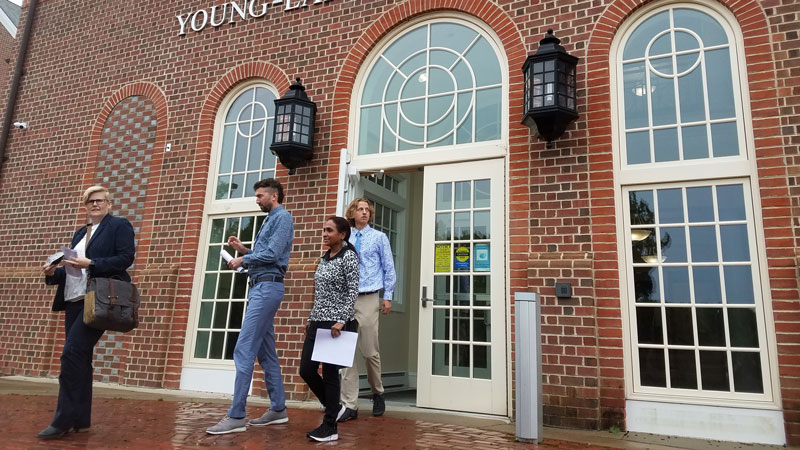 Curtis Vollmar, Scott Gilbertson and Madhu Anderson had each faced up to a year in jail for the Class 1 misdemeanor charge, but were sentenced that same day to fines of $2,000 each with $1,000 suspended on condition of good behavior for a year.

All three are from out of state. Vollmar and Gilbertson are both from Berkeley, California, and Anderson is from Wyoming. The trio had traveled with other members of the animal rights group Direct Action Everywhere on Aug. 11 to Smithfield, which is home to Smithfield Foods’ corporate headquarters, for the purpose of protesting the company’s methods for disposing of hog feces. The Associated Press reports that in 2018 a federal jury awarded more than $50 million in damages after finding the company’s practice of housing thousands of hogs together and flushing their waste into holding pits — where bacteria break down the fecal matter and it’s then sprayed onto fields — liable for the unpleasant smells rural North Carolina residents living near one of the company’s industrial hog operations experienced.

But it wasn’t what the group was protesting that resulted in the criminal charges; it was how they went about protesting. Commonwealth’s Attorney Georgette Phillips began her prosecution of the trio by showing a video of Gilbertson dancing in a poop emoji costume at the Aug. 11 Planning Commission meeting while other members of Direct Action Everywhere played loud music, used profanity and unveiled a banner behind Planning Commission Chairman Randy Pack declaring Smithfield Foods the “World’s Sh-ttiest Company.”

Phillips then called Pack and the two arresting officers, Samuel Johnson of the Smithfield Police Department and former SPD officer Donna Nolan, to the stand to testify as to the sequence of events from their perspectives.

All three defendants were represented by Sara M. Gaborik, a Richmond-based criminal defense attorney. During cross examination, Nolan told Gaborik the group of protesters had included six or seven people, not all of whom were charged. Matt Johnson in particular, who had used expletives while speaking from the lectern during citizens time and then proceeded to read from the children’s book “Everyone Poops,” was among those not charged.

During closing arguments, Gaborik had asked that the charges be dismissed on First Amendment grounds, which she argued protects people even if foul language is used.

“This was absolutely free speech,” she said.

Assistant Commonwealth’s Attorney Steve Edwards, however, countered, “There are levels of behavior that are known and expected,” and equated Gaborik’s free speech argument to calling the Jan. 6 insurrection at the U.S. Capitol by supporters of former President Donald Trump “just another tourist day.”

During sentencing, Phillips pushed for incarceration, arguing that the three had deliberately come from out of state to disrupt the meeting, but Gaborik argued against jail time given that the trio had no prior criminal history and that the coronavirus pandemic is still impacting the nation and world.

Vollmar, speaking to The Smithfield Times prior to the trial, said the group hadn’t initially planned to take their protest to Smithfield’s Planning Commission meeting, but did so after learning of the meeting while in town.

Raven Deerbrook, a Direct Action Everywhere photographer, said the group had chosen to attend the Planning Commission meeting because it was one of the few venues that allowed a forum to address local public officials.

Pack, speaking to the Times after the trial, said he found the sentence fair.

“I certainly believe in freedom of speech,” he said. “But there has to be a balance of understanding, the respect of official meetings, that you can’t just go interrupting those.”