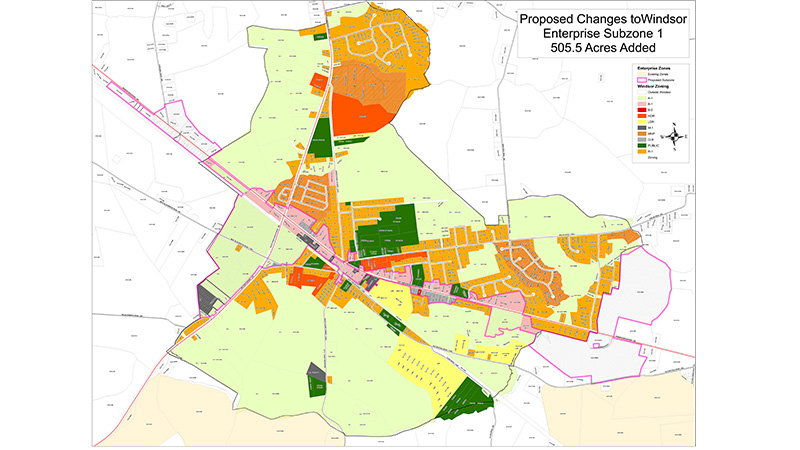 The section of the map outlined in pink represents the proposed expansion to the enterprise zone. The portions of the map with color represent parts of the Town of Windsor.

Isle of Wight County Economic Development Coordinator Nicole Talton presented the Windsor Town Council with details on the county proposal to expand its existing enterprise zone to include areas adjacent to and within the town, and the council opted to consider the matter further before making a final decision.

In a memo to Mayor Glyn T. Willis and the Town Council, Town Manager William Saunders stated that the Virginia enterprise zone program is intended to promote business development and expansion with incentives funded by cost-sharing between the state and localities.

After Talton presented the proposal and answered a variety of questions from council members, Willis said he thought it would be good for the members to take the information and ponder it a little bit, as this was the council’s first opportunity to discuss it.

“It sounds good,” he said of the expansion proposal. “It’s the unknowns that we don’t know enough about to ask maybe some different questions, potentially even consider at our next council meeting we could have a public hearing where we would invite you back and make sure the public here in town was getting the message also and so forth.

“So like I said, it sounds good; we would like to be thinking that we’re going to move forward, but at the same time just got to make sure we’ve got some time to work through this, ask some additional questions and so forth as we move forward,” he added.

In his memo, Saunders noted that Isle of Wight implemented an enterprise zone in 2010 that also includes areas within the city of Franklin and Southampton County. Currently, Isle of Wight has 2,438 acres of land within this zone.

Saunders stated that the proposed expansion to the enterprise zone would add 505.5 more acres, and Talton explained where this expansion would be located.

“The alignment here is that you’re expanding the zone that’s to the east side of town to essentially follow the (U.S. Route) 460 corridor through town, putting a continuous land segment there,” Willis said.

Saunders wrote in his memo that since its inception, the Franklin/Isle of Wight/Southampton VEZ has provided $103,155.98 in incentives to business creation/expansion.

Talton spoke about incentives during her presentation and emphasized that there is significant room for creativity in how localities can craft them.

“Local incentives are important,” she said. “The localities are responsible for doing that. They’re a critical component of the enterprise zone program, and it should be tailored to the direct needs of our businesses and our business community.”

Later she added, “Because we are in a position where it’s the county, and we have businesses in the town, that’s where we would work together with you to create an incentive. We already have these incentives that we have out there now offered by the county, but we would be able to work with you guys if there was something else you wanted to offer if a business was going to expand in one of the areas here in the town.”

She said enterprise zones could help draw a franchise or a family restaurant that would be an alternative to fast food, creating jobs, real estate tax revenue for the town and meals tax revenue.

Explaining how the enterprise zone expansion process works to the Town Council, she said, “We’re coming to you, asking for your permission, of course, to put you in the zone.”

She noted a resolution or anything written or approved was not required from the town because the action being taken is on behalf of the county, and it’s an expansion.

Talton said this situation is a little different because Isle of Wight County is special in that it has two towns.

She stated the process takes about 10-12 weeks. She has to draft an application with maps for the Virginia Department of Housing and Community Development, which then gives feedback, reviews and comments.

There have to be advertisements in the paper for public meetings, she continued, adding that there has to be two public meetings, which can be separated by a few weeks. After that, there is an adoption by the Isle of Wight County Board of Supervisors along with Franklin and Southampton County.

“So, that is pretty much it,” she said. “We’re inviting you to be a part of the zone. This is your ticket to ride the possible wave of business expansion in Windsor. Your contributions to any incentives can make the ride and the thrill even better.”

Council member Walter Bernacki asked Talton whether the county would be able to assist the town in navigating environmental restrictions that have caused some businesses to lose interest in locating in Windsor.

“We have the ability to, within our local incentives, kind of go tailor a special incentive, like if we needed to go to the Board of Supervisors to ask for certain things,” Talton said. “So we’ve got that, and we could be able to help in that regard. If it’s something that’s going to move the needle for business to come in, and if it’s some exorbitant amount of environmental fees, perhaps we could be able to help reduce some of that cost in that regard.”

Bernacki noted that Talton had mentioned some of the incentives as being part of the locality’s responsibility, such as matching funds. He asked if Windsor should set aside a certain amount of money for matching or grant funds, and if so, where Windsor fits that money into its budget.

“We still have the local grants here from the county,” Talton said. “So it may not be anything that you may be financially burdened with to be able to provide. You wouldn’t even have to necessarily provide any type of incentive.”

She added that it obviously makes things better, though, if some incentive is coming from the town, and setting aside some money in the town’s next budget may be something Windsor should look at doing.

“There are also non-monetary or financial incentives that you can also provide,” she said.

“We have to proportionalize who does what or gets what or rebates what,” she said. “So that’s where we would work with you on that.”

Willis asked if she was talking about a change in the distinct tax bills from county and town.

For businesses that want to come into the enterprise zone, Vice Mayor Greg Willis asked if they would be able to apply for grants from both the county Economic Development Authority and the town EDA.

“Yes, sir,” Talton said. “It sounds cliche, but you can pretty much do anything you want that’s within Virginia Code.”

Talton further confirmed that a business could actually apply and get two grants for relocating or locating in an enterprise zone.

“Possibly others as you look at the state and so forth,” Mayor Willis added.

Talton said, “There could be ones that are layered like that, and I’ve seen that too, just from my banking days, how businesses come in with money, and they get certain grants that help. And then there’s maybe a portion left that’s for gap funding, and maybe a municipality grant could come in to help with that.”

Vice Mayor Willis asked how active the county’s economic development department will be if a business comes into the enterprise zone and has no knowledge of the concept.

“That is something we’ve got to do a better job with,” Talton said. “We’ve got marketing materials and things out there now, but nobody really knows about them.”

She said businesses do not know where to go for the information.

“There’s information out there, but there’s not one person or place to direct them and guide them to where they want to go,” she said. “There’s some other municipalities that are doing a great job with marketing their enterprise zones, and so that is going to be one of my targets to be able to make sure that people know about the zone.”
Council member Jake Redd, who works with the town’s EDA, said he thinks everyone on the Windsor EDA would be happy to expand the zone in town, and he was happy to see the issue before the council.

He also affirmed that part of the EDA’s budget could be used for incentive issues in the future.