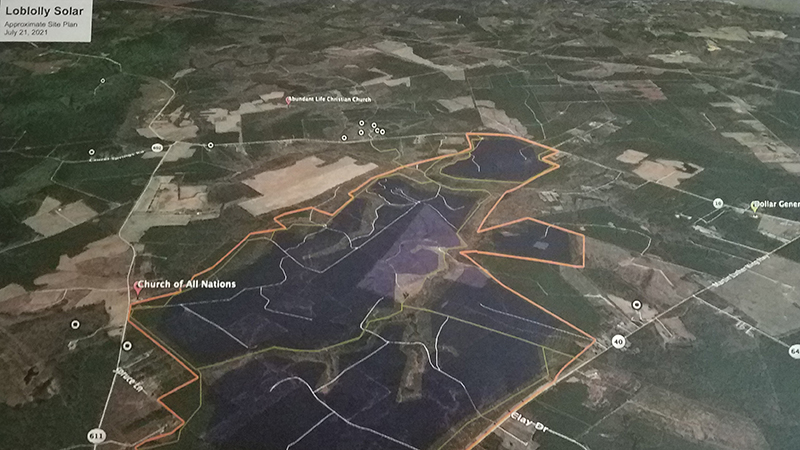 This site plan shows the proposed project area for the Loblolly Solar facility that would have been located at the intersection of routes 10 and 40 in Surry County's Spring Grove community. File photo

Surry County residents were able to pose questions to representatives of Hexagon Energy at a community meeting the Charlottesville-based company hosted July 21 concerning its plan to construct a 150-megawatt solar farm at the intersection of routes 10 and 40 in the Spring Grove area.

The Loblolly Solar project is proposed to be sited on approximately 900 acres of timberland, and bring 205 jobs and roughly $16 million in taxes for the county over the project’s 40-year lifespan.

But of the dozen or so residents who attended the meeting at Surry’s community center on Enos Farm Drive, some aren’t convinced the benefits will outweigh the impacts to their properties and the county’s rural quality as a whole.

“This county’s a beautiful county … but it’s just getting abused over and over again,” said Joyce Chitty. “We’re getting nothing.”

She’s also concerned that the clearing of the forestland to make room for the solar panels may cause flooding on her property if stormwater management measures aren’t taken.

“If something from that creates a problem for me, can I come to you?” she asked.

What are “the citizens going to get?” asked Albert Shaw.

Despite the proposed revenue, county real estate taxes have already gone up, he said, referring to a 6-cent increase that took effect July 1 at the start of the county’s 2021-2022 fiscal year.

To answer Shaw’s question, Drew Price, president and chief development officer for Hexagon, said the company could potentially set up a foundation that could offer scholarships to local high school graduates or fund other community efforts.

“We don’t want to run that foundation … it would be a foundation that residents could be members of,” Price said. “How those funds are used will be up to y’all.”

Henry Sharp then brought up a mysterious illness that’s been causing birds to fall from the sky in Virginia and other East Coast and midwestern states. The U.S. Geological Survey, which began receiving reports concerning the illness in May, states its symptoms include eye swelling, crusty discharge and neurological signs.

“Concentrated” solar farms, so termed for their use of mirrors and towers to concentrate and direct sunlight to a collector, where it’s turned into a source of heat to power an electrical generator, have been known to pose a threat to birds, Hexagon officials said. But the photovoltaic panels the company is proposing, which convert sunlight directly into electricity, haven’t been shown to pose a danger.

The company has requested four approvals for the project: a comprehensive plan amendment, a rezoning, a conditional use permit and a resolution declaring the proposal “substantially in accord” with the amended comprehensive plan. The matter was discussed at the Surry Planning Commission’s July 26 meeting and is tentatively scheduled for a public hearing on Aug. 23.