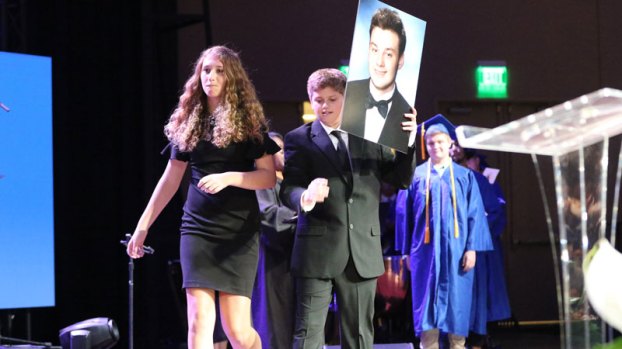 It’s been 143 days since a Smithfield police officer knocked on Christopher McMillian’s door in the middle of the night and told him his son, Austin, wouldn’t be coming home.

“I don’t think I’ll ever lose the amount of days,” McMillian said. “They just stick with you.”

The 18-year-old had been shot while riding in the back seat of a car on John Rolfe Drive with two fellow Smithfield High School students and a recent graduate the evening of March 30. He died of his injuries at Riverside Hospital in Newport News just after midnight March 31.

That morning, he heard the name Charles Wills for the first time in his life.

According to a criminal complaint Smithfield Police Lt. Patrick Araojo filed on March 31, Wills, 18, had allegedly been “playing with” his father’s gun while riding in the car with Austin. Both teenagers had allegedly consumed narcotics earlier that day and Austin, according to the complaint, had been in the process of rolling a marijuana cigar when Wills is alleged to have “unintentionally discharged the firearm,” causing a single round to strike Austin in the chest.

“He had been hanging out with this kid for less than a month,” McMillian said.

The other two teens, particularly the car’s 19-year-old driver, had been longtime friends of Austin. The fourth occupant of the vehicle was a juvenile, according to a statement Smithfield Deputy Police Chief Chris Meier provided to The Smithfield Times on April 6.

Austin had already accumulated enough credits to graduate high school early, his father said, but had chosen to take two extra courses during the spring semester and graduate with the rest of his class in June. That’s apparently when and how he met Wills.

Police arrested Wills on March 31, charging him with one count of involuntary manslaughter, and added a second charge — reckless handling of a firearm — on April 2.

Involuntary manslaughter, according to Isle of Wight Commonwealth Attorney Georgette Phillips, carries a sentence of one to 10 years in prison. To convict, the prosecution need only prove Wills caused Austin’s death — even if the killing was unintentional — by committing an unlawful, but not felonious, act or prove Austin’s death was the direct result of negligence or carelessness “so gross, wanton and culpable as to show a callous disregard of human life,” Phillips said.

If convicted on both charges, Wills faces a maximum of 15 years in prison. While there is no parole in Virginia, state law does allow the Department of Corrections to provide a “good time credit” of 15%, Phillips said, which would result in a defendant potentially serving only 85% of his or her sentence. That means Wills could potentially be released by his early 30s, if convicted of both charges but given less than the maximum sentence.

“He’ll be 30 years old, have pretty much his whole life,” McMillian said. “My son doesn’t. It just doesn’t make sense.”

Were the commonwealth charging him with second-degree murder, Wills, if convicted, would face a five- to 40-year prison sentence on that charge alone. But to convict, Phillips said the prosecution would need to prove not only that Wills killed Austin, but that he did so with malice.

Austin’s father believes the commonwealth can indeed make such a case.

McMillian said he received a phone call from the vehicle’s driver, whom he did not identify by name, around 6:30 a.m. the day after the shooting. As McMillian recalls the conversation, the driver told him Wills had been arguing with Austin and at one point, allegedly aimed the gun at him and demanded he hand over a water bottle.

“You don’t pull a gun and point it at somebody during an argument and then accidentally shoot them, in my opinion, it just doesn’t make sense,” McMillian said.

Phillips neither confirmed nor denied McMillian’s version of events, stating only that she was “not allowed to comment on the specific facts of the case,” since it is still pending.

But the April criminal complaint for the reckless handling charge does state Wills was “pointing the firearm at the victim” when it was discharged, an allegation that had been absent from the involuntary manslaughter complaint. The reckless handling complaint further alleges that Wills “ran from the vehicle and disposed of the firearm by throwing it over a fence” into the back lots of businesses along Battery Park Road after the shooting.

As of April 1, the gun hadn’t been found, according to the reckless handling complaint.

“They won’t say if they found the gun or not; they just say it’s an ‘active investigation,’” McMillian said.

Both criminal complaints allege Wills “admitted to” the presented facts when questioned by police, though Wills pleaded not guilty at his July 28 arraignment. Wills has been out on an unsecured bond since his arrest, Phillips said. His next court appearance is scheduled for Oct. 6, she said, adding so far, there have been no delays imposed due to the nationwide coronavirus resurgence spurred by the more contagious delta variant.

According to Wills’ attorney, J. Ashton Wray, the events of March 30 “are really kind of uncontested.”

The gun, Wray said, had been laying on the car’s center console between the driver’s and front passenger’s seats when Wills picked it up and started “horsing around with it.”

“He takes a clip out of the gun,” Wray said, “but does not think to check whether there’s ammunition in the chamber,” nor does he realize “his finger’s on the trigger.”

Wray then described Wills as having “unconsciously or consciously” squeezed the trigger.

He then characterized the incident as “a terrible example of why young people should not be carrying guns.”

“When kids carry guns, guns go off and people get hurt … you’re seeing it every day,” Wray said.

But Austin’s father isn’t buying the narrative of horseplay that ended tragically.

When police characterized the shooting as unintentional, “it wasn’t disappointing; it was infuriating,” McMillian said. “It’s like you’re not even trying.”

McMillian also resents the department’s not informing him of the incident until after his son died, and takes issue with its allegation in the manslaughter complaint that his son had consumed narcotics and marijuana.

“I have no clue what the Police Department is talking about,” McMillian said. “This is one of the problems with their handling of this case.”

According to the state Office of the Chief Medical Examiner’s certificate of analysis, Austin’s toxicology screening detected “no drugs and/or drug classes” in his system.

“He was a good kid,” artistic, and planning to go to college, McMillian said. “They had a memorial up at his job” at the Carrollton Car Wash.

Meier would not comment on McMillian’s dissatisfaction, nor the alleged argument and drug use, nor why the department opted to charge Wills with manslaughter, and not murder.

“This is currently an active case,” Meier said Aug. 18 via email.

According to Wray, the four teens had been traveling together for the purpose of buying marijuana. One of Wills’ friends, Wray said, had been robbed while attempting to buy marijuana in Portsmouth, so Wills had taken his father’s .40-caliber pistol along as a precaution.

“To my knowledge, I don’t know that they had smoked marijuana at all … they were looking to buy some marijuana to smoke,” Wray said.

Wray denied the criminal complaint’s allegation that the teens had consumed narcotics prior to the incident. Marijuana is not a narcotic, he said.

Isle of Wight County Schools awarded Austin’s high school diploma posthumously to his family and, at Smithfield High’s June 12 graduation ceremony, held a moment of silence and placed his cap and gown on the seat he would have occupied.

Wills was not present at the ceremony, nor was his name called, McMillian said.

“He is not a student at this time,” said Lynn Briggs, spokeswoman for Isle of Wight County Schools.

When Austin’s name was called, his younger brother and sister carried his senior picture across the stage.

“It’s tough, man,” McMillian said, “Especially when you’ve got siblings. You can’t just mourn and grieve all day for yourself. You’ve got to be tougher for them. I’ve got a 13-year-old daughter, about to turn 14, who lost her best friend.”

His 12-year-old son also now has no one to play basketball with at home, except for McMillian.

“Some days you get off work and you just want to relax,” McMillian said. “That’s where his brother came in.”

But having down time isn’t what he finds himself missing the most.

“It’s the little things,” McMillian said. “He [Austin] was a notorious sock thief. I would go in and my sock drawer would be empty. So I went and bought a pack of socks. Next week, sock drawer empty … I laughed about it then, but now, now I have too many socks.”