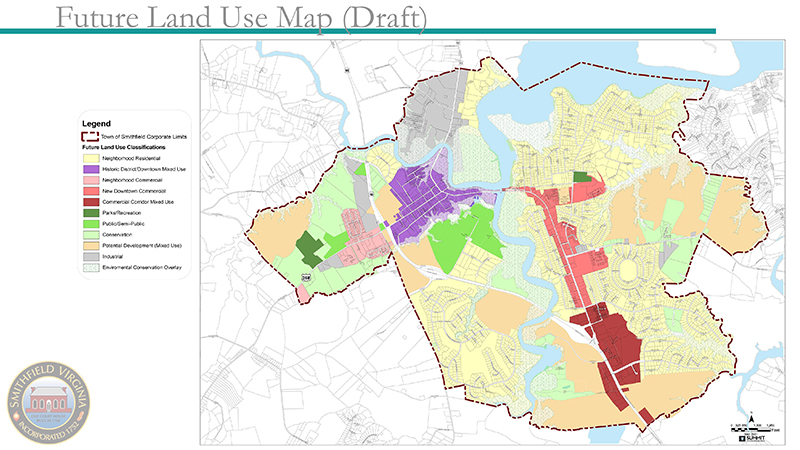 Three schools of thought emerged on Aug. 24 with regards to redoing the land use map in Smithfield’s comprehensive plan.

Anne Darby of Summit Design and Engineering, who’s serving as the Planning Commission’s outside consultant, has recommended that Smithfield create a more dense, walkable area along the South Church Street corridor — essentially creating a second downtown east of the Pagan River. Based on surveys results from 454 town residents, the firm is recommending continuous sidewalks throughout the entire town and, at minimum, a painted bicycle lane along all town-maintained roads.

Changing the plan’s future land use map, she said, is much like the orthodontics process.

“Your vision is of a great, straight smile and in order to do that, you’ve got to put the braces on and eventually, over time, the teeth straighten out,” she said.

With the map, “The land use character doesn’t have to be the same in 20 years, so change the zoning, change the setbacks, change height, change the parcel sizes, for example,” Darby said. “What happens is that you start to train new growth to become that walkable area.”

Then there’s Planning Commission Chairman Randy Pack, who’s less concerned with the types of new development the town may see, and more concerned with its outward appearance.

“If you go to Colonial Williamsburg or James City County, you see brick everywhere; you see really nice, attractive buildings,” Pack said. “Wendy’s out there is a great example. We have a nice Wendy’s.”

Commissioner Dr. Thomas Pope argued that by keeping the vast majority of developable parcels in town zoned community conservation — the most restrictive use — nearly all developers must make their case to the Planning Commission rezoning before the project can proceed, giving the commissioners maximum oversight.

The comprehensive plan’s land use map won’t actually change anyone’s zoning, according to Town Manager Michael Stallings. But it would give the commissioners a basis for approving a rezoning application or denying one should a proposal not align with the Commission’s desires for future land use.

Per state law, a locality’s comprehensive plan must be revisited at least once every five years “to determine whether it is advisable to amend the plan.” Smithfield’s hasn’t seen major changes since 2009.

“The point is to be prepared so that whenever zoning does come up, the comprehensive plan is in place … it gives you leverage,” Darby said.

The firm’s draft future land use map shows a proposed “new downtown commercial” and “mixed use” corridor spanning from the east end of the Cypress Creek Bridge down both sides of South Church Street to its intersection with Smithfield Boulevard, and along parts of John Rolfe Drive. There’s also a proposed “neighborhood commercial” district spanning from West Main Street’s intersection with Great Spring Road to Farmers Service Ace Hardware. But all of that could change depending on the Planning Commission’s wishes.

“It’s a straw man; it’s meant to be battered around,” Darby said.

But to change the land use map to align with a new vision, the commissioners must first agree on what that vision should be.

Based on the 454 surveys, the firm recommended the following in its July vision, goals, objectives and strategies report:

“Smithfield is known as a comforting place. In our buildings, streets, and neighborhoods, there is a charm that is present and attractive. The vibrant and productive local economy is supported by the Town’s excellent network of paths and green spaces. From border to border, Smithfield is a cohesive fabric of opportunities to enjoy life.”

But Pack, who also serves as the Smithfield Town Council liaison to the Planning Commission, asked that Darby rework the wording to potentially include language from a lengthier vision statement the Town Council adopted in 2019. That statement, which is two pages in length and includes photos, breaks down the overall vision into seven categories: managed growth and beauty, economic development, historic preservation, cultural amenities, community pride and inclusion, public service and infrastructure, and stewardship and governance. The statement, he said, took two days for the Council to craft at a professionally-managed retreat.

The Planning Commission has asked Darby to return for another work session on Sept. 15, where the commissioners will discuss her revisions to the vision statement.

Editor’s note: A previous version of this story listed an incorrect date for the next comprehensive plan work session.