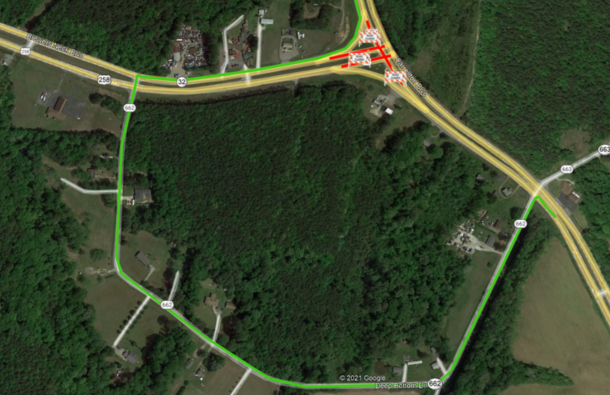 In red are the lanes of Route 17 that will be closed. In green is the signed detour. Submitted | VDOT

Starting as early as Sept. 15, the Virginia Department of Transportation will close the southbound lanes on Route 17 (Carrollton Boulevard) at its intersection with Route 258 (Brewers Neck Boulevard).

According to VDOT spokeswoman Lindsay Denietollis, the closures will occur at night from 7 p.m. to 6 a.m. The intersection will reopen during the day.

The closure is estimated to last through Sept. 19. During this time, motorists traveling north on Route 17 will not have the ability to make a left turn onto Route 258, and instead will be detoured onto Route 662 (Deep Bottom Drive) before arriving at the intersection.

Those passing through Isle of Wight County from the James River Bridge to Suffolk or Portsmouth will need to turn right onto Route 258 upon reaching the intersection, then make a left onto Deep Bottom Drive and turn right back onto Route 17.

Motorists coming from Route 258 and needing to head north or south on Route 17 will need to turn right onto Deep Bottom Drive, then turn onto Route 17.

The closure and detour will not block access to businesses along Route 17.

The VDOT project entails adding a left turn lane off the southbound lanes of Route 17 leading to a proposed condominium development known as The Crossings, adding an additional left turn lane leading from the highway’s northbound lanes to Brewers Neck Boulevard and one through lane from Brewers Neck Boulevard into the development. The project also entails work on the intersection’s traffic signals, roadway elevation, drainage and paving, with all work expected to be complete by fall 2022 depending on weather conditions, according to VDOT’s website. VDOT budgeted $3.25 million for the work but in May requested and received Isle of Wight County’s pledge of $53,000 in local dollars to cover an anticipated overage.

Surry School Board to vote on LGBT policies tonight