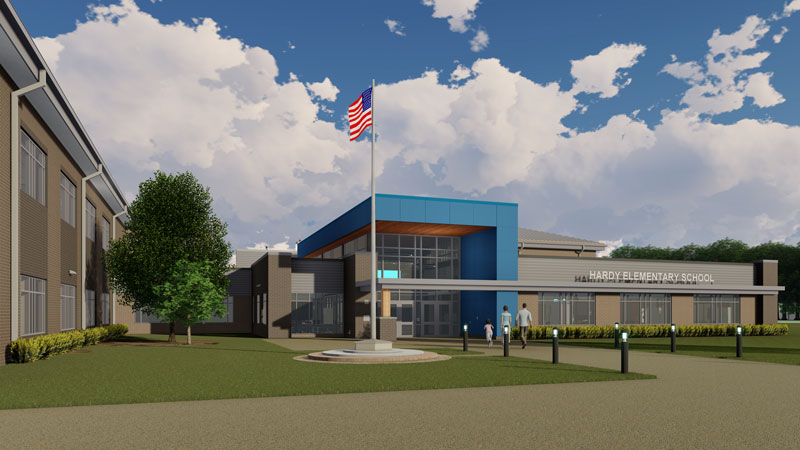 An updated rendering of the new Hardy Elementary shows what the school will look like when complete. Submitted | Isle of Wight County Schools

Construction to begin in December

Isle of Wight County’s Board of Supervisors voted unanimously with one member absent during a special called meeting Sept. 21 to approve a new guaranteed maximum price of $36.8 million for building a replacement Hardy Elementary School.

The project’s construction management firm, M.B. Kahn Construction, had previously told Isle of Wight’s School Board on Sept. 9 that the new school could be built for a guaranteed maximum of $33.7 million, but that price didn’t include a firm quote for steel. Bill Cram, Kahn’s executive vice president, then told the supervisors on Sept. 16 that the currently inflated cost of steel would add another $2.7 million to the overall price. During the five-day window between the Sept. 16 and 21 meetings, the steel quote had risen another $300,000 to roughly an even $3 million, bringing the project’s overall guaranteed maximum price to $36,868,639.

According to Cram, the inflation is largely due to a pandemic-induced supply chain breakdown. Last year, in the early days of the coronavirus pandemic, the construction industry continued to operate as a designated essential service, but a number of the industry’s suppliers were forced to shut down, resulting in skyrocketing demand and months-long delivery delays, he said.

With the Board of Supervisors’ vote on record, Isle of Wight County Schools Superintendent Dr. Jim Thornton confirmed the new maximum price is now, in fact, guaranteed — meaning any further price increases will fall to Kahn and not the county. Should costs come in below the maximum, any savings will be returned to the county.

The Board of Supervisors had borrowed $34 million in 2020, intending to put $27 million toward Hardy and use the rest for other capital needs, such as replacing emergency vehicles. At the time, the board had planned to borrow another $30 million-plus in 2022 to replace another 1960s-era school, Westside Elementary, and raise real estate taxes by 4 cents to pay off both bonds.

County Administrator Randy Keaton has now proposed Isle of Wight borrow $13.4 million in 2022 instead of the planned $30 million-plus, and use the majority of the second loan to cover the millions of dollars for Hardy over what had been budgeted last year.

Doing so would allow the county to raise real estate taxes by 2 cents instead of 4, starting July 1, 2022, he said. But Keaton’s plan would effectively defund and postpone the Westside project indefinitely.

“Hopefully (Westside) gets brought back sooner than later; the growth is not going to stop,” Thornton said. “That overall plan was for growth. It wasn’t just to replace old buildings.”

Public opposition at recent School Board meetings to Isle of Wight County Schools’ equity and inclusion initiatives and other “actions by our school system,” according to Windsor District Supervisor Joel Acree, has caused some of his constituents to ask him to consider defunding Hardy. But Acree ultimately voted with the other three supervisors present to approve the new maximum price. The Board of Supervisors has not taken a formal vote on Keaton’s proposed 2-cent tax increase.

The proposed 4-cent tax increase was originally slated to begin this year, but the Board of Supervisors voted in May to defer it to 2022 in hopes that Virginia’s General Assembly will reconsider allowing the county to temporarily raise its sales tax 1% instead.

Senate Bill 1170 would have made Isle of Wight the 10th Virginia locality permitted to enact a 1% sales tax hike for the duration of school construction projects, provided a majority of county voters approve the measure via a referendum. The bill passed Virginia’s Senate 31-8 but was tabled in a House of Delegates finance subcommittee. County officials say the 2-cent tax increase may not be needed if the General Assembly resurrects the sales tax bill in 2022.

The new two-story school will have a capacity of 887 students and will be built in such a way that it could be expanded. The current one-story Hardy, by comparison, has a capacity of 657 students, according to a press release Isle of Wight County Schools issued following the vote.

The school’s floor plan is modeled off Florence Bowser Elementary School in Suffolk.

Construction was originally slated to begin in March, then moved to June, then delayed again to October. Now, according to the press release, construction is anticipated to begin in December. The new school is expected to be finished by the summer of 2023.