Statewide, the COVID-19 resurgence fueled by the more contagious delta variant has been gradually declining since mid-September, but that isn’t true of Isle of Wight County.

It also ties with Jan. 16 as the third-highest daily new case count for the county since the start of the pandemic in March 2020.

According to Virginia Department of Health data, the delta variant is now the predominant coronavirus strain in Virginia’s Eastern District, which includes all of Hampton Roads and the Eastern Shore. Delta now accounts for roughly 67% of all Eastern District cases, and the majority of hospitalizations and deaths.

Isle of Wight’s seven-day average for new cases per 100,000 residents stood at 47.6 as of Oct. 5, which is nearly 26% higher than the city of Suffolk’s average for the same week.

There have been 43 outbreaks in the Western Tidewater Health District since the start of the pandemic. The district includes Isle of Wight and Southampton counties and the cities of Suffolk and Franklin.

According to the VDH’s online outbreak tracker, which lists outbreaks in K-12 schools, daycares, medical facilities, long-term care facilities and colleges and universities, there are no active outbreaks at any of these types of facilities in Isle of Wight County currently.

In Surry County, which is in the Crater Health District, 57.7% of the population has received at least one dose and 52% is fully vaccinated. 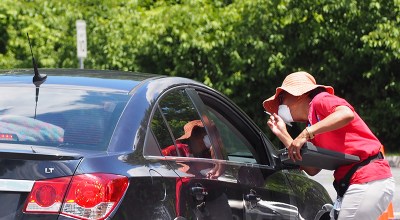