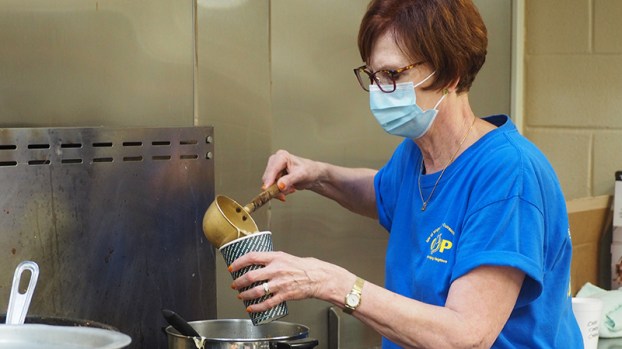 The formerly buffet-style luncheon took a drive-through format this year in light of the continued COVID-19 risk. Meals included a choice of homemade soups served in cups, two ham biscuits, a homemade dessert and a bottle of water for $5 apiece. The proceeds will benefit Isle of Wight County’s Department of Social Services, specifically its energy assistance program, which helps eligible households offset the expense of heating or cooling their homes.

The event was to start at 11 a.m., but some cars arrived ahead of time and were not turned away.

Volunteers included Scouts with Smithfield’s Troop No. 3, Christian Outreach members and congregants from a number of local churches, among others.

“I’m just happy we’re getting back to some normal things; everything’s a blessing,” said Roger Guill, a Troop No. 3 scout leader working the event.

Volunteers had prepared just over 500 packages of soup, ham biscuits, desserts and bottled water, but ran out of the biscuits and water before the event ended at 2 p.m., at which point the volunteers began offering two servings of soup and two desserts for $5, Lawrence said.

Lawrence called the event “a huge success,” particularly considering that it was limited to drive-through service.

“For the most part, the rain held off,” she added.