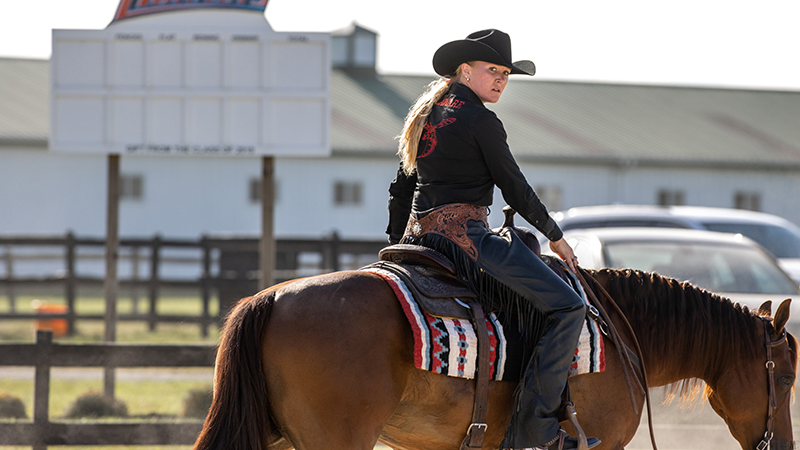 Equestrian Grace Wilson has been putting on a show this season.

A four-year starter for the Delaware State University women’s team, the Smithfield resident has received national recognition for her performance.

The National Collegiate Equestrian Association cited her as its Reining Rider of the Month for October, recognizing her 2-0 record during Oct. 1-2 competitions.

The senior posted a career-high 78.5 score in a victory against her Tennessee Martin opponent, earning Most Outstanding Performer, for which she received a medal. Her effort resulted in the Eastern College Athletic Conference naming her Oct. 5 as the Reining Rider of the Week.

“I’m getting into my comfort zone,” said the daughter of Robert and Laura Wilson. “The last couple of years I was in a different place mentally.”

She said she tended to overthink her routines, which created stress, but has been doing better at not overthinking this season.

She achieved the 78.5 score by competing before her opponent’s turn. “Normally I despise going first,” she said, noting that going second allows her to watch her opponent’s performance to gauge how the horse performs.

“I was focusing on the ride itself and what the horse could do,” she said. “He’s very talented. He’s a well-known horse in the ratings. I knew he would do well. It was up to me to not screw up everything.”

She is the team’s top reining rider. “She’s a beautiful rider. She came to us with these skills, ” Delaware State equestrian head coach Jennifer Ridgely said. “She’s very natural.

“She has soft hands,” the coach continued. “She’s a pleasure to watch. She’s just so clean.”

Wilson has been winning for the program since her freshman season. In 2019, she helped the reining squad reach the National Collegiate Equestrian Championships semifinals, the first reiners in program history to advance that far. She finished with a 3-0 record in the tournament.

Also in 2019, she represented the United States at the Global Youth Reining Cup in Italy after being chosen by a National Reining Horse Association panel. She won the Invitational Global Cup division.

Ridgely said Wilson has done so well this season because she understands the format, which she described as “very different and unique.”

Because they don’t compete on their own horse, riders have four minutes — the warmup — to get to know the horse. Riders complete specified maneuvers, such as spins to the left and to the right, and they are done in a big, fast circle and small, slow circle, according to Ridgely.

“The spins are very fast,” the coach said. “The maneuvers in the reining are a high-skill level.”

Wilson has one year remaining of eligibility, which she said she will complete in a master’s program. Already a pilot, she wants to be a commercial pilot.