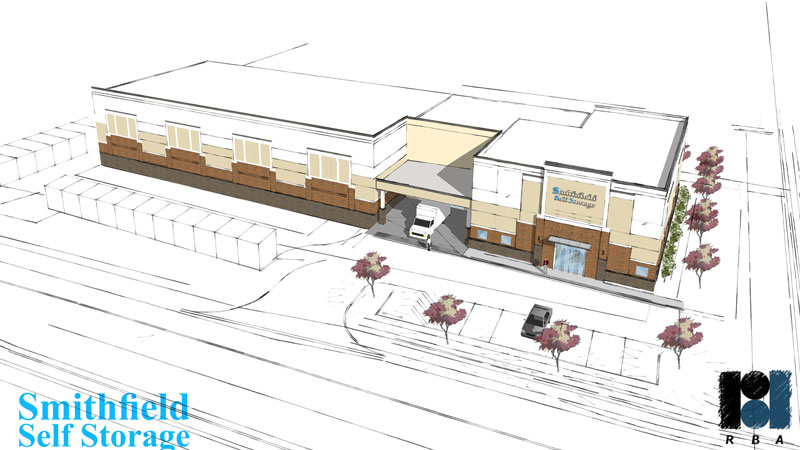 Smithfield’s Planning Commission will delay its decision until January on whether to allow a climate-controlled self-storage business in town to expand.

Smithfield Self Storage opened a roughly 23,000-square-foot, three-story facility at 201 Battery Park Road in 2020 after securing a waiver in 2017 to allow for a floor area ratio greater than allowed under the town’s zoning ordinance. Now, Smithfield Self Storage manager Trey Gwaltney has requested another waiver to more than double the building’s square footage.

The 1.47-acre parcel on which the addition would be located is currently permitted a FAR of up to 0.5 under the town’s ordinance, which would allow a maximum floor area of 32,110 square feet. But Gwaltney hopes to build a 39,150-square-foot, three-story addition, which would result in a FAR of 1.03.

In a letter to town officials dated Nov. 16, Gwaltney states that in the 10 months the climate-controlled facility has been open, all 145 units have been rented.

“While we do maintain a waiting list that is now several pages long, we still turn away business from customers who need storage immediately … usually at least two to three daily,” Gwaltney writes.

Prior to tabling the matter, Commissioner Julia Hillegass had made a motion to approve the requested waiver as presented, which failed in a 3-4 vote.

Hillegass argued the facility wouldn’t be the first three-story structure in town, and agreed with Gwaltney that additional climate-controlled self-storage units are needed.

“If you call … everybody is sold out,” she said.

But Planning Commission Chairman Randy Pack and Commissioner Michael Torrey both expressed reservations concerning the size of the proposed facility.

“I’m not saying I’m opposed to what’s going on … I personally need to get a little more comfortable before I’m willing to vote in favor of this,” Pack said.

Vice Chairman Charles Bryan and Commissioner Raynard Gibbs joined Hillegass in voting in favor of her motion, while Pack, Torrey, and commissioners Michael Swecker and Dr. Thoams Pope voted against it.

As the request is for a Planning Commission waiver, the commission has the final say as to whether it is granted, as opposed to its typical role of making a recommendation to Smithfield’s Town Council. However, should the Planning Commission ultimately vote to deny the request, Gwaltney has the option of appealing the decision to the Council.