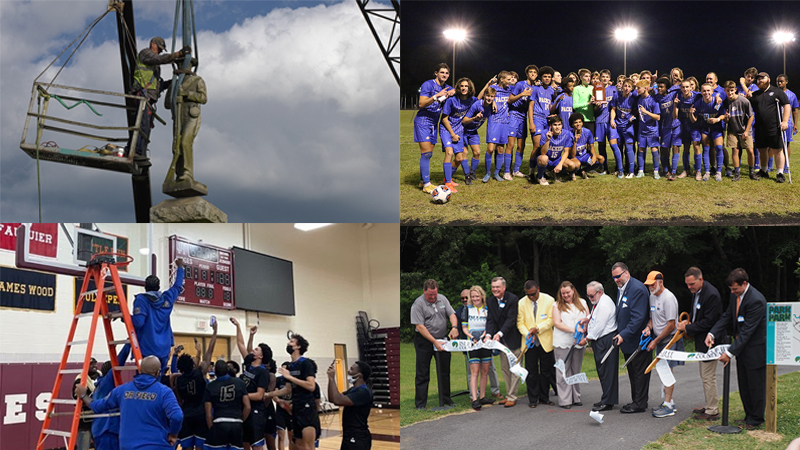 It was a long year full of ups and downs for Isle of Wight and Surry counties. Here’s a look back at the stories that dominated the headlines for the first six months of 2021. We’ll review July-December in the Jan. 5 edition. Stories are listed on the date of the edition in which they ran.

January 6 — Local citizens are encouraged to check their lottery numbers. A $2 million Powerball ticket sold in August 2020 at the Rushmere Food Mart remained unclaimed, while a $100,000 winning ticket sold at Darden’s Country Store for the New Year’s Millionaire Raffle was out there somewhere.

January 13 — The second round of #IsleShopSmall CARES-funded gift certificates to local businesses sold out, much like the first round in November 2020. Both rounds of the program generated $813,480 for 105 local businesses.

January 20 — Windsor announced plans to poll its citizens on the idea of moving Isle of Wight County’s Confederate monument to the town’s municipal cemetery.

January 27 — With the COVID-19 vaccine distribution program in its infancy, shortages forced a shift in distribution methods. The Western Tidewater Health District was getting only about half of the vaccine doses it believed it should be getting. As of this edition, 5,501 doses had been administered in Western Tidewater.

February 3 — Isle of Wight received about 1-2 inches of snow on Jan. 28, and it was enough to provide a bit of fun for local youngsters.

February 17 — Reversing talks of a citizen survey, the Windsor Town Council outright rejected the idea of Isle of Wight County’s Confederate monument being relocated to the town’s municipal cemetery.

February 24 — Isle of Wight County’s Board of Supervisors voted unanimously to relocate its Confederate monument. The new home was yet to be determined at that time.

March 3 — Legislation that would have allowed Isle of Wight County voters to OK a sales tax increase to pay for new school construction died in a General Assembly House of Delegates Finance subcommittee.

March 17 — Gov. Ralph Northam signed Senate Bill 1157 into law, forcing all local elections to move to November in the future.

March 24 — A tornado touched down in southern Isle of Wight County around 9:30 p.m. March 18, damaging Collosse Baptist Church as well as other buildings, including homes and outbuildings.

March 31 — Former Surry County Carsley District supervisor Kenneth Holmes, who had resigned his seat Feb. 28 due to health reasons, passed away on March 23.

April 7 — Austin McMillian, 18, died in a shooting that happened in Smithfield late on March 30. Charles Wills, 18, was charged in the death.

April 14 — Video from a December 2020 traffic stop in Windsor went viral and caused a nationwide outcry. U.S. Army 2nd Lt. Caron Nazario filed a lawsuit in federal court April 2, accusing two Windsor Police Department officers of holding him at gunpoint and assaulting him during the traffic stop on U.S. Route 460. Both officers, Daniel Crocker and Joe Gutierrez, were still on the force when the video came to light.

April 21 — Windsor Police Department Chief Rodney Riddle told media Gutierrez had been fired in the week after the video came to light because Riddle “lost faith in his ability to continue to serve the community.”

May 5 — Mary Cole was recognized as 2019 Citizen of the Year in a delayed ceremony hosted by the Smithfield Rotary Club and Smithfield Ruritan Club.

May 12 — The Isle of Wight Confederate monument was removed on May 8 from outside the county’s courthouse, where it had stood for 115 years. It was relocated to land owned by Volpe and Jennifer Boykin, who had submitted a proposal to give it a new home.

May 19 — Smithfield’s Planning Commission held a public hearing on the Mallory Scott Farm development, drawing more than 20 speakers, all opposed to the project, even after it was scaled down to 812 homes from the original 1,106-home proposal.

May 26 — Isle of Wight County approved about $53,000 for an intersection project in Carrollton to cover a budget shortfall announced by the Virginia Department of Transportation.

June 2 — Isle of Wight Academy graduated 40 students in its Class of 2021 graduation ceremony May 28.

June 9 — After several weeks of dialogue on the issue, Smithfield’s Town Council voted 4-2 to kill a proposed ordinance amendment that would have reversed the town’s prohibition on backyard chickens.

June 23 — Isle of Wight County’s portion of the Carrollton to Smithfield park-to-park trail was completed and opened to the public with a ribbon-cutting on June 21.

June 30 — The boys’ soccer team continued the winning ways at Smithfield High School, notching another state championship for the school on June 23 at home against Jefferson Forest High School. Coach Jason Henderson said, “Words can’t describe what this feels like.”